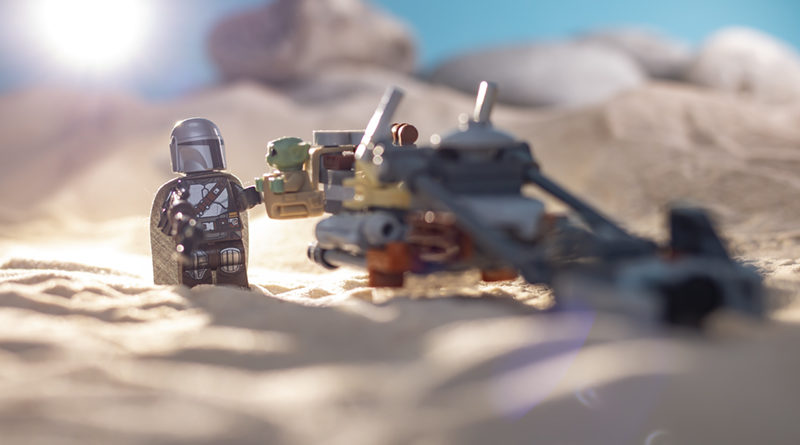 LEGO Star Wars 75299 Trouble on Tatooine entices fans with the promise of a beautifully-designed, must-have minifigure, then lets them down with an uninspired afterthought of a build. This is definitely not the way.

Being a LEGO Star Wars fan isn’t always easy. Throughout the years there have been some incredible LEGO models, recreating fan favourites from all eras across films, cartoons, books and even video games. But while there can be few complaints about the volume of Star Wars LEGO sets on offer, one recurring gripe is the cost. Star Wars sets always seem significantly more expensive, and while the licence fee has to be taken into account, often it feels like fans are being short-changed.

The LEGO Group is at least trying to address the issue of cost, with the recent 75301 Luke Skywalker’s X-Wing Fighter and 75300 Imperial TIE Fighter sets offering fans a cheaper way to get hold of iconic ships. But then in the same wave comes 75299 Trouble on Tatooine, a set offering an incredibly desirable character, from an insanely popular television series, at a price that deserves to be baulked at. But ignoring the retail value for a moment, is the set actually any good?

The set begins with the assembly of Din Djarin’s Tatooine speeder bike, and it’s actually very straightforward to put together. Built on a 2×3 plate with 2×1 curved slopes at the front, it feels a lot more compact than it looks, but despite its size there are still some nice pockets of detail.

Each side engine consists of two 1×1 plates with light attachment, a 1×1 outside bow, a 1×1 round plate with horizontal shaft, and a light grey mini-antenna, which is quite a rare piece (appearing in only 11 other sets). Attached to the back is Grogu’s adorable baby carrier and a brown backpack, presumably full of Mando’s essential supplies and weapons – although you’ll have to use your imagination on this one, as it doesn’t actually open.

The construction of the front handlebars demonstrates a neat little design too, with the front flaps attaching to a 1×2 hinge bracket. This allows for a little angled variation in connecting the entire front end to the handlebars. And then, as quickly as it starts, it’s over. This is one of the main problems with this set: it’s three small, simple builds that are put together too quickly with very little effort or enjoyment.

The Tusken Raider hut, while admittedly a unique addition to the LEGO Star Wars universe, is incredibly basic, using five simple panels constructed from 1×3 wedge plates attached to hinges for the roof, and 2×4 plates or tiles for the walls. There is a small amount of detail inside, consisting of two seating areas (brown 1×2 grilles and 1×2 slopes), a table (a light grey 2×2 dish) and a fire pit at the front, but that’s your lot.

What’s worse is the walls are so gappy that it looks both unfinished and unrealistic. If a Tusken Raider actually built a house like this, the minute the Dune Sea whipped up a sandstorm they’d be done for! For some reason the hut hinges out giving more space to the build, but it’s difficult to see what the point is and what extra play value this actually offers.

The last build is the Tusken ballista. It’s the most involved aspect of the set, but it feels overly complicated for what it is, and the final design just looks a bit messy. It’s certainly not something that’s instantly recognisable and doesn’t look great on display. It fires a missile from the front, so it does have some playability to it, but this set would’ve been far better if the parts were put to use improving the Tusken hut.

Let’s face it: the opportunity to add Din Djarin in his Beskar armour to a minifigure collection is really the only reason anyone is interested in this set. Thankfully, it’s a beautifully-designed minifigure. There’s exquisite printing on the torso, both front and back, which is continued down through the legs and – unusually for a LEGO Star Wars set – there’s also some really excellent printing on the arms, even featuring the Mando’s mudhorn insignia. He comes equipped with both his sidearm and Amban rifle.

Accompanying the Mandalorian is quite possibly the cutest minifigure ever created: The Child, also known as Baby Yoda, or Grogu. You’d need a heart of stone to ignore those puppy dog eyes and that adorable face. As in 75292 The Mandalorian Bounty Hunter Transport and 75318 The Child, Grogu has a specially-moulded rubber head piece and a dark tan toddler body with robe printing detail.

The third minifigure included is a Tusken Raider. It’s the same design we received in 2020, but still a very decent rendition of a sand person. He comes complete with a brick-built gaffi stick.

A lot of fans only buy sets for the minifigures, and even the LEGO Group itself is starting to acknowledge this – but that doesn’t mean it should just cobble together any old build to accompany them. Sadly, that’s exactly what has happened here. The speeder bike is pretty cool, but the Tusken hut and Ballista are very underwhelming. This would have felt better value for money if either the parts were used to create a more substantial model – something along the lines of 2018’s 75200 Ahch-To Island Training – or fewer parts were used to create just the speeder and some scenery at a cheaper price.

As it stands, even if 75299 Trouble on Tatooine was valued at around £20 / $20 there would still be a lot of criticism aimed at the builds, but considering this is nearly £30 / $30 it’s very hard to shake the feeling that it’s simply a cash grab.

The Mandalorian is only two seasons in, but already there’s a wealth of material to recreate in bricks: Kuiil and his blurrg pen; the Bounty Hunters’ Guild’s bar; a part of the prison ship; and countless other exciting locales and scenes. Any of those would have been great, so it’s somewhat disappointing that the designers opted for this.

Further to that, the builds are basic and finished very quickly, leaving a feeling of disappointment – and where LEGO sets are concerned, there’s nothing worse than feeling disappointed. Yes, it’s a decidedly cheaper way to get hold of Din Djarin and The Child, and currently it’s the only set to feature Mando in his Beskar armour, but we strongly recommend waiting until 75299 Trouble on Tatooine drops in price, as it’s simply not worth it for what else you get.

Most fans will ignore this advice and pay full price as the character is highly desirable right now, but for casual fans it’s worth spending your hard-earned cash elsewhere, as there are a plethora of sets out there that will offer much better value for money. We have spoken.

Support the work that Brick Fanatics does by picking up your LEGO Star Wars sets – be they 75299 Trouble on Tatooine or any others – by using any one of our affiliate links.