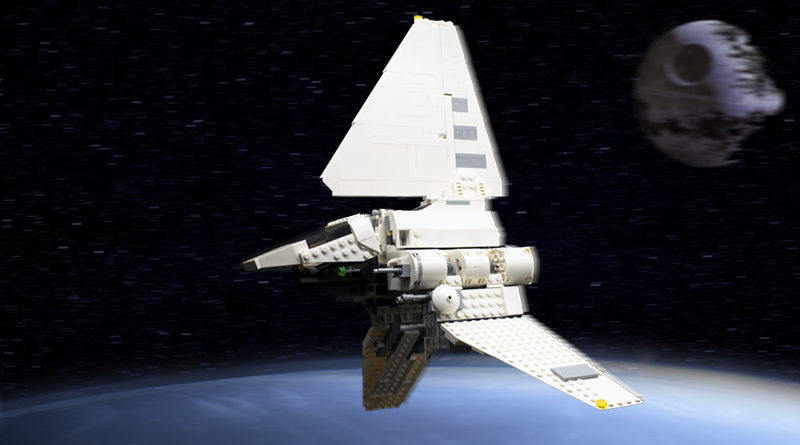 The LEGO Group’s crusade to deliver iconic Star Wars ships at more reasonable prices continues with 75302 Imperial Shuttle – but can this imposing vehicle strike that crucial balance between a reduced budget and an authentic design?

The Lambda class T-4a shuttle is one of the most elegant and iconic ships from the Star Wars universe, but amazingly 75302 Imperial Shuttle is only the fourth minifigure-scale version that’s been produced since 2001. In-keeping with the LEGO Group’s recent wave of Star Wars sets, this iteration has been scaled down to make it more affordable.

The Imperial Shuttle first flew on to screens during the opening scenes of Return of the Jedi, when Darth Vader dramatically entered the second Death Star. Say what you will about the Dark Lord of the Sith, but the man knows how to make an entrance. The shuttle’s iconic trihedral foil design (a fancy way to say three folding wings) and overall sleekness have helped make it one of the more popular ships from the Skywalker Saga.

Despite its obvious appeal, the LEGO Group has previously released just three Imperial Shuttles at minifigure scale, the last being 2015’s 75094 Imperial Shuttle Tydirium. It’s been a long wait to get hold of an updated model, but has it been worth it? In short: yes and no. 75302 Imperial Shuttle isn’t without its faults, but at a reduced price there are just enough positives to make this a viable and tempting purchase.

Inside the fairly sizable box can be found six numbered bags, one instruction manual, and – interestingly for a set this size – no sticker sheet at all. All of the model’s details come from either printed parts or brick-built exterior features.

The build sits somewhere between the aforementioned 75904 Imperial Shuttle Tydirium and 2018’s 75221 Imperial Landing Craft, borrowing and updating certain design aspects from both sets. You’ll begin by assembling the main fuselage, including the interior seating area, which is just large enough to house two minifigures. The seating arrangement gives some idea of how scaled-down this model is compared to earlier versions, which had seating capacity for four in the back and two up front. By contrast, this model’s cockpit can only seat one.

A mix of bricks and plates make up the floor space area, sides and seats, complete with what look like leather arm rests (represented by four 1×2 tan panels). If you’re going to rule the galaxy with an iron fist, you might as well do it in style and comfort.

The mechanism for the set’s main functionality, the folding wings, is also constructed at this early stage – well, ‘mechanism’ is probably a bit of a stretch. The wings are connected to two Technic rotation ball joints on either side. To operate you’ll need to manually fold them up and down, and seeing as both are independent you’ll need to do them one at a time. It works, but does feel a little too simple. A more involved and connected mechanism would have made for a more interesting build, as well as a more entertaining play feature to use.

With the fuselage constructed it’s on to the front nose cone and cockpit. The frame comes together quickly without too much fuss, and despite its size, some of the shaping remains very accurate and captures the iconic look of the on-screen vessel. Larger parts such as 2x2x3 slopes and 8×3 wedges help to create the perfect angles for the front, while at the same time giving the model a more solid look. The windscreen too is just one large black trans-clear panel. The cockpit sub-assembly attaches to the front via two clips, allowing it to hinge up and down.

However, there is one major design flaw that is quite hard to look past. Viewing the model head on, the cockpit looks exactly as it should. The profile, however, just looks bizarre. You’d be forgiven for thinking, “Where’s the rest of the front?” The final model is left with large gaps, exposed Technic pin holes and the appearance of just half a cockpit.

While it can be appreciated that this wave of Star Wars vehicles is intended to offer classic vehicles at a reduced cost and piece count, there is still an expectation of a certain level of accuracy, detail and sophistication – and sadly this area of the model lacks all of the above. What’s worse is none of the official photos on the box art really highlight this – the composition helps disguise it, and in one photo a human hand even blocks the offending area.

It’s very disappointing as the Imperial Shuttle ranks up there with one of the finest ships in the entire saga, and this just feels unfinished. 75221 Imperial Landing Craft was of a similar size and had an enclosed cockpit and nose area, so it’s surprising this model has neither.

Put that negative to one side, and the rest of the build is actually really smart. The mechanism for opening the back fuselage area consists of a small Technic sub-assembly that utilises a flexible Technic double axle connector, which has just enough give to be able to clip securely to the main build, or ease off when the smallest amount of pressure is applied.

The cylindrical engine components, consisting of six sub-assemblies using 2x2x4 half cylinders, look incredibly effective and are really satisfying to assemble and connect. Better yet, each one is constructed slightly differently, so there’s no repetition. The back engines are also very accurate thanks in part to the use of trans-light blue tiles, giving them their familiar blue glow (see the opening shots of Return of the Jedi for reference).

The huge fin that protrudes from the top of the shuttle, giving it its distinctive shaping, is constructed from a number of large sub-assemblies mixing Technic lift arms, bricks and plates. The main bulk of the fin comes from large slopes and 1x1x3 bricks. Once all these sub-assemblies are built they slot together via Technic pins, like a giant jigsaw puzzle. It’s an incredibly satisfying process.

The predominant colour is obviously white, but there’s just enough light grey added in to help break it up while remaining accurate to the on-screen vehicle. It’s not perfect, though: it’s only one stud wide, and so looks a little thin when viewed from the front. It’s a problem that’s been present in past models too, and this would’ve been a great chance to update that. The sides of the fin do have some wonderful detail added through more smart sub-assemblies, though, giving 75302 Imperial Shuttle the sleekest and most stylish finish of any official recreation of this ship to date (bar the UCS version, of course).

The wings are effectively two giant sub-assemblies, too. Angled Technic lift arms slot together with plates and tiles attached to add the necessary shape and detail. Once the wings go on, the unmistakable silhouette of the Imperial Shuttle is complete. It’s worth mentioning that although the mechanism to fold the wings is rudimentary, it is nonetheless firm with a decent amount of friction.

It’s not that they are necessarily bad minifigures – in fact, Darth Vader is excellent – it’s just we’ve seen them before. Jedi Master Luke Skywalker remains unchanged from 2016, and Vader doesn’t even have his new arm prints that were introduced last year. Considering this is the most expensive Star Wars set in this current wave, you would have hoped for the most desirable minifigures too.

Saying that, the included minifigures make sense within the context of the set. Having both Luke and Darth Vader means there are plenty of epic lightsaber duels to be played out, and it’s nice to have an Imperial Pilot to sit in the cockpit.

Okay, look, LEGO Star Wars is getting more expensive. Go back to 2015 and you could have bought the considerably larger 75094 Imperial Shuttle Tydirium, which came with two more minifigures and nearly 300 more pieces, for just a little bit more than the asking price of 75302 Imperial Shuttle. But to quote Obi-Wan Kenobi, that was a more civilised age. (It was also six years ago.)

Based on some of the recent, overpriced Star Wars sets this seems like a bargain. Darth Vader, Luke Skywalker in his Jedi robes, a build lasting more than a couple of hours, and a pretty decent Imperial Shuttle for £70 is a fair price. It’s not in the same price range as 75300 Tie Fighter or 75301 Luke Skywalker’s X-wing Fighter, but all things considered this certainly won’t leave you feeling short-changed.

Overall, 75302 Imperial Shuttle is so nearly a fantastic set. The build is really enjoyable and quite involved. Pockets of the final design look really, really good: in particular, the back engines, the sides of the fuselage, the cylindrical components and the top of the cockpit. However, it’s let down by the frankly awful design of the lower cockpit, and the failure to update the thickness of the top fin feels like a missed opportunity. Throw in the fact there are no exclusive minifigures in the set, and its appeal starts to diminish.

That said, this is the first time in six years that a Lambda T-4a Imperial Shuttle has been released, and for those who missed out on it last time round this is a really good option. It’s priced right, small enough to offer great play value (it’s very swooshable), will give younger builders just enough of a challenge without being too frustrating to construct, and from certain angles looks fairly decent too.

If you can only afford one Star Wars ship from the 2021 line-up, 75301 Luke Skywalker’s X-wing Fighter is probably the one to go for, but if you want to add an equally iconic spaceship to your LEGO Star Wars armada, 75302 Imperial Shuttle is a great option. And hey, if it’s good enough for Vader to fly around in, it’s good enough for us.

Support the work that Brick Fanatics does by picking up your LEGO sets – including 75302 Imperial Shuttle, when it launches – using any one of our affiliate links.