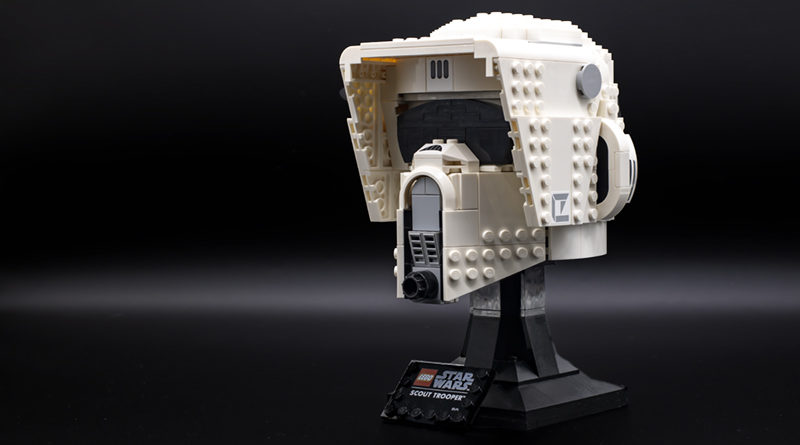 It may be the smallest of the LEGO Star Wars helmets, but will 75305 Scout Trooper Helmet retain the same level of superb detail and accuracy we’ve come to expect from this subtheme? Get ready to dust off the speeder bike: this could be one entertaining ride.

So far, the LEGO Star Wars Helmet Collection has brought us brick-built renditions of heavyweights Darth Vader and Boba Fett’s headgear, as well as the iconic Stormtrooper and impressively-constructed Tie Fighter Pilot’s buckets. Now, it’s time to turn our attention to arguably the coolest of all the Empire’s foot soldiers.

Thanks to their stylish black and white suits and awesome speeder bikes (hands up who wanted one the moment they raced on to screens in Return of the Jedi), Scout Troopers are among the most popular units in the entire Imperial army – and thanks to recent appearances in The Mandalorian, they are now more in the public eye than ever before.

Will 75305 Scout Trooper Helmet recreate their distinctive style well enough to do their on-screen design justice, or will the age-old debate of stickers versus printed parts threaten to undermine the overall appeal of the set as a whole?

Once again, 75305 Scout Trooper Helmet comes in stylish black packaging and – like 75304 Darth Vader Helmet (review) – the finished model on the box is surrounded by a faint red glow. Unfortunately – and again like 75304 – the set also comes with a number of stickers. These models are predominantly aimed at adults and the price feels fair as it is, so the extra cost of printed parts would probably not be enough to put off the target audience.

In fact, entirely printed pieces would probably make this model (and similar sets) even more appealing, as it would have an air of exclusivity to it. It is something the LEGO Group needs to address in future sets as it would really enhance the overall appeal. It’s a small negative, but really one that doesn’t need to be there at all.

Every other helmet in this range starts the same, building up a small display base for the bulk of the model. 75305 Scout Trooper Helmet takes a departure from that norm, and instead construction begins on the helmet itself. For fans used to these sets it’s a welcome change, while for those new to the theme it’s exciting to get stuck into the distinctive helmet right from the start.

The helmet is assembled in the usual fashion, around a central core surrounded by bricks with studs on the side. The distinctive visor is built using 1×2 and 1×4 curved slopes, which gives it sleek and accurate shaping, and then the first of the stickers are introduced. Sitting just above the visor, the matte sticker really stands out against the LEGO bricks on either side, especially as the colours don’t match.

The back and sides require a total of 12 stickers to be placed around 1×4 double sloped curves. The details they add are essential, and so care is needed in order to have them line up in a precise way. Again, the colours don’t quite match up, but at least they add some important and necessary details. The stickers wouldn’t be so much of a problem if a printed plaque wasn’t also included. The plaque adds a layer of style and exclusivity to the finished model, and its inclusion makes you question why there couldn’t have been more printed parts too.

It is a shame to be critical because there are some really nice brick-built areas of the model, both different to what has come before and quite enjoyable to construct. The use of 2×2 triangular tiles used to create smooth angles on the visor is really smart and looks very effective.

The symmetrical angled sides of the front of the face – both sub-assemblies connected to the main bust via clips – look excellent, capturing the sleek look of the Scout Trooper’s instantly-recognisable helmet. A white wheel arch above the nose and various tiles, grilles and a black Technic driving ring extension, representing the helmet’s air supply nodule, completes the detail on the front.

The two sides to the helmet are also made from two large sub-assemblies, using a series of plates, wedges and the relatively new white 2×6 tile (introduced in 2021) to add interesting shaping and textures. The sides are also slightly asymmetrical – one side features an Imperial insignia (once again a sticker) but for the majority the techniques to build the two are the same, with neither being big enough to feel repetitive.

The final model definitely captures the unmistakable look of the Scout Trooper’s helmet. The inclusion of stickers is really only a negative when considering that this is targeted at an adult market and presented as a collector’s piece. While they do slightly cheapen the look, it certainly isn’t enough to truly detract from what is otherwise an authentic, accurate and aesthetically-pleasing final model.

No minifigures are included with the LEGO Star Wars Helmet Collection sets, but much like the others in the range, 75305 Scout Trooper Helmet is a wonderfully faithful recreation of the Scout Trooper’s bust, displaying a decent amount of detail while retaining a strong LEGO aesthetic.

75305 Scout Trooper Helmet is an enjoyable building experience, ending with a decent display piece (stickers aside). It is the smallest helmet in the subtheme and the price reflects this, as it’s also the cheapest. The other Star Wars helmets are considered to be good value for money, so really we have to say that this is a fantastic price for everything offered.

75305 Scout Trooper Helmet may be the smallest of all the helmets released so far, but it really doesn’t feel like you are being shortchanged. The build experience is refreshing and familiar at the same time, and the final model looks excellent, capturing the biker scout’s coolness incredibly well.

When placed next to the other helmets it really stands its ground, and if displayed solo will no doubt capture the attention of those who see it. It’s a set that would make a great introduction to the series – or indeed to the world of LEGO Star Wars – as it won’t break the bank, will hold enough interest from start to finish and the final model will surely leave you wanting more.

Support the work that Brick Fanatics does by purchasing your copy of 75305 Scout Trooper Helmet from Jadlam Toys or LEGO.com using our affiliate links.

How long does it take to build LEGO Star Wars 75305 Scout Trooper Helmet?

75305 Scout Trooper Helmet will take just under two hours to construct. Experienced builders may be able to complete the build even quicker.

How many pieces are in LEGO Star Wars 75305 Scout Trooper Helmet?

75305 Scout Trooper Helmet has the fewest parts of any of the sets in the LEGO Star Wars Helmet Collection, ringing in at just 471 pieces.

75305 Scout Trooper Helmet is the smallest of the LEGO Star Wars helmets – but only just, measuring 18cm in height, 11cm wide and 12cm deep.

How much does LEGO Star Wars 75305 Scout Trooper Helmet cost?