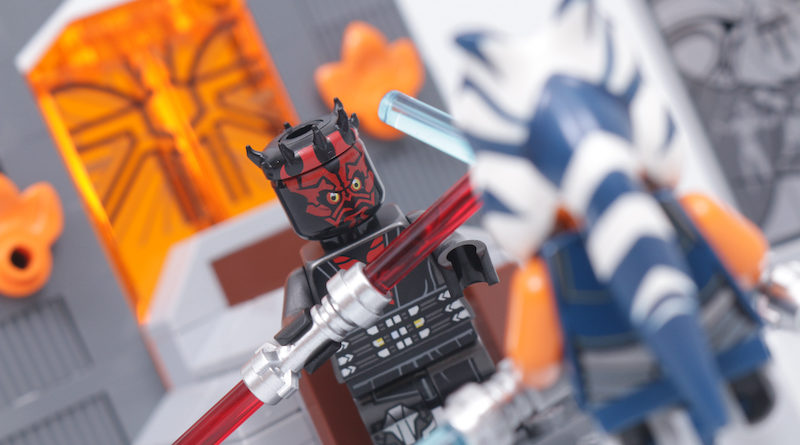 Hot on the heels of other LEGO Star Wars battles-at-a-budget, 75310 Duel on Mandalore pits two leading Clone Wars characters against one another – what more could you ask for?

A little bit more LEGO, perhaps. However, this is LEGO Star Wars, the theme that if you are a fan of, you will make plenty more allowances for than any other theme. And where some may be pointing to other sets around the £15-20 mark on LEGO shelves and suggesting there’s so much more actual LEGO to be had than there is in 75310 Duel on Mandalore, LEGO Star Wars fans know different.

Taking a key moment in a recent Clone Wars storyline, 75310 Duel on Mandalore is a representation of story and character. It’s a LEGO set that demonstrates both the at-times-questionable value of LEGO Star Wars and also the continued ability of the theme to have most of us completely forgive that.

Pitting Darth Maul (as he is referred to on the box art, though by Clone Wars Season 7 he was known merely as Maul) against Ahsoka Tano, 75310 Duel on Mandalore represents the culmination of two of the Clone Wars television series’ leading characters’ respective stories, as they come face to face on Mandalore. Played out in the latter episodes of Season 7 of the show (released on Disney+ in mid-2020), it is a moment of brilliant story, character and action, and the perfect subject for a duel-themed LEGO set.

75310 Duel on Mandalore takes direction from previous recent LEGO Star Wars duel sets at this same price point that have also had two characters face off in a classic location, such as 75236 Duel on Starkiller Base and 75269 Duel on Mustafar. As with those sets, primary focus is on the minifigures included, and both Ahsoka and Maul do not disappoint in 75310.

Yes, it is the same Ahsoka design that appeared in last year’s 75283 Armored Assualt Tank (AAT), so it does relegate that set’s relevance, as now this fantastically-designed and long-awaited version of the female former Jedi apprentice is available in a set at half the price. Her minifigure design does not disappoint, capturing the right level of detail and colour to her outfit as seen in The Clone Wars Season 7.

Meanwhile, Maul’s minifigure is a brand new and exclusive design for 75310 Duel on Mandalore, depicting the open-chested robes of the former Sith, that large belt across his midriff and those shiny robotic legs in all their glory. It is slightly reminiscent of his minifigure design that was included as an exclusive giveaway in the recent LEGO Star Wars Character Encylopedia, but a quick side-by-side will demonstrate several differences reflective of the different Star Wars eras each design of the character comes from.

75310 Duel on Mandalore does have some LEGO bricks too, before we forget – and they are more than just side builds, as we get Maul’s Mandalorian throne and also the Mandalorian vault that he is then encased in after his defeat to Ahsoka and subsequent capture. Both are smartly recreated in LEGO form and cleverly represent the high and low points for Maul in his Season 7 story.

Both builds also serve to help establish the location that Ahsoka and Maul duel in, but in comparison to previous duel-based sets at this same budget, far less effectively. 75236 Duel on Starkiller Base and 75269 Duel on Mustafar both placed their characters well and truly in the thick of the action and the locations they fought in. It’s not to criticise 75310 Duel on Mandalore too much for not doing the same, only to acknowledge that as a set it has taken a slightly different approach on what to include, and that it will feel like a different LEGO experience as a result.

Whatever side of the fence you may fall on as to whether that experience is better or worse, one thing that will likely unify everyone will be the frustration that the front door to the Mandalorian vault is indeed a sticker. Good luck with applying that one – it is beautifully designed and perfectly captures the ornate artwork of the source material, but what pressure to align it correctly…

75310 Duel on Mandalore is all about the characters included and the designs for both Maul and Ahsoka Tano do not disappoint. Ahsoka may be the same as her appearance in 2020’s 75283 Armored Assualt Tank (AAT), but a year on her design remains on point. If there was one room for improvement, perhaps it could have been in producing a new mould for her Togruta headtails, as they weren’t really as long as her minifigure design depicts.

Maul is perfectly designed in almost every detail and represents a more-than-credible new edition for anyone’s LEGO Star Wars collection, even if it already includes more than a few previous versions of the former Sith. The only area to improve would be a better colour-match between the red printing on his face and chest – one is slightly brighter than the other.

75310 Duel on Mandalore includes a brand new and exclusive Darth Maul minifigure and an expertly-designed Ahsoka Tano minifigure previously only available in a set priced twice as much. Combined with a couple of fun and story-relevant builds, there’s little to criticise the price of this set – at least in the context of other LEGO Star Wars products.

The summer 2021 wave of LEGO Star Wars sets represents a return to true form for the theme, and while many of the larger sets will likely pull focus and place a little more pressure on your wallet, do not overlook what 75310 Duel on Mandalore delivers. There’s enough story and character captured in just a handful of bricks here to make this a more-than-worthy addition to any LEGO Star Wars collection.

How long does it take to build LEGO Star Wars 75310 Duel on Mandalore?

With only 147 pieces included, 75310 Duel on Mandalore can be put together in less than half an hour. But take your time applying those stickers…

How many pieces are in LEGO Star Wars 75310 Duel on Mandalore?

There are only 147 pieces in 75310 Duel on Mandalore, making it one of the smallest LEGO Star Wars sets proper to be released in a long while, discounting polybags, constraction sets and battle packs.

How big is LEGO Star Wars 75310 Duel on Mandalore?

75310 Duel on Mandalore is one of the smaller LEGO Star Wars sets of recent waves of releases. The largest part to the set is the Mandalorian throne, which measures over 8cm tall, 8cm wide and 7cm deep.

How much does LEGO Star Wars 75310 Duel on Mandalore cost?