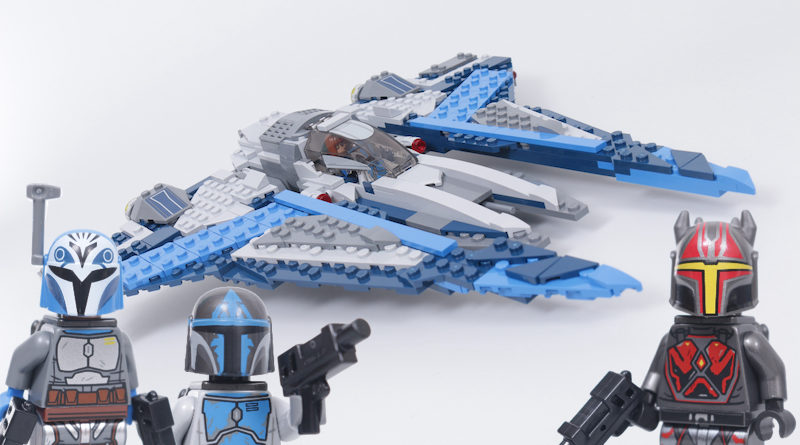 My, that’s a small box. Yes, it is, but this is no 10282 Adidas Originals Superstar box appreciation situation – for the beauty of the art across the front and back of 75316 Mandalorian Starfighter’s box, we’re not here to pass too much immediate comment on it (more on that later), even if at £50, yes it does feel a little small, and a little light.

What matters here is what’s inside the box, for it has been a long time coming. Minifigures for Bo-Katan and Gar Saxon have long been in demand, particularly for the former, who quite remarkably debuts as a LEGO minifigure here a full nine-and-a-half years after her first appearance in the Clone Wars television series.

For wider LEGO Star Wars collectors and Clone Wars fans too, 75316 Mandalorian Starfighter is also a second opportunity to build and own a model of the Mandalorian Starfighter (also known as a Gauntlet), which if you are anything like Brick Fanatics, you missed out on first time around when 9525 Pre Vizsla’s Mandalorian Fighter was available in 2012 and haven’t dared pick up on the highly-expensive aftermarket since.

In a summer wave of some quite stunning LEGO Star Wars sets, 75316 Mandalorian Starfighter carries the most anticipation – does it deliver?

To answer the question above: yes it does, for the most part. While 75316 Mandalorian Starfighter is not perfect, it is a more-than-credible and interesting addition to the LEGO Star Wars roster, primarily for how unique a ship it is and how that translates into LEGO form.

It may indeed come in a little smaller than you’d have initially hoped (it measures approximately five studs shorter than 2012’s 9525 and six studs slimmer), but in detail and design, 75316 Mandalorian Starfighter captures all the intrigue and fun around a genuinely one-of-a-kind ship from that galaxy far, far away that is otherwise packed with all sorts of ships.

Beyond the curiosities around having a larger piece count yet coming in as a slightly smaller model, comparisons with its predecessor from nine years ago are more or less redundant for 75316 Mandalorian Starfighter, given the advances in design, technique, parts availability and colour choices in the period since, and how all those things contribute here.

75316 expertly recreates the ornate shaping of the Mandalorian fighter, including many of the twists and turns in angle on the wings, as well as the pointed features that shape the cylindrical central fuselage. Built mainly out of plates and tiles, it makes for a relatively thin LEGO model, best compared to any of the recent LEGO X-wings, but one that is impressively sturdy.

That’s important considering the significant ranges in motion that the set needs to skilfully replicate – those being the rotating central body and the upward-folding wings. In flight mode it gives the starfighter the same manoeuvrability as demonstrated in the Clone Wars, while in landing mode the wings fold up for some impressive height.

However… there’s something wrong with the model in landing mode – it doesn’t balance quite as you would expect. As per its appearances in both the Clone Wars and the Mandalorian, the Gauntlet is meant to sit upright on the back of its folded-up wings and the back of the fuselage, with the long front to the centre of the ship pointing out forwards either with a central support stand, or no contact at all on the floor (at least if the brief glimpse in the Mandalorian is anything to go by). In this position, the ship is meant to sit perfectly upright.

Somewhat puzzlingly, there is no support stand and, due to gravity, the model leans forward, wings and all, and that is however you try to stand it. It’s so unusual to see that we triple checked we hadn’t made a mistake in building the set, but if you look closely at some of the official ‘lifestyle’ images of the set (which are used on the LEGO.com listing too), it’s an issue that is even on show there, just hidden in plain sight through some very cleverly angled photography. And in the official box art? It’s cut out so you can’t tell. Cheeky, LEGO, very cheeky.

There’s a lot to love about the design of the ship in 75316 Mandalorian Starfighter, but the lack of a support stand (accurate or not to the actual on-screen ship) does mean half the experience around the final model is somewhat tempered. The frustration – and why it’s relatively easy to also forgive – is for how easy a fix it really is. A few plates added to the inverted wedges underneath level the fuselage upright just fine.

75316 Mandalorian Starfighter remains a beautiful build, just one you’ll maybe need a few extra LEGO pieces adding to, so as to create a worthy display mode for.

75316 Mandalorian Starfighter is a credible LEGO set for the model that it builds, but a lot of attention will naturally fall on the trio of minifigures included, and for good measure.

There’s only one character to begin with here and it’s Bo-Katan. Almost a full decade after her first appearance in The Clone Wars, finally she is here in full LEGO minifigure glory, and it has been a wait well worth it. In every aspect, this is the minifigure we wanted, hoped for and have in front of us.

Most importantly, the complex design to her unique helmet is wonderfully recreated in print, whilst her dual-printed minifigure head includes her headband. The attention to detail continues down through her torso and legs to tie everything together for a highly-desirable addition to any LEGO Star Wars minifigure collection.

Bo-Katan is joined by a generic Mandalorian Loyalist who, for many, will initially be overlooked in the line-up – but for the details that are included in it, may prove just as collectible longer term. Those begin with the printing on the helmet but continue through the torso and legs that include a scratch effect of blue paint, to give the unnamed character an appropriately battle-worn appearance.

It is worth mentioning too that both these minifigures sit just as well in Clone Wars and Mandalorian line-ups, and that is testament to intelligent and selective graphic design by the LEGO Star Wars team.

The third minifigure introduces another antagonist into the collection, in the form of Maul loyalist and future Imperial Super Commando Gar Saxon, here in his red and black Mandalorian armour, complete with a uniquely-moulded helmet that includes those horns. Just as with Bo-Katan’s design, Gar Saxon’s is full of ornate printing and every possible detail you could notice about the appearance. His minifigure face is also a perfect expression of character too.

If ever there was a flawless trio of minifigures to come in a LEGO Star Wars set, it is these three.

Picking up 544 pieces for £49.99 / $59.99 / €59.99 is fair value in any LEGO set. That those 544 pieces build 75316 Mandalorian Starfighter and include three of the best-designed LEGO Star Wars minifigures of recent waves presents great value. Yes, the model doesn’t stand up on display properly, but for everything else that is included for the price, expect a hard time finding it in stock in its opening months of release.

The LEGO Group has indeed slightly misled us in the official photography of 75316 Mandalorian Starfighter, suggesting that it could do something that actually it couldn’t do, in spite of that thing – standing up straight – seeming like a basic requirement.

That being said, here we are singing the set’s praises, overlooking that fundamental issue as nothing more than a solvable problem with a few LEGO pieces, simply for how perfectly the model and three minifigures included otherwise fulfil more than one long-awaited desire for many a LEGO Star Wars fan.

Our first ever Bo-Katan and Gar Saxon minifigures and a first Mandalorian Gauntlet in almost a decade all come in this one set, after such a long wait. If the model could have stood up by itself without additional building, we would have been talking about one of the best LEGO Star Wars sets to have come out in recent years. As it is, it falls just below that status, which makes it still more than worthy of pride of place in any collection. You’ll just need to add your own support stand.

Support the work that Brick Fanatics does by building your LEGO Star Wars collection through one of our affiliate links.

How long does it take to build LEGO Star Wars 75316 Mandalorian Starfighter?

75316 Mandalorian Starfighter takes a little under an hour to complete, but pay attention to those dark blue elements in the wings, as they aren’t to be rushed through.

How many pieces are in LEGO Star Wars 75316 Mandalorian Starfighter?

There are 544 pieces in 75316 Mandalorian Starfighter, making it 151 pieces larger than 2012’s 9525 Pre Vizsla’s Mandalorian Fighter, which was the last version of this ship released.

How much does LEGO Star Wars 75316 Mandalorian Starfighter cost?

75316 Mandalorian Starfighter is priced at £49.99 in the UK, $59.99 in the US and from €59.99 in the EU, representing comparative good value for the piece count and the fact it includes three exclusive minifigures, including first-ever appearances for Bo-Katan and Gar Saxon.