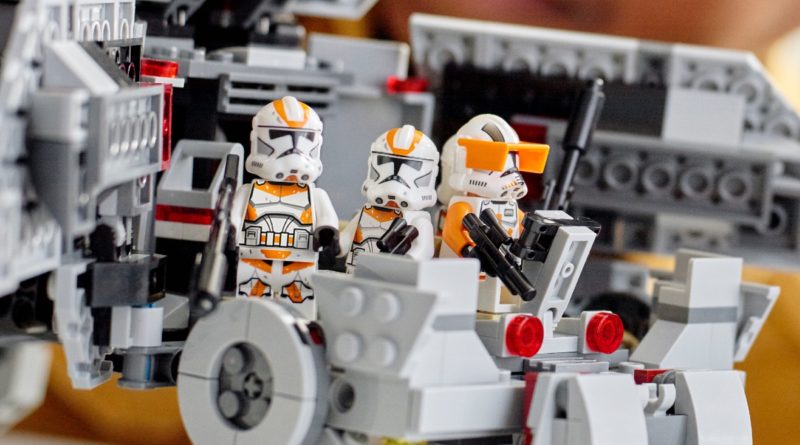 Despite the fact they’re basically designed for army building, Clone Troopers have been pretty difficult to come by in vast quantities over the years – at least by picking up a single LEGO set. We’ve had battle packs aplenty to fill in the gaps, but their often odd makeup has occasionally made it tricky to amass legions of generic troops.

All that is to say that 75337 AT-TE Walker’s total of five Clone Troopers (even if one of those is a commander) is immediately refreshing, going one step beyond even more expensive ‘battle packs’ like 75280 501st Legion Clone Troopers. In fact – believe it or not – the Revenge of the Sith set actually boasts the second-highest number of Clone Troopers in a single set… ever.

Its Republic line-up consists of the long-awaited Commander Cody, a Clone Gunner, and three 212th Legion Clone Troopers. While you’re probably not going to be stocking up on AT-TEs just to build your 212th army (remember, it does retail for £119.99 / $139.99 / €139.99), getting such a formidable force right out of the gate is still very welcome.

Compare 75337 AT-TE Walker’s minifigure selection with the last vehicle of its type, for instance, in 2013’s 75019 AT-TE. That set includes two Jedi – Mace Windu and Coleman Trebor – and two rare Geonosian Battle Droids, sure, but you’re only getting a single yellow-tinted Clone Trooper Commander in the box. That’s pretty poor for a set anchored around the Republic Army.

75337 AT-TE Walker may not include any Jedi, but it does pack in three regular Battle Droids – astonishingly, the most in any single set since 2015’s 75086 Battle Droid Troop Carrier – and a Clone Trooper line-up that puts almost every other LEGO Star Wars Republic vehicle to shame.

Almost, but not totally – because the record for the most troops in a single box still belongs to a set that’s now more than 13 years old. We’re talking about 10195 Republic Dropship with AT-OT Walker, an incredibly ambitious 2009 set that combined two massive vehicles with a whopping eight Clone Troopers (six regular, and two pilots).

The new set’s line-up also means there’s practically no need for a standalone 212th Legion Clone Troopers battle pack in the near future – clearing the way for the LEGO Group to focus on other factions elsewhere, like the 187th Legion in 75342 Republic Fighter Tank – and hopefully ensures that standard 212th troops won’t be exorbitantly expensive on the aftermarket.

It all adds up to a consumer-friendly way to go about including minifigures in LEGO Star Wars sets, so fingers crossed it’s the start of a new precedent for the long-running theme – and one that could one day see 10195 Republic Dropship with AT-OT Walker toppled from its instant-army-building throne.

You’ll be able to pick up 75337 AT-TE Walker (and its five Clone Troopers!) from August 1 at LEGO.com and in LEGO Stores.