To start building anticipation for the launch of Solo: A Star Wars Story, the movie’s titular character has been released a LEGO BrickHeadz set

Solo: A Star Wars Story is less than two months away, something that has not gone unnoticed by the LEGO Group, with two BrickHeadz now available based on the most iconic of the main characters. 41608 Han Solo is based on Alden Ehrenreich’s younger portrayal of the famous smuggler, which is a nice tie-in to the new film but may disappoint fans of the original trilogy. So does 41608 have it where it counts? 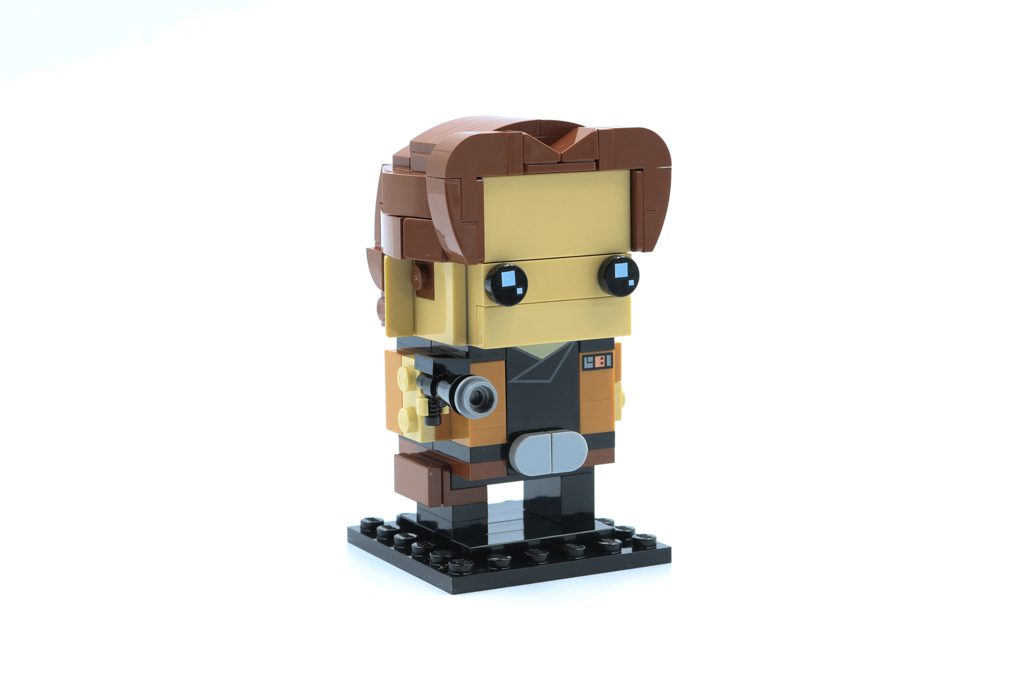 The build follows the same basic approach as almost every BrickHeadz set. It is nothing complicated and can be completed quickly. Although on the box art 41608 Han Solo looks quite plain, in reality there’s a good level of detail that will not disappoint fans. From the clever building techniques used for the hair and that iconic parting, to the simple yet effective use of parts for Han’s holster (even if it is completely superficial), it’s all fun to put together. Once built, the character is instantly recognisable as the charming scoundrel.

With only a trailer for comparison, 41608 Han Solo seems to be accurate to the source material. There are elements that could be improved like the colour of the jacket, which should be a darker brown. This is only a minor flaw, as the style of it seems to be about right.

One consistently good thing about this range is that there are no stickers – the details on the shirt and jacket are achieved through printed elements. This must be welcome to all fans who hate stickers, and will mean that this set will still look as fine as it does today in ten years’ time, when the production issues behind Solo: A Star Wars Story have long been forgotten.

Overall, this is a pleasing set, even if it does not fulfill the expectations of die-hard classic trilogy fans who would prefer a classic Harrison Ford Han Solo. As a first taste from the movie though, this is just enough to whet the appetites of fans while they wait for the main course on April 20.

41608 Han Solo is available now at shop.LEGO.com. You can help support Brick Fanatics’ work by using our affiliate links.