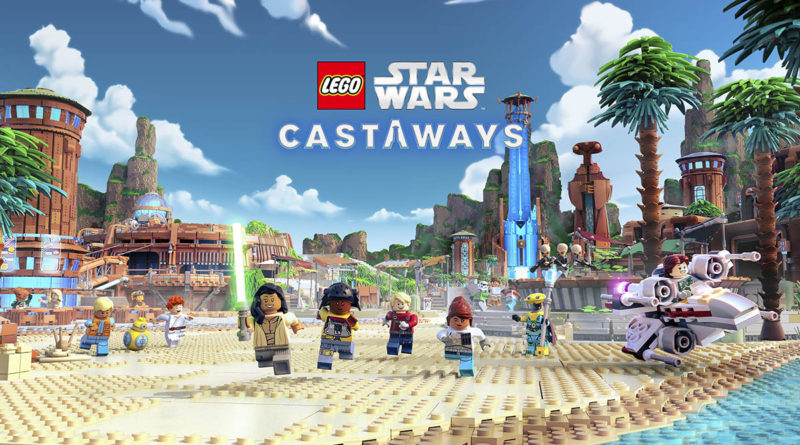 LEGO Star Wars: Castaways is the latest Apple Arcade exclusive, but is it a worthy addition to a gaming galaxy far, far away?

There have been many LEGO Star Wars video games released over the years, most of them created by TT Games. In fact, they’ve built an entire company almost primarily around the success of their LEGO titles, so much so that other developers have rarely had a look-in.

With fans impatiently waiting for any news on TT Games’ long-delayed LEGO Star Wars: The Skywalker Saga, they’re having to look to other titles to satisfy their LEGO gaming needs. Following last year’s release of LEGO Star Wars Battles, Apple Arcade recently revealed LEGO Star Wars: Castaways, an all-new adventure from Gameloft, the developer behind LEGO Legacy: Heroes Unboxed. But can this new action-adventure game from a subscription-based service match the standard of LEGO Star Wars games that have come before?

LEGO Star Wars: Castaways boasts an all-new post-The Rise of Skywalker storyline set on a mysterious secret planet. When the game begins, your character has crash-landed on this strange world and discovers they’re one of many characters stuck on an island until you can repair your ship. By taking on quests from NPCs (non-player characters) and undertaking missions, players are able to level up their character, earn valuable rewards and ultimately solve a mysterious threat to all life on the planet.

LEGO Star Wars: Castaways is free to play for those who have an Apple Arcade subscription, which costs £4.99 / $4.99 / €4.99 per month. Alternatively, new players can get a one-month free trial to Apple Arcade or LEGO VIPs can grab up to three months of access in exchange for 300 points. However, do note that the paid subscription will kick in at the end of the promotional period, so be sure to cancel before that time if you don’t want to continue.

The game is currently available on iPhone, iPad, Mac and Apple TV and can be played via touchscreen on some devices or by connecting an Xbox or PlayStation controller via Bluetooth. We primarily played LEGO Star Wars: Castaways on Apple TV using an Xbox One controller, which was a much more enjoyable experience than struggling with the less-than-accurate touchscreen method.

In the main island hub, players explore the brick-based world around them, interacting with NPCs for missions, information and rewards, before heading into one of the Holosimulation buildings. Here it’s possible to undertake a number of missions to destroy purple, glowing Corruption Nodes, collect valuable Databits, battle enemies and clear levels for bonuses. There are a mix of ground and ship-based levels from the classic Star Wars trilogy, but no content as yet from the prequels or sequels (despite this being set after Episode IX).

Progression through the game opens up more options, such as multiplayer battles, vehicle races and even dance parties. There are daily, weekly and story-based missions to tackle, each of which rewards players with more Databits to spend, while moving the plot forward and revealing more about the island world and its many strange inhabitants.

Your character initially has very limited moves, but completing missions soon gives access to Jedi abilities, lightsabers and a whole range of weapons and vehicles to choose from. Likewise, the more Databits you collect, the more character customisation options you’ll have, with a wide range of clothing, minifigure parts and other goodies available from the island’s marketplace stalls and friendly vendors.

If gaming solo isn’t to your liking, there are a number of multiplayer options to try out either by teaming up with other castaways to defeat enemies or by competing against each other in the Hippodrome to grab Battle Marks. Simply accept any of the player invitations that regularly pop up to join others and complete tasks or create your own groups and see who’s around to play with.

The game’s frame rate is smooth and character animations are fun, almost fooling you into thinking this is a LEGO Star Wars video game crafted by TT Games themselves. Likewise, sound effects and the saga’s iconic theme music are present and correct, while characters ‘speak’ via general mumbling (as in earlier LEGO video games), as opposed to full voice acting.

While it certainly sounds as if LEGO Star Wars: Castaways has a lot going for it, the game is ultimately a frustrating experience, marred by a seemingly unending series of fetch quests and repetitive Holosimulation levels. Unlike the fun and sense of wonder that comes from playing any TT Games LEGO title, here there are massive levels with not much happening in them, the grind of repeating tasks over again and an ever-present sense of there being no end in sight.

Even the simple joy of smashing items in a LEGO video game and being rewarded with shiny studs is instead replaced here with ghostly Databits that lack that same tangible feeling of having actually been collected. Also, annoyingly, the size of each level combined with the fixed isometric viewing angle means that enemies can blast away at you long before you can even see them onscreen.

In addition, it’s hard to dodge the blast radius of a thermal detonator, even with nimble reflexes, often resulting in yet another inevitable respawn. While the game has had a few minor updates so far, we had plenty of issues with save files not working across different devices, frequent glitches and the game crashing far too often to make it much fun.

While some younger gamers coming to the franchise for the first time might be able to wring a few hours of entertainment out of LEGO Star Wars: Castaways, it’s unlikely seasoned gamers will want to give it a second glance. Our advice is to wait for LEGO Star Wars: The Skywalker Saga to finally be released in Spring 2022 and then be reminded what a genuine LEGO Star Wars video game should really be.