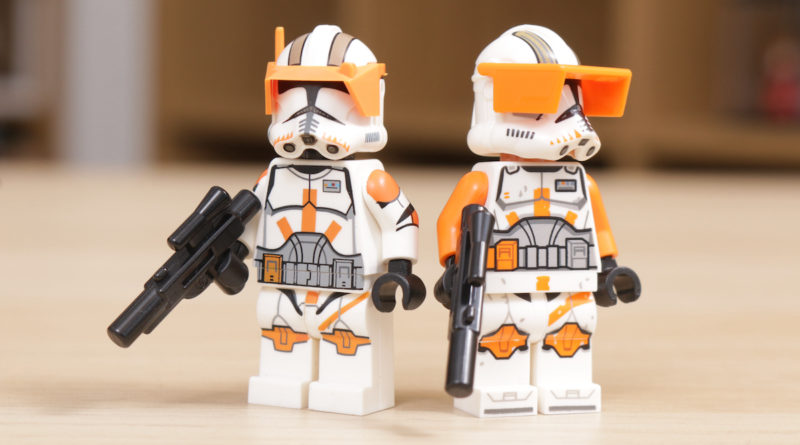 We’re finally getting a LEGO Star Wars Phase II Commander Cody minifigure in this summer’s 75337 AT-TE Walker, and it’s great – but it could have looked even better.

It’s taken just over 17 years for the LEGO Group to bring us a Phase II version of Commander Cody, the orange-tinted Clone Trooper who first showed up in 2005’s Star Wars: Revenge of the Sith. In the time between, prequel-trilogy fans were left with a significant gap in their collections – and where there’s a gap in the market, there’s a third-party customiser to fill it.

Take Clone Army Customs, for instance, which for a good while has produced a striking and inimitable version of Commander Cody in his Phase II armour – to the point that even the LEGO Group arguably hasn’t managed to best it in 75337 AT-TE Walker, which launches August 1 in the UK and Europe and at a currently-unspecified date in the US.

There’s nothing inherently wrong with the official version of Commander Cody, but he’s perhaps more toyetic and less accurate than you’d expect – especially given how on point the rest of 75337 AT-TE Walker is, in both its vehicle design and its other minifigures. That’s noticeable nowhere more so than in the official version’s awkwardly-large visor, which reuses a piece first introduced back in 2008.

The visor looked just okay then, reflective of the cartoonish designs that defined those early Clone Wars sets, but by 2022 the cracks are beginning to show. Compare LEGO Star Wars’ official Commander Cody minifigure to any still from Revenge of the Sith, and it’s clear that his visor is just too big (and also lacks the smaller rangefinder that the Clone Commander sports).

Place it next to Clone Army Customs’ less prominent design, and the difference is striking. While the LEGO Group has clearly engineered its new helmet (with side holes) to be a universal fit for all future Clone Troopers – who can then adopt rangefinders, visors and so on – that one-size-fits-all approach has come at the detriment of Cody, who really deserved his own dedicated helmet mould with integrated visor and rangefinder.

That’s to say nothing of the printing, either: official Cody gets leg printing, which is much appreciated – albeit standard for Clone Troopers in 2022 – but his completely-orange arms are not what you’d call authentic. By contrast, Clone Army Customs’ minifigure features prints across both arms to depict Cody’s orange shoulder and elbow armour, leaving the rest of his limbs a more accurate white.

A perhaps more puzzling choice in the official Commander Cody minifigure, highlighted and magnified by the custom version, is the LEGO Group’s tendency to print its Clone Troopers’ belts above waist level. Clone Army Customs prints Cody’s belt on to his hips, whereas the official minifigure’s belt sits at the bottom of the torso – arguably too high up.

The Clone Army Customs version of Commander Cody pictured here actually uses an older torso and legs, but the latest (and improved) version of the custom minifigure is available now – complete with additional markings, shoulder printing and wraparound boot printing. If you’d just like to add the helmet to your own Cody minifigure, you can buy that separately too, with worldwide shipping.

LEGO Star Wars 75337 AT-TE Walker launches August in the UK and Europe, but ‘delivery challenges’ mean its launch is delayed in the US. While you’re waiting for it to arrive, check out our detailed review of the Revenge of the Sith set.