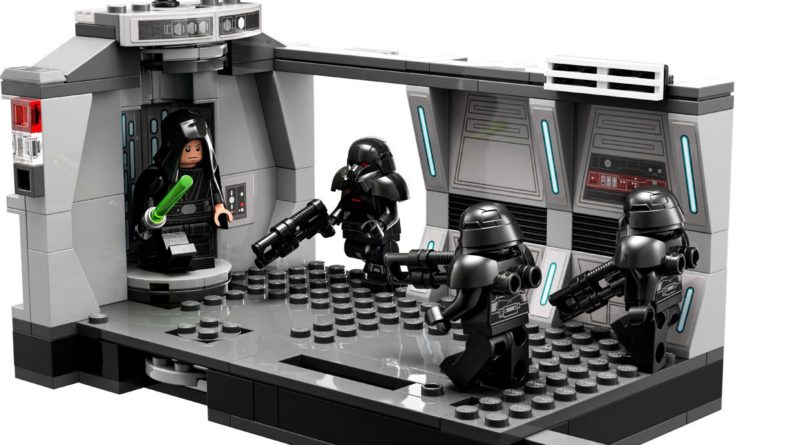 The rumoured LEGO 75324 Dark Trooper Attack set has been revealed at an online retailer, with images confirming what minifigures are included.

Online retailer JB Spielwaren has revealed another upcoming set due in March, this time for LEGO Star Wars as the first images for 75324 Dark Trooper Attack have been unveiled. The latest Mandalorian model references a moment from the final episode of season two, so spoilers will follow.

The set includes a Luke Skywalker minifigure wearing a hooded cloak as he emerges from the turbolift towards the trio of recent Dark Trooper minifigures, as the decorated hallway creates a diorama for the scene that is filled with action features.

At least three moving parts can be seen in the provided pictures, including sliding and spinning sections of the floor as well as a rotating turbolift to recreate the Jedi Knight’s grand entrance.

According to the retailer, 166 pieces are included in the model for €29.99, as well as the four minifigures. The listing states that it will release on March 1, along with several other recently revealed sets.

The LEGO Star Wars build has been heavily rumoured but is now confirmed to be launching soon, though it has not yet been added to the official online store.

Support the work that Brick Fanatics does by purchasing your LEGO Star Wars sets using any one of our affiliate links.