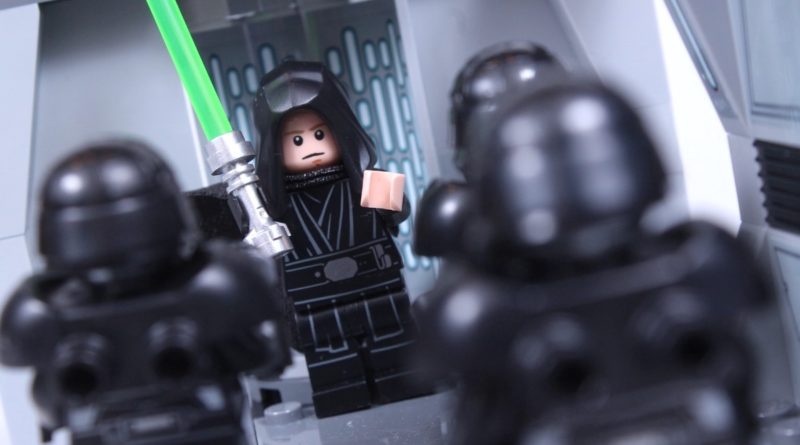 Can a LEGO set be everything to all people, all at the same time? No, of course not, that would be ridiculous. But 75324 Dark Trooper Attack gives it a really good go anyway, offering something for army builders, minifigure collectors, kids, adults and custom builders alike.

And even if it doesn’t quite hit the nail on the head in all those aspects, the fact that it manages to deliver on all of them at least partway deserves applause. What we’re saying is, if you like LEGO, Star Wars and The Mandalorian, there’s probably something in 75324 Dark Trooper Attack for you…

Beyond just aiming for that absurdly broad appeal, 75324 Dark Trooper Attack is a genuinely curious set in the current portfolio. First, it’s another representation of (part of) an existing set at a wildly different scale, blowing up the interior of 75315 Imperial Light Cruiser to something that’s better fitting of minifigures.

Second, it’s got all the vibes of a battle pack without actually, technically, being a battle pack – at least in name. But then 75280 501st Legion Clone Troopers doesn’t say ‘battle pack’ on the box, and it definitely is. Still, the minifigure selection suggests this isn’t intended to be an army builder – more on that later – while the build really goes above and beyond anything we’ve seen from a typical battle pack.

That there are only 166 pieces here might seem pretty mystifying by the time you pop the final brick down, because the finished model is surprisingly substantial. For comparison’s sake, 75226 Inferno Squad Battle Pack contains 118 pieces, which build into… a whole lot of nothing. Even 75262 Imperial Dropship – 20th Anniversary Edition includes 125 pieces, just 31 fewer than 75324 Dark Trooper Attack, and the difference in the builds is night and day.

The LEGO Star Wars theme doesn’t always get location-based sets right – particularly at this price point – with builds often feeling disjointed or sparse. But this slice of Imperial corridor ticks all the boxes, offering a wide, brick-built footprint while still keeping everything contained and cohesive.

The much-touted play features are really neither here nor there: yes, the elevator spins around, but Luke can’t hold his lightsaber while it does so; the spinning area of the floor is tricky to operate smoothly with your finger; and the sliding floor to simulate one of the troopers being Force-pushed away feels as limited as it does fun.

For those of us just popping 75324 Dark Trooper Attack on display, though, this really does look the part, and – if you’re happy to dispense with some of those play features – could easily be improved and embiggened by combining multiple copies. The overreliance on stickers does grate a bit, but it’s difficult to see how some of the details could have been recreated at this scale (and, crucially, price point) in bricks.

One option might have been going less forensic with the detail and instead focusing on less realistic, but more charming, brick-built greebling across the walls. Would that have inflated the price tag even further? Presumably, although the already-stretched-thin price-per-piece ratio feels like there was room to throw us a bone somewhere in the mix. But hey, those Dark Troopers alone will probably sell this set anyway.

And whether you’re using it as a launching point for your own, more detailed take on the Imperial hallway, or are content to just leave it as it comes out of the box, the backdrop on offer in 75324 Dark Trooper Attack still feels satisfying for a cheaper LEGO Star Wars playset.

For as surprisingly impressive as the hallway is, the meat of 75324 Dark Trooper Attack clearly lies in its minifigures. And whether this is intended as a battle pack or not, it’s a pretty puzzling line-up. If it is a pseudo-Dark Trooper battle pack, nobody needs an army of Luke Skywalkers (unless you’re planning some kind of Legends tribute to Luuke).

And if it’s not… why do we need three Dark Troopers? Would swapping one of them for another named character from The Mandalorian’s second season (one not included in 75315 Imperial Light Cruiser, for instance) have improved things? Probably not: you are buying this for the Dark Troopers, army of Lukes or not, and this is a character selection that makes sense for the scene and the set, regardless of any wider LEGO buying context.

Plus, they are all very cool minifigures – the Dark Troopers are interesting for how their glowing red eyes are printed on their heads, shining through gaps in their helmets to appear set back as per the on-screen droids, while Luke represents a notable upgrade on previous all-black outfits in almost every regard. (The jury’s still out on whether the LEGO Group has overthought that hood piece.)

How much are LEGO Star Wars fans willing to pay for the characters they want? Between 75320 Snowtrooper Battle Pack and 75324 Dark Trooper Attack, that seems to be the prevailing ethos behind the 2022 range so far. The former set represents a significant price hike on battle packs previous, while this set delivers the same number of minifigures – and a handful more basic, unprinted elements – for another £7 on top of that battle pack.

All that said, £25 (or $30 / €30) doesn’t feel inherently poor value, mainly because those minifigures are very good – even if three are repeated, which is sort of the point – and the corridor scene is actually pretty substantial, particularly next to the likes of last summer’s 75310 Duel on Mandalore. It’s not a throwaway build on the level of a traditional battle pack, so price comparisons to those sets may be a little unfair.

Is 75324 Dark Trooper Attack a battle pack? Does it matter? By the time you place that last sticker, and push in those last few tiles across the top of the back wall, chances are you’ll have found something across the 166 pieces and four minifigures to justify picking up one, two or even three copies.

That the parts are so generic (and all stickered) is really a boon if you can find it at a discount, opening the door to all sorts of Star Wars hallway builds, while the chance to grab three very cool Dark Troopers and probably the best Luke Skywalker minifigure yet shouldn’t be sniffed at.

75324 Dark Trooper Attack may be a curio in the current portfolio, but it’s in all the best ways – delivering a set that definitely isn’t perfect in its broad ambitions, but is at least trying to be.

75324 Dark Trooper Attack offers a 20-minute build stretched out to 30 minutes by the time it takes to apply its 15 stickers. It’ll still fly together, though.

How many pieces are in LEGO Star Wars 75324 Dark Trooper Attack?

There are 166 pieces in 75324 Dark Trooper Attack, precisely zero of which are printed. That reduces the value proposition, but it’s great for repurposing and adapting this hallway for non-Imperial settings.

75324 Dark Trooper Attack measures 18cm long (or 22cm long with the floor lever fully extended), 10cm tall and 9cm wide. The LEGO Group says it can ‘fit in a child’s backpack’, though we wouldn’t necessarily recommend it.

How much does LEGO Star Wars 75324 Dark Trooper Attack cost?