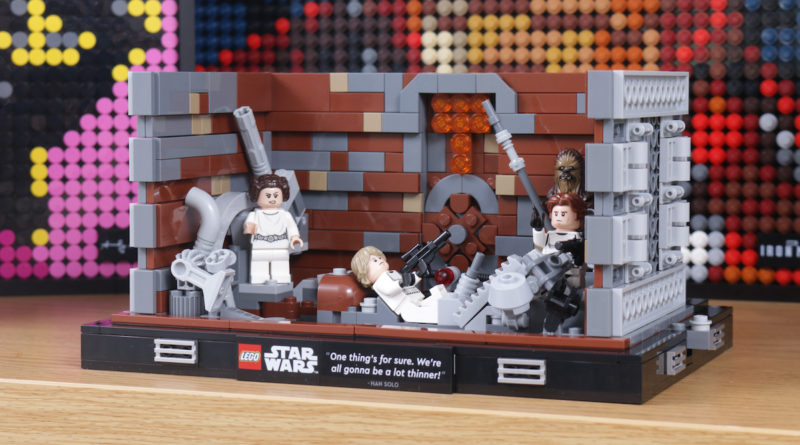 75339 Death Star Trash Compactor Diorama strikes a clever balance between display and play and is one LEGO Star Wars set not to overlook, even at that price.

What is LEGO Star Wars in 2022 without a contradiction or two? 75339 Death Star Trash Compactor Diorama has been designed for display but then hasn’t photographed so well in its official box art and promotional material. It’s part of a series of sets that are meant to sit on a shelf and be admired from afar, yet it has a very hands-on play function at its very core.

It’s also so very expensive, yet we’re going to spend the rest of this review telling you how great it is and why it points to a very exciting future for LEGO Star Wars. And at the end of reading this, we can only apologise if you too find yourself wanting this set, even at that price.

75339 Death Star Trash Compactor Diorama is part of April 2022’s LEGO Star Wars Diorama Collection, which represents a new creative direction for the theme, offering older fans a higher level of detail and authenticity at the expense of playability and other design considerations usually built into sets for younger audiences.

However, where 75329 Death Star Trench Run Diorama and 75330 Dagobah Jedi Training Diorama very much lean into the hands-off approach that comes with this new design ethos, 75339 Death Star Trash Compactor Diorama feels like the compromise to ease the wider LEGO Star Wars audience in. For what is essentially also a display-first LEGO set, 75339 Death Star Trash Compactor Diorama still comes with a notable play feature, indicative of perhaps one avenue the Diorama Collection could explore more of, without compromising on authenticity.

If you are going to recreate the trash compactor scene from A New Hope with any degree of accuracy and detail, then it needs to be able to function as it does in the film, and pleasingly, 75339 Death Star Trash Compactor Diorama does just that. Yes, previous trash compactor appearances in LEGO form – namely in both Death Star playsets – have also had walls that close in as you would hope, but certainly not to the same quality as is seen here.

While it is a play-orientated gimmick that sits in contrast with what is otherwise a display-based vignette, it creates an immediate sense of fun and interactivity to the set – from the anticipation of knowing that it can do it, to building the movement into the model, to then being able to activate it once the set is built. Is it cheating to include such a pivotal play function with a display-based LEGO set? Yes and no.

As mentioned, it’s necessary to the scene in question, and from an authenticity and quality perspective it adds a level of dynamism and literal movement that can’t otherwise be achieved in any other way. It does, however, also encourage a lot of touching and play – there’s nothing wrong with that, but it muddies the waters around the marketing for the series of sets that it belongs to.

No big deal, ultimately, as each set – while part of a wider collection – is best considered within its own context anyway. And in that regard, 75339 Death Star Trash Compactor Diorama absolutely shines as an enjoyable, hands-on, play-based display piece, capturing not only a level of build detail not previously seen in LEGO forms of this setting, but also the ability to ratchet up the tension just as it was on screen in A New Hope. In short, there’s no other way any LEGO Star Wars fan would have wanted the most authentic version of a LEGO Death Star trash compactor to be.

It’s a scene complete with the entire cast of characters too, including even R2-D2 and C-3PO who, otherwise in a different area of the Death Star entirely, are represented as standing on just the other side of the trash compactor here.

As is the case with 75330 Dagobah Jedi Training Diorama, the high piece count is misleading and otherwise inflated by the use of a number of 1×1 pieces throughout. These pieces do contribute to the greater level of eye candy and detail that these higher-level LEGO sets are offering, thanks to the display-guided design approach, but they do also contribute to something being rather much smaller than some may otherwise expect from a piece count of 802.

For the build itself, 75339 Death Star Trash Compactor Diorama may not be put together in quite the way you would expect, taking inspiration from live theatre, it turns out. It’s a smart and relatively simple design, all told, but one that maximises the visual effect of loose trash scrunching together as you move the walls closer, without any of the trash depicted actually being loose.

Indeed, as a construct, the base is smooth tiles that the two walls slide over. Sections of the flooring with the trash are connected to the walls and so move as they do. As we say, it’s a simple way around otherwise building a bare box and throwing a bunch of loose bricks in the middle, and it works so brilliantly.

In amongst the trash there are vantage points for the four characters of Leia, Luke, Han and Chewbacca to sit or stand as they try to navigate the junk around them as the walls close in, and these placement positions remain useable at any width you want to set the walls to.

As a mechanism, the closing walls work wonderfully and create an aspect to the set that ultimately elevates it in quality and authenticity. And on top of a very simple but highly effective play feature, 75339 Death Star Trash Compactor Diorama is packed with minifigures – it’s almost like a regular LEGO Star Wars set.

All six characters who you would hope to be included in 75339 Death Star Trash Compactor Diorama are here – Leia, Luke, Han, Chewbacca, R2-D2 and C-3PO. Chewbacca remains the same as most other sets he appears in, while Leia is the same version that has appeared in a couple of other sets from the last few years.

The other four, though, all carry new designs, with Luke and Han sporting new editions of the Stormtrooper outfit, minus the helmets. R2-D2 comes with back printing which, unlike in 75330 Dagobah Jedi Training Diorama, is nice and visible for how he stands on display, facing the control panel as he tries to slice it. C-3PO, meanwhile, has printed arms and even an extra sheen printed to his gold suit too, making for the fanciest version of the protocol droid so far.

With a look at the price and with consideration to where they are standing in the final model, though, would any of us have been too upset if the droids were left out of this set if it knocked £10 off?

This high price is essentially a consequence of prioritising the all-round experience of and authenticity across the set. The number of minifigures included is because they are all part of the scene and to miss one would be to perhaps write off the set’s value to collectors and fans. In addition, the piece count is as it is due to a high number of small 1×1 pieces and such like, through which comes the ability to offer greater colour variation, finer parts usage and overall better accuracy to what is being built here.

Higher-level LEGO building that prioritises all those aspects of authenticity is, seemingly, more expensive as a result. Is it worth that much? Not at all, it’s at least £20 too much and it will feel that way once you’ve built it too, for how relatively small it feels for such a spend.

75339 Death Star Trash Compactor Diorama has carved out its very own sweet spot between being a display piece and a full-on playset, thanks to a simple yet dynamic feature that harnesses the interactive potential of a LEGO Star Wars set – while still managing to add credibility and authenticity to something specifically designed for older collectors.

As a LEGO set, it looks and works way better than any of the marketing material can ever suggest, and it’s one of the highest-quality creations to come out of the LEGO Star Wars theme in years, feeling almost more like a custom model than an official set.

For everything that it achieves so well and so simply, though, 75339 Death Star Trash Compactor Diorama comes at a hefty, over-the-top price. Having your cake and eating it is usually not possible – the LEGO Star Wars team have found a way to make it happen here, but for anyone wanting to enjoy this future classic themselves, to paraphrase some LEGO set we’ve just built: one thing’s for sure. We’re all gonna be a lot poorer…

Support the work that Brick Fanatics does by purchasing your LEGO Star Wars sets through one of our affiliate links. The LEGO Star Wars Diorama Collection is available for pre-order now and officially launches on April 26.

75339 Death Star Trash Compactor Diorama takes about 45 minutes to put together, thanks to a lot of small parts and intricate steps along the way.

How many pieces are in LEGO Star Wars 75339 Death Star Trash Compactor Diorama?