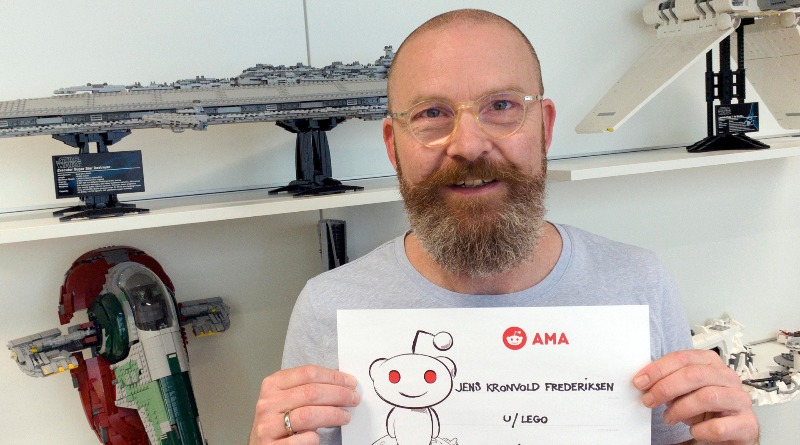 The LEGO guru has been with the Star Wars theme from the start, and now oversees the entire department. Twenty years is a long time at any job, but it means Jens is well-placed to share some revealing insights into the way the design team puts sets together.

So far, Jens has answered 13 questions, but he’s promised to get back to more over the course of the weekend. For now, check out his responses compiled below (unedited), which offer a glimpse into life on the LEGO Star Wars team. And, of course, you can chip in your own questions over on the reddit thread.

Willis2014: Take us briefly through the design process… I have always wondered, do you guys do a top down design? For instance, do you formulate an idea and THEN figure out how to make it happen with the bricks/pieces available? Or is the Lego engineering/brick building present at every point in the design stages?

Jens: We normally set the assortment first together with Lucasfilm. Then we create it in LEGO. We are always trying to make the models from existing LEGO elements, but sometimes we create new ones to get the design right.

Drewboy810: What is your all time favorite LEGO Star Wars set and why?

Jens: I have many favorites, one is the UCS Millennium Falcon 10179, as it was the largest LEGO set at that time. Another favorite is the Death Star sets, because they have a lot of minifigures, and you can play out all the scenes happening on the Death Stars in the movies.

Tusserte: Who decides the existing color palette for LEGO parts? For example, what prompted the return of turquoise and the new coral color in the past year? What is the process for requesting an existing mold in a new color? When existing elements aren’t enough, how does requesting a new mold for the set you’re designing work?

Jens: The color palette is set across the company each year, and we are all working with the same palette. In the project we can decide to make pieces in new colors, and we often do. When we are making new molded elements, in LEGO Star Wars most of these are used for minifigure parts e.g. wigs helmets. we are also making more regular LEGO elements, when we do that, we try to make them as universal as possible, so that they may be used for other things that what they were initially intended for.

Vandechoz: Did anything change much for you when Disney took over Star Wars?

Jens: Actually, not much changed at all! The design process is the same, and we are working together with the same people from Lucasfilm.

b3avis: Which brick do you like the most? And which one is the most versatile in your opionion?

Jens: The 2 x 4 LEGO brick is my favorite! it is the one that started it all, and with that brick only you can create almost anything. We are also using it as often as we can in LEGO Star Wars models!!

Jens: The light grey because it is used the most.

spsb89: Is there a chance of another AT-AT being released or even a possible UCS version?

Jens: I cannot answer in details about our future sets. We are always looking for new cool things, but as you might know we are also looking back and creating new versions of models we have made before.. So you never know what can happen!!

CX523: Was there a set you were fond of which never made it to shelves? I know lots love the Yavin IV set which was featured in one the books a while ago.

Jens: We have a lot of ideas, and create a lot of sketch models. Therefore not all of them end up as products. We keep them in the office, for potential future use! That is also the case with the Yavin IV model that was shown in the book.

steve626: Are you given a list of elements that you are encouraged to use because there are is a large number on hand? Or that they are easy for LEGO to produce? I’m thinking of the various colored parts that are hidden inside of builds, usually of contrasting colors to the rest of the build.

Jens: No we are not asked to use any specific colors for our models. The reason that we use a lot of colored elements hidden inside the models, is to give a better building experience. Imagine if you got a huge pile of only grey pieces! A model like that would be almost impossible to build! And finding the pieces would take forever!!

hoticeberg: Do you use 3D printers to prototype new models and pieces?

Jens: We are using 3d printers, in the designing process. When we create new elements, we need them right away for building models, so it is much faster to 3d print, then wait until the mold for the element is ready.

CadmusRhodium: What’s your favorite theme other than Star Wars and why? Always wanted to know what a designer would think.

Jens: I can only answer for myself here, and I like all LEGO, and very much LEGO Technic, I am amazed by the features and functions the LEGO Technic design team built into their models!

einch: You said you’ve built every LSW set—Which set(s) did you find the most difficult/time-consuming to build? Follow up: Which set was the most complex to design?

Jens: Both questions have the same answer! The UCS Millennium Falcon is both the most time consuming built, it was also probably the most difficult one to design, because of the size and weight, and because the models stability is important, and it gets more difficult the bigger the model is.

Stay tuned over the weekend as more LEGO Star Wars news rolls in from Star Wars Celebration, and don’t forget to check out the schedule of brick-related panels if you’re on the show floor.