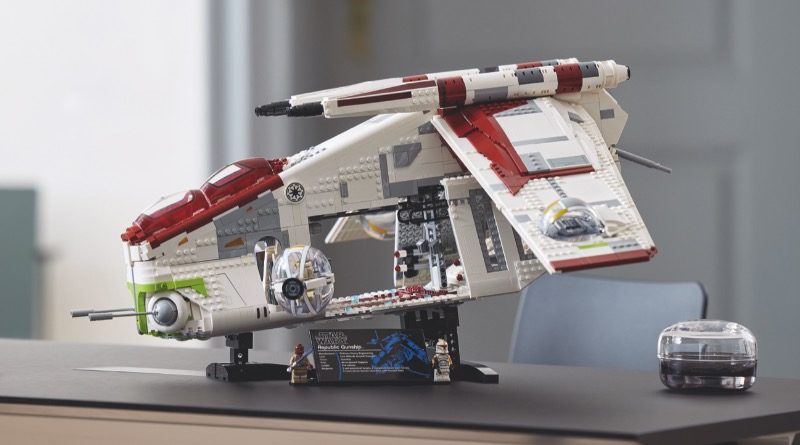 The prequel-trilogy ship triumphed over a potential UCS TIE Bomber and UCS Nebulon-B Frigate – both of which hail from The Empire Strikes Back – by an overwhelming margin. Some 30,000 people, or roughly 58% of all voters, chose the Republic Gunship back in February 2020.

That result has now materialised as 75309 Republic Gunship, which will land on shelves on August 1. And despite the LEGO Group’s apparent apprehension to produce prequel-trilogy Ultimate Collector Series sets, the Star Wars design team relished the opportunity to produce the first Episode I-III UCS set since 2010’s 10215 Obi-Wan’s Jedi Starfighter.

“We chose ships that we heard you say, ‘We’d like to see one day as LEGO models,’” Jens Kronvold Frederiksen, LEGO Star Wars Creative Lead, explains to Brick Fanatics. “[That was] basically all of them, so with this poll we were happy no matter what was picked. But I have to say that personally I’m so happy that it was the Republic Gunship or a prequel model.”

Does that mean we can expect to see more prequel-trilogy UCS sets in future? Only if 75309 Republic Gunship sells well – at least according to the set’s designer Hans Burkhard Schlömer, who’s also explained to Brick Fanatics that future sets essentially depend on its success.

Consider supporting the work that Brick Fanatics does by purchasing yours (when the time comes) using our affiliate links. Thank you!