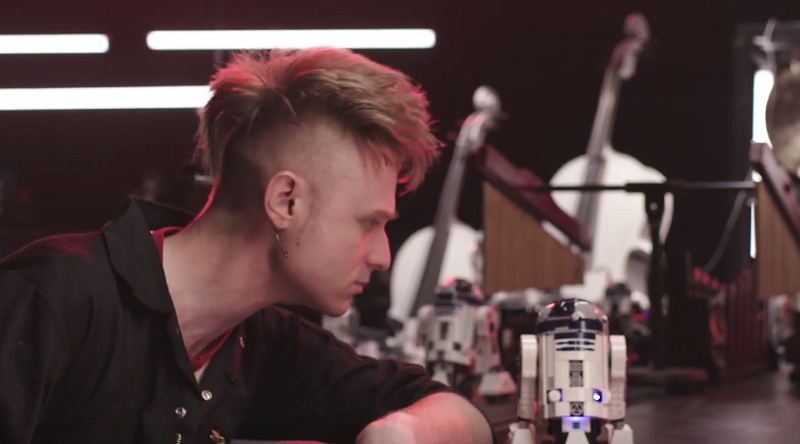 The musician behind it all is Sam Battle, better known as LOOK MUM NO COMPUTER. He had to pair each iPad to each droid individually, with the exception of a few static droids which he hard wired. He has explained a little about the instruments that were used in the video.

“The synths were MS10s and MS20s, I had most of them already, I borrowed a couple and they just look nice in a row. All of them monophonic, but between each synth was a tiny bit of overlap, the levers were pivoted in such a way the keys were quite light to push for the Gonks. This was a very solid setup that worked without fail every time,” Sam explains.

“The R2-D2s on the xylophones tended to drift, so before each attempt all of their heads needed to be reset to a centre point so the beaters would hit in time. I ended up doubling up the R2-D2s so their out of time nature wouldn’t be as noticeable (two droids on each note means more of a chance it is in time). The violins needed re-setting each time, luckily the song only needed three different notes from the violins, so four violins per note (and two for the least used note).”