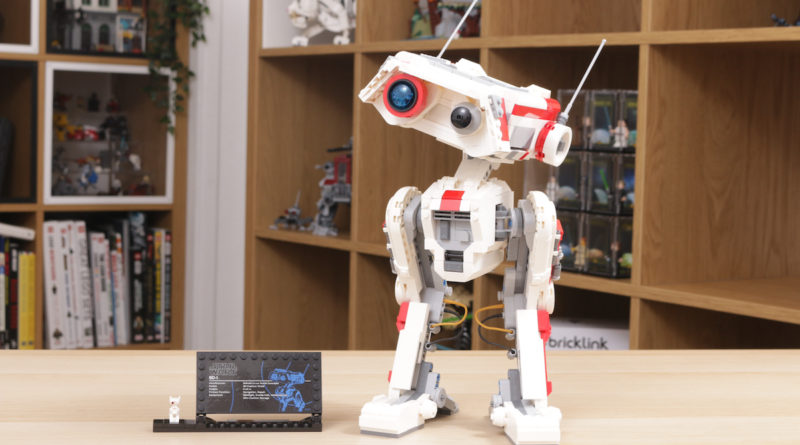 75335 BD-1 is the latest LEGO Star Wars set that takes a cute character from a galaxy far, far away and turns them into an even cuter LEGO set.

There’s not much to the formula behind LEGO Star Wars’ collection of sets based on some of the cutest characters from Star Wars properties. In short: make the model look like the character it is meant to look like and then give it some features that mimic the more personable features that make that character so popular.

Indeed, for that long list of similar, large-scale builds of some of the most adorably diminutive characters from Star Wars, 75335 BD-1 doesn’t feel like it’s treading much new ground, at least as far as concept goes.

As far as build and design goes, though, 75335 BD-1 certainly has to innovate, and as a result takes LEGO Star Wars in a new direction so as to not only capture the look and proportions of the small droid from video game Jedi: Fallen Order, but also aspects of movement that – for an otherwise expressionless character – are key to its personality.

As expected, it’s a Technic-based frame that creates the legs and offers the stability to hold the little walker upright, that’s then covered in plate-based constructions that slot into place. Connecting to the central body with particular joint pieces allows the legs decent range of motion forward and backward, as well as the option to angle inwards and outwards. The size of the feet and the position they’re locked into means there aren’t many walking poses that really suit 75335 BD-1, but the ability to angle the legs in or out certainly offers a lot more dynamism than you may initially expect.

The neck connection between the body and head is surprisingly light, but locked into place and rigid enough to take the weight of the large, flat head and still offer a little bit of a wobble when you move him. All the movement of the head then comes from a connection point with the neck further up into the head, allowing it to angle up and down, and also tilt left or right. The head also charmingly includes a tray to open up and carry some stim canisters, which are used in Jedi: Fallen Order to restore health and Force levels for your character, Cal Kestis.

Around all of this are the bodywork details, colours and angles that make BD-1’s appearance unique to him, from the red and white colour scheme and the small details of bodywork that run up each leg, to the LED lights on the back of his head that glow when you run into darker areas of the map in Jedi: Fallen Order, and of course those mismatched eyes framed in such a way to give him an almost inquisitive expression.

As a literal walkthrough of everything that is built into 75335 BD-1, that’s quite a list of functions and attributes, and building at this larger scale with a piece count as high as 1,062 certainly makes all that possible. It means that at the end of the six sets of numbered bags, stood before you is an almost 1:1 replica model recognisable and true to the character that loyally assists you through Jedi: Fallen Order.

More important than just replicating the appearance and functionality of the little droid, though, is the movement that has been built into those different parts of 75335 BD-1 – the legs and head – to offer a range of poses and subtle movements that perfectly mimic the on-screen character. It is through those movements that BD-1’s expression and personality is felt in the video game and is perfectly captured and brought out again in LEGO form here.

This version of BD-1 may not be able to hop on your back or walk around too well, but he stands there and looks just as cute and just as engaged and ready to take any instruction you ask of him, just as if he came straight out of the video game. It is the sense of who BD-1 is as more than a basic droid that makes him so likeable and intrinsic to the progress and story you experience in Jedi: Fallen Order, and it is this that is so wonderfully brought to life again in 75335 BD-1. The only thing missing is a sound brick to press and hear some of his very particular boops and whistles.

Alongside the large-scale version of BD-1, 75335 BD-1 includes a minifigure-scale mould of the character to sit on the UCS-style plaque that comes with the set. Less detailed and less mobile, it serves as a neat bonus inclusion that doesn’t need to be the focus of anything in particular.

That BD-1 exists at that scale, though, gives hope to more Jedi: Fallen Order sets to come in the future.

There certainly is more to the design and build of 75335 BD-1, so as to capture the same charm and appeal as previous LEGO Star Wars buildable characters – it is a more complex model in a number of ways – and, combined with the inflationary pressures that exist in 2022, it’s not so surprising to see this higher price. A little costlier than we’d prefer, but for just how good the model is, we challenge you to look him in the eyes and be mad after building him.

75335 BD-1 is just the latest in a long line of buildable LEGO Star Wars characters that not only accurately capture all the details and authentic aspects of what we see on screen, but also manage to quite skilfully build into a LEGO set that same charm and personality that made us fall in love with the character in the first place.

It’s an oversimplification to boil down the approach the LEGO Star Wars team takes to these buildable characters as ‘just’ making it look like the character and giving it that same charm and personality that we see on screen, because those two things alone are not always so simple to accurately translate into LEGO form. That the LEGO Group continues to do so is remarkable and should not be taken for granted. 75335 BD-1 is the latest example of such brilliant LEGO design work and yet another must-have LEGO set waiting for you to build and fall in love with.

LEGO Star Wars 75335 BD-1 takes about an hour to put together, in a build spread across six sets of numbered bags.

LEGO Star Wars 75335 BD-1 measures about 34cm tall with the antennae, and up to 17cm wide if you point his feet outwards. The set stands about 18cm deep from the back of the feet to the front of the head.