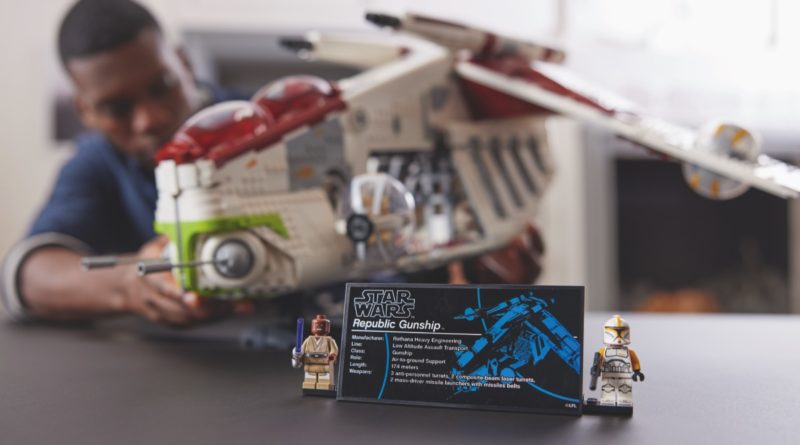 The latest issue of the LEGO Star Wars magazine corrects one of 75309 Republic Gunship’s most divisive design decisions.

When the first prequel trilogy-inspired Ultimate Collector Series set in over a decade landed on shelves last summer, the primary point of conversation in the community – for better or worse – centred on its minifigure line-up. In the original LEGO Ideas poll that led to the Gunship being selected for a future UCS set, the LEGO Group asked fans which characters they’d like to see included.

While we’ll probably never know exactly what the results of that write-in submission were, it feels safe to assume that there wasn’t overwhelming support for ‘Mace Windu and a generic Clone Commander’. But that’s exactly what we got, which led to some ire among the fan community – especially following comments from the design team regarding those choices.

“It’s just not okay to put a super-rare minifigure into a super-high price point, because not everybody can afford it, and those minifigures will be super-sought-after,” Hans Burkhard Schlömer told Brick Fanatics and other Fan Media in 2021. “But in this case, I think we found a good middle ground: we picked a Jedi, Mace Windu, and a Clone Commander, which also doubles as a pilot for this vehicle.

Those quotes have since been enshrined in LEGO Star Wars history for all the wrong reasons, with the LEGO Group’s seemingly casual attitude towards accuracy flamed by a vocal and outraged subset of fans across reddit, Instagram and other online communities. But no matter: Immediate Media’s LEGO Star Wars magazine is here to right all those wrongs.

The January issue of the mag includes a spread devoted to 75309 Republic Gunship, but as picked up on by reddit user Archie_0898, there’s one pretty major difference: seated in one of the twin bubble cockpits is a Clone Pilot minifigure, with very different yellow markings to those of the actual set’s Clone Commander.

It’s wildly out of scale with the UCS Gunship, of course, but that’s not the point. For those fans feeling burned by the minifigure selection of a set that – as Hans also noted last summer – is ‘really not about minifigures’, this artwork feels like a consolatory nod from the folks behind the LEGO Star Wars magazine.

If you want to pop a more accurate Clone Pilot minifigure on the display stand of 75309 Republic Gunship, there’s always BrickLink, where you can pick up an Episode II variant (with printed legs!) starting from £14.50.