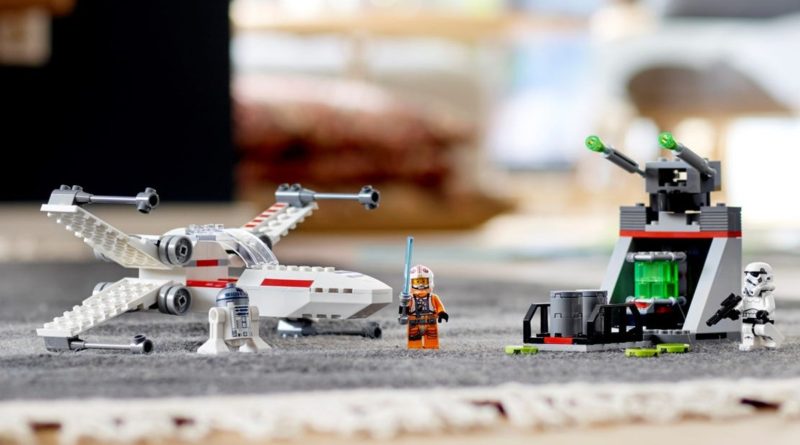 The three rumoured LEGO Star Wars scene sets have received new details, including piece counts in a summer 2022 report for the theme.

Following the reveal of a scene-inspired model in LEGO Jurassic World with 76956 T. rex Breakout, more details for the rumoured trio of Star Wars sets that may follow a similar design have been reported by Promobricks.

These details have not been officially confirmed and should be treated with caution, but reports of a Walmart press release suggest that the first may be revealed as soon as March 24.

Reported for a reveal at Walmart’s Collector Con 2022 event, 75329 Death Star Trash Compactor is said to include 666 pieces for €59.99 with four minifigures of  Princess Leia, Chewbacca Luke Skywalker and Han Solo, similar to the room in the previously-released Death Star models (pictured above).

The model is rumoured to be of the compactor itself with brown and grey walls on a 20 stud wide base. Grey pieces are reported as junk on the floor as well as a tile with the “One thing’s for sure. We’re all gonna be a lot thinner.” quote. Provided this information is accurate, you may see it on shelves from May 1.

Also rumoured for May 1 is 75330 Trench Run with a reported piece count of 1,002 pieces for €79.99. It is said to not be minifigure scale and include a diorama about 26 studs wide on a black base with models for Luke Skywalker’s X-Wing, Darth Vader’s TIE Advanced and two other TIE fighters.

The quote in this creation is rumoured to be “The force is strong with this one”. This scene has arguably been underrepresented in LEGO Star Wars with creations covering it so far including the retired 75235 X-Wing Starfighter Trench Run.

75339 Dagobah is rumoured to depict the training of Luke Skywalker on the swamp planet with minifigures of Yoda, Luke and R2-D2. With a potential base reported to measure around 50×20 studs in size, the source notes that they believe two-thirds of the model to be Yoda’s hut wrapped in tree roots.

The rumour suggests that we may see this for sale from May 1 too for €89.99, though there is no reported information for the piece count. The quote is listed as “Do. Or don’t. There is no try.”