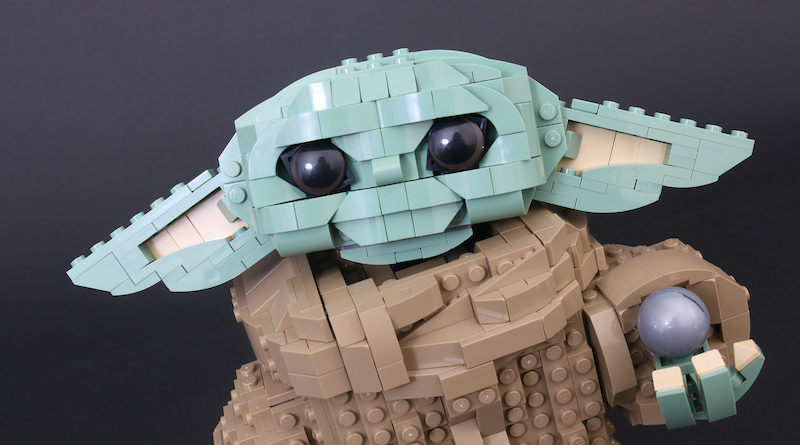 Anyone looking to adopt the cutest, most expressive Baby Yoda ever need look no further than the LEGO Star Wars The Mandalorian set 75318 The Child.

It’s fair to say that right from his first appearance on the Disney+ show The Mandalorian, the Child has taken centre stage. Within this new chapter of Star Wars lore and across internet memes, t-shirts, merchandise and toy aisles, Baby’s Yoda’s impact has been quite remarkable, particularly so for a character unable to speak. Thanks to a repertoire of ever increasingly cute expressions and reactions, with the occasional baby coo or cry, the Child represents both a powerful plot device to tug at the hearts of any Star Wars fan following The Mandalorian and an ingenious marketing ploy that has created an army of would-be parents looking to adopt the little guy.

That latter aspect means that there is a barrage of Baby Yoda toys hitting the market at the moment, with the LEGO Group very much contributing to that. He has been included at minifigure scale across a few sets present and upcoming, in a BrickHeadz set and as a larger, buildable character here in the form of 75318 The Child.

Importantly, whilst anything released in this wave of popularity – LEGO or otherwise – can be viewed somewhat cynically as opportunistic, 75318 The Child is so incredibly well designed and thought out that it guarantees not only the authenticity any LEGO Star Wars fan could wish for, but also the perfect, truly expressive and so utterly cute version of the character that anyone looking to adopt Baby Yoda is looking for.

Building at this larger scale and with a reasonable number of pieces to play with, the most important expectation to meet in recreating a character like The Child centres around its expression. And between the general construction and shaping of the head and the carefully thought-out movement of specific features, the LEGO Star Wars team has perfectly caught not just one of Baby Yoda’s expressions, but a whole catalogue. This character is, as much as a story device for the Disney+ series The Mandalorian, a walking meme, full of visual actions and reactions specifically based around having this amazingly cute face packaged in such a diminutive size.

Everything that makes him this marketable toy that is universally adored is in his features and his expression – he doesn’t talk, he simply coos and aahs, he barely walks around, he more shuffles and needs to be carried. The reactions that his existence as this 50-year-old baby evoke are based on very simple, familiar behaviours, packaged in new and interesting way (when Star Wars story telling is at its best and most universally popular). And through clever construction, every element of what makes The Child so unique and loveable are perfectly captured in this 1,073-piece LEGO model.

It’s a Technic frame build with panels for each side of the body, very much in the same vein as 75255 Yoda (review) and 75187 BB-8 before that (review), before the head is constructed and placed on top. That head comes with a surprising perception of movement – he (or rather you) can actually only move it forward and back ever so slightly, allowing him to look up or straight ahead, but that slight movement is accentuated greatly by these huge, black eyes. Such is the size, depth and clarity of their graphic design, they appear to look wherever you imagine them too. Certainly, his head doesn’t angle up and down that much, but like a painting in a gallery, you’ll swear you know exactly where those eyes are looking. His head may not point down so as to look at the silver ball he is holding, but it’ll really appear like he can and does look down directly at it.

The eyes are crucial to the success of 75318 The Child – they complete the picture in front of us and are why, after you have built it, you’ll be able to so much more immediately recognise the model in front of you for who it is meant to be, rather than what. 75255 Yoda takes some adjustment to get used to, specifically because of the terrifying, unsettling nature of his eyes. 75318 The Child demonstrates a lesson learned, and a move from brick-built design to graphic art. The character sits in front of you, and, in this case, with a range of emotions to express too.

That is thanks to the movement caught in the mouth and ears of the model. Alongside the fluid, subtle motion at the neck, this LEGO Baby Yoda’s ears can move up and down independently of each other, and his mouth can open slightly too. It’s not a long list of moveable parts in the head, but perfectly reflective of the piece-count available and, truly, all that the model really needs. Move the ears down and have the mouth shut and the little guy is sad – open the mouth and he’s afraid or crying. Put one ear up and he’s playful and intuitive, then close the mouth and he’s up to no good. And so on. There are endless hours to be spent playing with a whole range of expressions and, importantly, such is the strength of this set’s design, every single one looks exactly like The Child. The only range of expressions missing are those with his eyes closed – but it would probably have demanded a higher piece-count (and final price) to have been made possible.

Further range in movement and expression, though, is also offered through the three-fingered hands. The arms may be fixed in position, but the ball-jointed wrists and clip-and-bar fingers allows Baby Yoda to be holding something or trying to use the force.

Included alongside this upscaled build of The Child is a baby minifigure version. It’s the same design as in 75292 The Mandalorian Bounty Hunter Transport (review) and is equally as adorable sat on the accompanying display stand for 75318 The Child. Its head is rubber in material and captures a brilliant Baby Yoda expression at a tiny scale.

In terms of price, 1,073-piece 75318 The Child compares favourably to other brick-built larger scale characters. He comes in £15 cheaper than 75187 BB-8 in spite of being a similar height and piece count, and he’s also £20 cheaper than 1,771-piece 75255 Yoda. 75278 D-O was the most recent buildable character and scored highly on accuracy but, at £5 cheaper, the lack of playability and interactivity in comparison to 75318 The Child is notable, as is the piece-count of 519.

Aside from literal value on the price-per-piece front, 75318 The Child demonstrates the LEGO Star Wars design team’s ever-increasing understanding of building at this scale. What didn’t work with previous characters has been fixed and works so well here.

And even putting appreciation for design to one side too, 75318 The Child ticks pretty much every box any fan of The Child. It’s what you’d hope a LEGO model of the character could be, capturing not just one recognisable, utterly cute expression of Baby Yoda, but a whole range of them. There are very few – if any – Baby Yoda elsewhere toys on the market that can do that.

The LEGO Group knocks it out of the park with 75318 The Child. This is the best buildable character so far and a credit to the LEGO Star Wars design team’s continued application of the highest possible standards. What they achieved in previous, comparable models was pretty great, but, in putting together 75318 The Child, they have crafted a wholly authentic and expressive recreation of a much-loved, adorable character from a new chapter in the Star Wars galaxy.

75318 The Child is as close to LEGO perfection as it comes, a guaranteed future classic and just as much a great toy for the Baby Yoda-obsessed where LEGO isn’t their thing. It sits high on our list of Top 20 LEGO Sets with good reason. Be you Mandalorian or Empire, casual Star Wars fan or meme-sharing Baby Yoda-adopting obsessive – everything that everyone loves about this tiny character is wonderfully captured in 75318 The Child.

You can directly support the work that Brick Fanatics does by purchasing your LEGO Star Wars sets through one of our affiliate links.