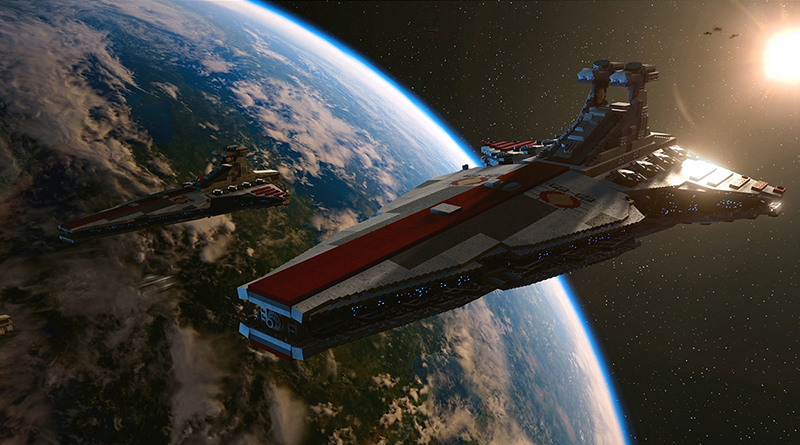 First reactions are coming in from those who have had the opportunity to see LEGO Star Wars: The Skywalker Saga in action.

At E3 2019, the video game event that has been taking place in Los Angeles, California, fans have been getting gameplay demonstrations of LEGO Star Wars: The Skywalker Saga. The new LEGO video game was announced a few days ago at the event with a teaser trailer and will be released in 2020.

As the title suggests, LEGO Star Wars: The Skywalker Saga will cover all nine episodic Star Wars films, from Episode I: The Phantom Menace to the upcoming Episode IX: The Rise of Skywalker.

Several journalists were able to watch a gameplay demonstration at E3. Here, Brick Fanatics shares four key pieces of reaction that give a good idea of what has changed since the last LEGO Star Wars video game:

You can play any movie in any order using any character from those movies. For the purpose of our presentation, we chose the universe of Return of the Jedi. We started off flying in the Millennium Falcon in the middle of space on our way to Tattooine. However, on our way there, we were interrupted by a massive Star Destroyer who deployed a bunch of TIE Fighters to come after us. Of course, a dog fight commenced in the emptiness of space.

On Tatooine, the developers took us by Luke’s workshop, and his T16-SkyHopper, on Lars homestead before going back out towards the market. Despite being a hands-off demo, one thing was instantly clear: the camera controls have been dramatically improved. On the back of the Bantha it was easy to rotate and control what you wanted to see and explore. This creature was also the victim of a showcasing of how you can use Jedi mindtricks on other lifeforms (He’s a good dancer!).

Lightsaber combat seems far more fluid and deeper, it’s not just *smack, smack, shatter into pieces*. It’s more authentic to the true Jedi experience and feels less rudimentary. If you’re playing as someone like Han Solo or Lando, you can properly aim now instead of just locking on to the entire enemy and firing. You have a reticle and can freely aim at the head, legs, arms, body, and so on with key body parts being more critical than others.

As Luke, they showed off the Force by being able to pick up and throw any piece of Lego. We saw him lift and throw rocks and bushes, which can be used for combat. He even managed to throw a rock into a net, causing Luke to celebrate (it’s a Lego game, after all. There’s bound to be some silliness).

Improved combat? Check. Improved Forced powers? Check. Start with any movie? Check. More open world options? Check. This might be the greatest LEGO video game ever released – fans only have to wait until 2020 to find out…