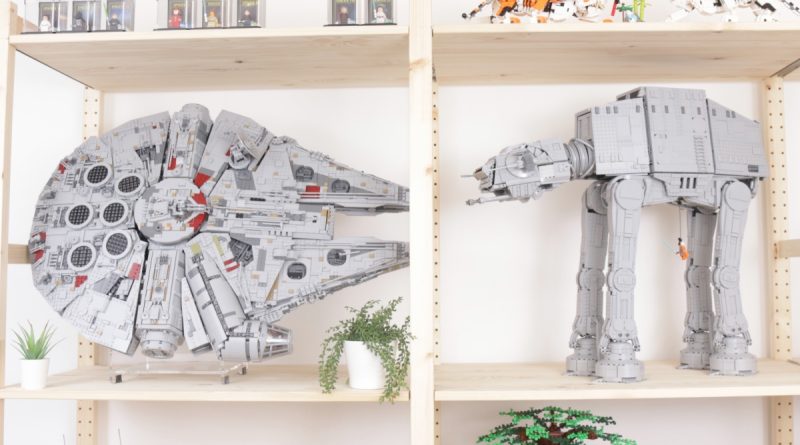 At some point the LEGO Group will retire 75192 Millennium Falcon, so what might take its place in the Ultimate Collector Series?

Ultimate is defined as ‘the best achievable or imaginable of its kind’. It’s probably fair to say that when the Ultimate Collector Series was launched back in 2000, its ambition outweighed its ability. Looking at some of those early UCS sets with the benefit of 20 years of hindsight, they stretch the definition of ultimate to, and sometimes beyond, breaking point. 10026 Special Edition Naboo Starfighter, for example, is made from 187 pieces, which arguably makes it a glorified polybag – but an elegant design and some beautifully chromed parts are its saving grace.

After some fairly average ‘Ultimate’ sets, along came 10030 Imperial Star Destroyer in 2002, and five years later the epic 10179 Millennium Falcon. From then on, ultimate really meant ultimate. Huge sets and fantastic designs that were laden with detail were the order of the day, making each new entry in the UCS catalogue a must-have for Star Wars fans. Although we’ll just skip over 75098 Assault On Hoth…

Along the way we’ve had some remakes. Some, like 75144 Snowspeeder and 75181 Y-Wing Starfighter, were major upgrades and improvements on the originals, while sets like 75192 Millennium Falcon and 75252 Imperial Star Destroyer were more about bringing back popular designs.

As the current UCS Falcon celebrates its fifth birthday we have to consider that it will be retired at some point (even if not any time soon). So what might replace it? For this piece, we’ve decided not to consider remakes, but look at five new ships that would be good candidates for the ‘ultimate’ treatment. Our only criteria was that they had to be recognisable – there are a large number of ships in the Star Wars universe that only the most hardcore of fans could identify – and they have to be substantial. Sorry, speeder bike fans.

While the name may not trip off the tongue, this organic-looking ship is instantly recognisable from the Battle of Hoth. As Imperial troops threatened to overrun the base, the order was given to evacuate, and these workhorses of the Rebel fleet carried many members of the Rebel Alliance to safety. With that curved carapace though, it might be difficult to replicate accurately.

Is it recognisable? Is it even fair to include a ship that’s never appeared in a Star Wars film? Just ask the three million gamers who bought a copy of Knights of the Old Republic. Although the design owes more than a little to the Millennium Falcon, the Hawk has enough personality to stand on its own. Darth Revan is an extraordinarily popular minifigure among LEGO Star Wars collectors. It’s likely they’d be just as keen to see a UCS version of Revan’s ship. Alright, maybe this one is more of a pipe dream.

One of the most elegant craft in the Star Wars universe, the Naboo Royal Cruiser is something of a long shot on this list for two reasons. Firstly there is barely a flat surface to be found anywhere on the ship, which is a problem from a design perspective. And secondly, around half the parts would have to be chromed to give it the finish it deserves, a fact that we can’t see getting past the accountants at the LEGO Group. We can dream though.

This multi-purpose ship, usually appearing on screen as a medical frigate, has been longed for by LEGO Star Wars fans everywhere. Eventually they were thrown a few crumbs back in 2020 when 77904 Nebulon-B Frigate appeared as a Comic-Con exclusive, and it later went on to receive a limited release. But at only 459 pieces, it’s a mere hint of what it could be, if it were given the UCS treatment. The only fly in the ointment is that this is clearly a design that was built for zero gravity. Coming up with a UCS scale model that wouldn’t snap in half might be asking too much.

A mainstay of Star Wars Rebels, but also making a fleeting appearance in Rogue One, the Ghost is another product of the Corellian Engineering Corporation. It appeared in mid-sized LEGO form back in 2014 as 75053 The Ghost, but would look considerably better at UCS scale. And with a possible reappearance in next year’s Ahsoka TV series, we reckon this is perhaps the likeliest replacement for 75192 Millennium Falcon from the five we’ve picked out here.

It might be five years old, but 75192 Millennium Falcon is still as popular as ever. You can see all our articles celebrating the birthday of this iconic ship in our Falcon at Five hub.

You support Brick Fanatics when you buy your LEGO through our affiliate links. Thanks.