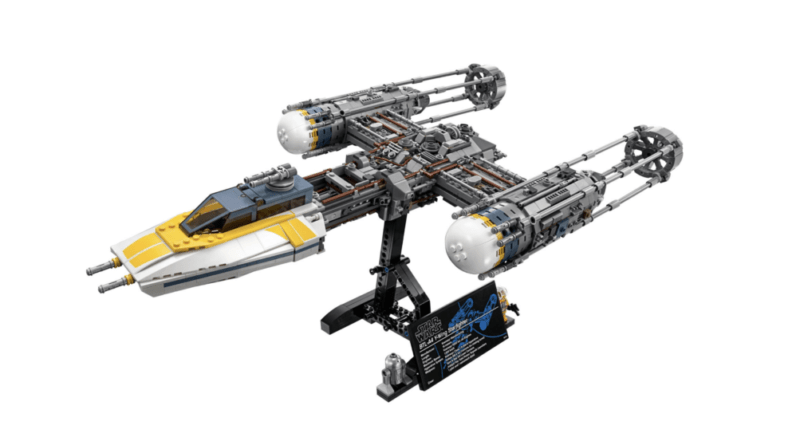 Those who have pined for an Ultimate Collector Series Y-wing since it vanished from store shelves in the mid 2000s can finally add the starship to their collections with the release of 75181. Brick Fanatics predicted it would be a worthy entry in the LEGO Star Wars UCS line, but how does the model fare in person?

It is a tricky time to be a LEGO Star Wars Ultimate Collector Series collector. With 32 entrants now in the theme, the LEGO Group is starting to update models that were produced early in the theme’s history. Starting off in 2013 with 10240 Red Five X-Wing Starfighter and really picking up steam last year with both 75144 Snowspeeder and 75192 Millennium Falcon, this is a trend that does not seem to be going anywhere. It leaves long term collectors with a conundrum – should precious monies be spent on an updated version of a ship they already possess? In the case of this set the answer to that question is an unequivocal yes. When pictures first surfaced of this set in early April, Brick Fanatics opined that 75181 Y-wing Starfighter appeared to have hit almost every high note, delivering what will surely be a must have set for Star Wars fans; this has come to pass.

High levels of detail are an expected trait of UCS Star Wars sets at this point, but the Y-Wing takes it to another level. Extensive greebling on nearly every surface imbues a movie accurate level of detail that does not falter no matter how close one looks. Many of the 1967 pieces included are small bars, clips, pins, open hinges, and other similar elements that are laid out in a seemingly random way that somehow looks intentional when viewed as a whole. Greebling was not something that designers at the LEGO Group had a lot of experience with in 2004, when this set’s predecessor was released. The improvement is dramatic and makes 10134 Y-wing Attack Starfighter look almost silly by comparison. The colours are now more movie accurate and the texturing feels less forced, more seamless.

75172, the latest Y-Wing Starfighter at System scale from last year, definitely seems to have informed the design and colour scheme of this model. That is great news, because it looks really good. This shows in the pictures, but the effect when holding the ship in hand is even more dramatic. Despite the rough texture, this is a visually appealing model due to the incredible level of movie accuracy on every front. The colouring, texturing, proportions; everything is spot on.

Unlike last year’s Falcon which included no display stand, 75181 Y-wing Starfighter sticks with tradition and does. Sitting at a slight angle, all of the model’s fine points are on full display making for an eye popping showcase; designed to sit on a shelf 75181 is sure to be a conversation starter.

For those who are wondering, the ship is not to the same scale as 75192 Millennium Falcon or 75060 Slave I. Those models were designed to be roughly to scale with minifigures. Despite the instructions calling for, and the compartment being sized to accommodate, a minifigure in the cockpit, the ship is far too large for that scale. Rather it appears to be roughly in keeping with the scaling of 10240 X-Wing Starfighter. Paired together these two will make an awesome display piece.

For better or for worse, the LEGO Group appears to be applying the same approach to UCS sets that it did to the System scale versions over the last 15 years. Take a ship and incorporate improvements that dramatically improve it from one release to another. The initial model looks good until the successor comes out and then suddenly the previous version looks inferior by comparison. First the UCS X-Wing, then the Death Star, then the Snowspeeder and finally the Falcon have all followed that pattern. This makes models such as 75181 Y-wing Starfighter must haves both for collectors who have the previous version and those who don’t alike.