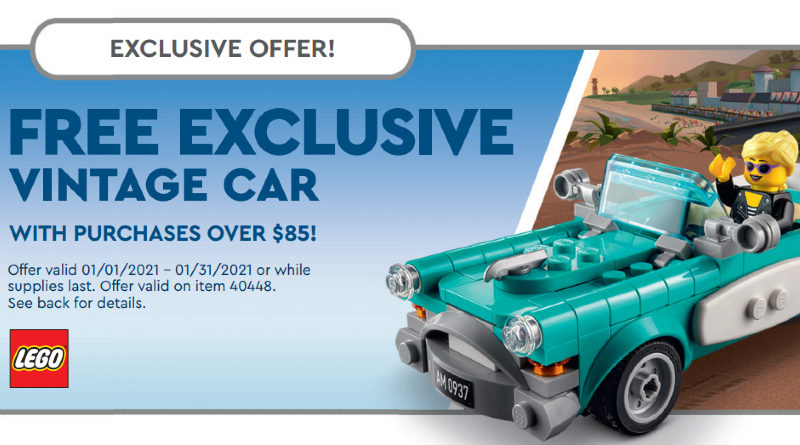 LEGO fans can now get their first look at the upcoming offers and gift-with-purchase items that will be available alongside the new 2021 sets.

The new LEGO Store US calendar for January 2021 is now available finally revealing 40448 Vintage Car and other upcoming offers to redeem alongside the release of the new range of sets across various themes.

The LEGO Store calendar reveals that throughout the month online and in-store from January 1 to January 31, 40448 Vintage Car will come free with orders of $85 or more. This set has been revealed before, in a LEGO Ideas contest but now the purchase threshold is known for this previously rumoured gift-with-purchase set.

Also available from January 1 to January 31 in-stores and online will be 30628 The Monster Book of Monsters with orders of LEGO Harry Potter sets of $75 or more. Also available only at LEGO.com will be a free 30566 Police Water Scooter or 30567 Fire Helicopter with orders over $40.

These three offers launch alongside many new 2021 sets, including the recently revealed 71741 NINJAGO City Gardens, the release date of which is marked on the calendar as the 10-year anniversary of NINJAGO. Other new sets included on the calendar are 10280 Flower Bouquet and 10281 Bonsai Tree, both of which have been reviewed.

Offers for other regions are currently unknown but Brick Fanatics has reported before that 30628 The Monster Book of Monsters will be available in the UK.