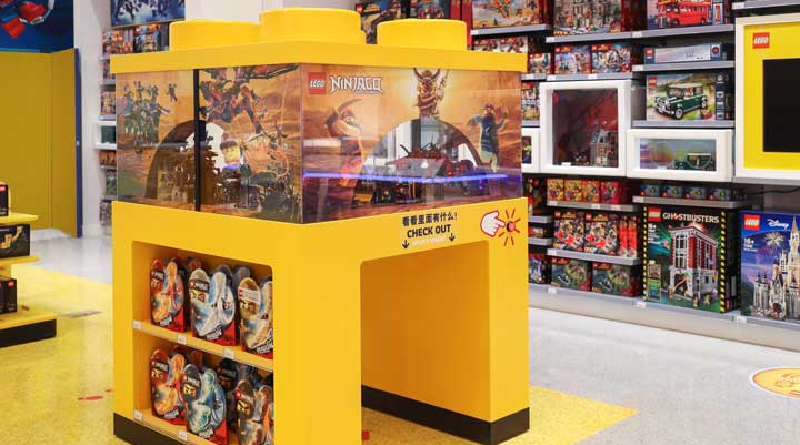 As the LEGO Group places increasing importance on the growing market of China, the company has opened a new flagship LEGO Store in Shanghai. It is only the second LEGO Store in the country, with the other located at Disneyland Shanghai. The retail outlet can be found in People’s Square, in the centre of the city, covering two stories and featuring all-new interactive experiences.

The new interactive features are themed around Future of Shanghai, with Future City Play Tables, encouraging visitors to the store to build their own future cities and think about planning issues such as harmony with nature, renewable energy, modern architecture and cultural heritage.

Another new inclusion is the Immersion Portal, which allows children to enter a giant LEGO City or NINJAGO model box, where they then find themselves inside the world of the respective theme. Once inside, the children will hear sounds, with lights and movement on 3D models immersing them inside their favourite LEGO themes.
Like the LEGO Store Leicester Square and the LEGO House in Billund, the new store has the Mosaic Maker – an experience in which the guest has their face recreated in 1×1 LEGO tiles. It costs 999 yuan, approximately $145. 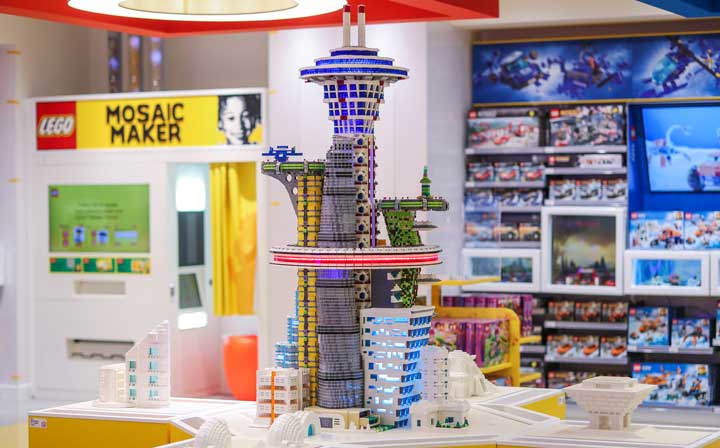 The first ever LEGO Doll House has also launched at the LEGO Store People’s Square, with customers able to design the interior of a fully lit three floor building. Large models of the Pearl Tower of Shanghai and a Shanghai Skyline are two of the location specific models built for the retail destination, between them using four million LEGO bricks.
Other features at the new shop include moving display windows, master builder play tables, brick pathway, DisPLAY cases, video screens and a special LEGO playlist.

“We are excited to open this new flagship store in the very heart of Shanghai. We aim to inspire and develop the builders of tomorrow through creative LEGO play and this store is all about that,” said Paul Huang, Senior Vice President of the LEGO Group and General Manager of LEGO China. “Our store brings more opportunities for Chinese children, parents and LEGO fans of all ages to explore the many different LEGO products and experiences while enjoying a truly unique and high-quality engagement with the LEGO brand.”

“Our LEGO stores are a great tool to build the brand awareness and emotional connection to our fans. We hope our visitors will be excited by what they experience here, and this helps grow their passion. These stores allow us to have direct engagement with our fans, helping us to deliver truly awesome shopping experiences,” said Senior Vice President of the LEGO Group and Head of LEGO Retail, Claus Flyger Pejstrup.

If you don’t want to travel to Shanghai to buy your LEGO sets, visit shop.LEGO.com.