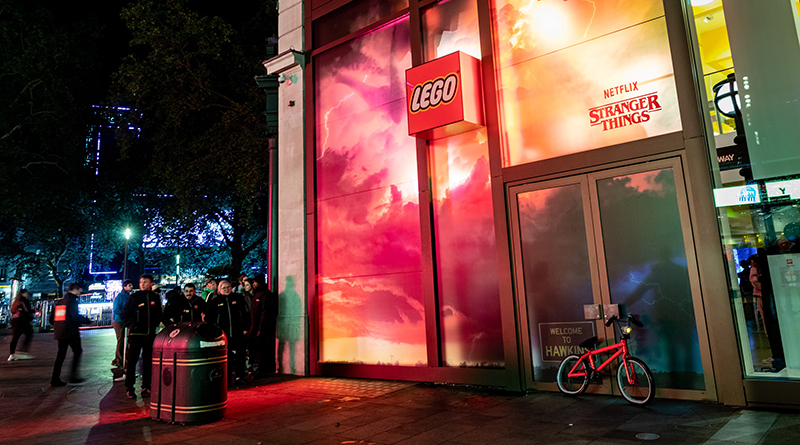 Brick Fanatics gave Editor Graham Hancock a flashlight and a walkie talkie, then sent him off on his bicycle to the LEGO Store Leicester Square for the midnight launch of LEGO Stranger Things 75810 The Upside Down

May 14, 11.30pm. There it is, the reliable queue of LEGO fans outside the Leicester Square store, giving the cameras the shots they need to prove just how desirable the latest LEGO exclusive is. LEGO Stranger Things 75810 The Upside Down (review) has been teased by the LEGO Group for weeks, and now the set is about to be unveiled to the world.

Michael Birdsey and Philip Thorn arrived at 3.30am on May 14, ready for over 20 hours in line – naturally, that put them first and second in the queue. “I queued for a couple of events now. Millennium Falcon, that was a midnight release, it was raining in September and very cold. Harry Potter castle, that one,” Michael says.

So why is he queueing for LEGO Stranger Things? “I had never heard of it before. I haven’t even had a peep of the set online or nothing. It’s something different, isn’t it?”

He is not the only one though. “I am afraid I have never seen Stranger Things on Netflix before,” laughs Mike Freeman, of Central LUG. “But I love LEGO and I love new sets and I love the atmosphere around launch events.”

Other fans waiting to be let in were much more au fait with the series though, having come in costume. “I have the costume anyway because I like to cosplay and I do conventions,” explains Tasha, who has been in line since 9.30pm, dressed as Joyce’s alphabet wall. “I got to reuse something I used last year. Big fan of the show so I don’t mind wearing something embarrassing now and again.

“It started as ‘oh this is going to be a cool show, it’s got loads of 80s references,’ and it ended up being something that was far more daring and entertaining than anyone expected,” says Tasha.

Jack Buist is also in costume, going for a general 1980s vibe – with a few show specific touches. Is he more of a LEGO fan, or a Stranger Things fan? “Very, very in the middle,” he says. “LEGO my whole life, Stranger Things I have watched since it came out.”

Further back in the queue are people who have turned up closer to the start time. “I like LEGO, I am collecting toys and I watch the Stranger Things series on Netflix – I fell in love with the story and characters,” says Pine Chirathivat. She has not attended a midnight opening before, but the combination of LEGO with Stranger Things was too appealing to resist.

The LEGO Big Ben model strikes midnight as May 15 arrives, with spooky decals now covering the front of the LEGO Store Leicester Square. The world now gets its very first look at LEGO Stranger Things 75810 The Upside Down. When the doors open, smoke engulfs the entrance as the first few fans walk inside.

Once inside the store, attendees head upstairs to go and pay for the set, which is limited to two per person. There is also an opportunity to build a ‘make and take’ model, which is Will’s fort – a nice little build to accompany the set itself. As is to be expected, it proves popular and draws crowds.
A live build is also taking place, with a LEGO Brick Specialist putting together 75810 The Upside Down at the store’s demo station.

After customers have built their fort and paid up, they return downstairs. En route to picking up their shiny new LEGO Stranger Things set, there is a chance to have a photograph in the Byers living room – with special LEGO props, including a giant Eggo, upscaled classic walkie talkie element and Barb is missing poster.

When fans have had their fill of posing next to 1980s vinyl records, they enter the final line to be the very first people to pick up LEGO Stranger Things 75810 The Upside Down and have it signed by LEGO Senior Model Designer Justin Ramsden, who makes time to speak to each fan as he autographs boxes.

Around the world, fans are now enjoying the images and video that has been released on the latest big, impressive LEGO exclusive release – but for around 250 fans who ventured out for a midnight launch, they are heading home with the set ready to start building… whether they have seen Stranger Things or not.