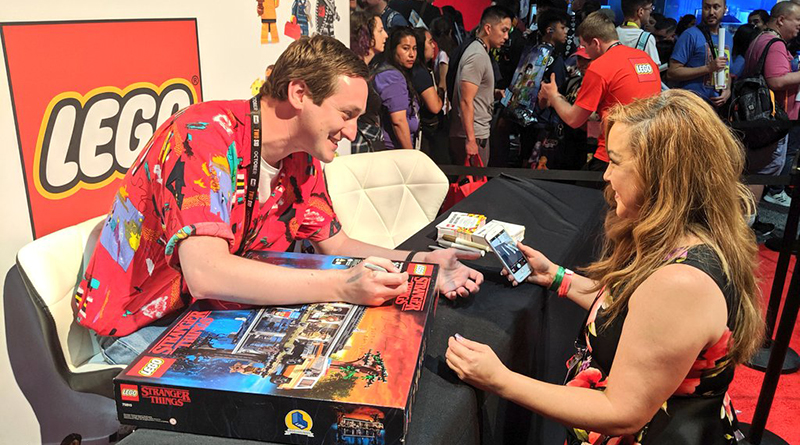 The LEGO Group has been celebrating Stranger Things at San Diego Comic Con with a designer signing and a very limited minifigure.

LEGO Stranger Things launched this year with 75810 The Upside Down and with San Diego Comic Con being the perfect place to connect with fans of the series, the LEGO Group has been pushing the new exclusive set at the event. Beyond the Brick is at the event covering all of the LEGO goings-on.

Senior Model Designer Justin Ramsden has been signing for fans at the show, appearing at the LEGO booth on both Friday and Saturday.

An exclusive LEGO Stranger Things minifigure, Barb, has been available at the event. To get the minifigure, fans had to join a line that lasted for hours in order to potentially get one – a piece of software would then select at random whether each person would receive a free minifigure or not.

The line for the #SDCC @LEGO_Group @netflix @Stranger_Things Barb minifigure is crazy. Thanks to all that took the effort to queue for hours…! #SDCC19 #LEGO #LEGOSDCC pic.twitter.com/p2Z5Xh92TB

Announced exclusives that fans at the event have been picking up are Stranger Things Barb, Star Wars 77901 Sith Trooper Bust, Marvel 77902 Captain Marvel and the Asis, Marvel PS4 Spider-Man, DC Zebra Batman and DC 77903 The Dark Knight of Gotham City.

Here is a round-up of the daily LEGO acvtivity taking place at San Diego Comic Con 2019.