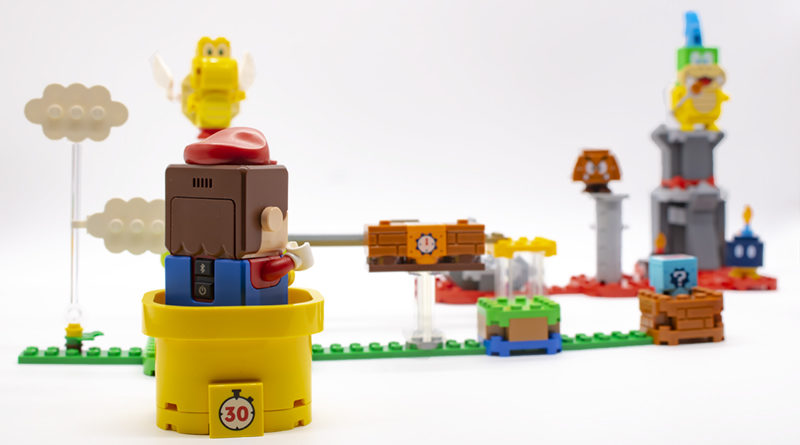 As a relatively new theme, LEGO Super Mario has been a success. A hybrid of LEGO, video games and board games, the sets offer brick-built versions of the most iconic and well-loved characters from the Mushroom Kingdom, from the lowly Goomba right up to Mario’s arch-nemesis Bowser. With every set comes new action tiles to interact with, new enemies to defeat and new ways to enhance your LEGO Mario courses.

LEGO Super Mario 71380 Master Your Adventure Maker Set contains four enemies for Mario to battle against, one being an exclusive mini boss, as well as a new 30-second Start Pipe, giving players just half the time to complete a course, and a new customisation machine that allows the power-ups of two item blocks and a time block to be customised. Will all that shiny new content be enough to take your courses to the next level?

The set includes six numbered bags, containing all the parts needed to build the new customization machine as well as various platforms, decorations and characters. There’s also a separate bag containing a number of red, green and blue plates of various sizes used to connect everything together. There are four characters to be found here: a Goomba, a Koopa Paratroopa, Bob-omb, and Larry, the second of Bowser’s kids to be introduced to the theme – more on these later.

Characters aside, there are also two completely new elements within this set. The first is a 30-second Start Pipe, complete with printed ‘30’ tile and a new action tile. Once activated 30 seconds (as opposed to the standard 60) will flash up on Mario’s chest, and the bonus theme from Super Mario 64 plays.

It’s a really great mechanic to introduce into the theme as it cuts the time given to complete a course in half, leading to some pretty frantic, fast-paced gameplay. The only downside is that the standard 60-second and new 30-second Start Pipe cannot be combined into the same level, so when designing a course it’s worth bearing in mind what time restriction you want to place upon the level.

The second new element is the customisation machine, a steampunk-like device that allows Mario to choose the power-ups contained within the two exclusive item blocks. This ranges from bonus coins and stars to mushrooms or – if you’re feeling particularly mean – a poison mushroom. Compared to some of the other elements in the set, this requires the most amount of actual building, although fans familiar with the LEGO Super Mario theme will know that still doesn’t mean much.

It’s an interesting little contraption using splat gears to create a rotating turntable on top with a small plunger to the side. To operate, an item box is placed inside, with Mario then placed on top. As the machine’s gears are cranked, various icons appear on Mario’s chest. When the desired power-up is shown, simply take Mario off the machine, press the button to pop up the block, and voila: your own personal mystery block is ready to go. It’s a nice way to add even more customisation to a level and when playing with more than one person it becomes a fun way to add variety and mystery to a play session.

The set also includes a variety of different terrains for Mario to traverse, including grass platforms, raised desert areas and a mini castle surrounded by lava, along with a small sliding bridge that rewards the plumber even more coins.

The entire model will take around half an hour to assemble, as it’s mainly just plates and small environments, with the only real builds being the brick-built Larry and the new customisation machine, both of which are over fairly quickly. There’s no real suggested layout for a course once all the elements have been completed, apart from what’s presented on the box, so you’re free to design whatever course you want (the pictures included in this review are examples of the kind of layouts that can be put together).

There are also a few different landscapes to navigate thanks to the fire, water and grass sections, and the varying heights of platforms offer a number of different verticality options too. The freedom and creativity on display will certainly add longevity, and once combined with other sets, the new elements will add a fun new dimension to your LEGO Super Mario courses.

Of the four characters included, only Larry is brand new – the Bob-omb, Goomba and Koopa Paratroopa all re-use designs we’ve seen before. However, four enemies for Mario to battle feels like a decent number to offer a variety of play options, especially combined with other sets.

Each enemy requires a different number of bounces from Mario to defeat. Goomba takes one, the Koopa Paratroopa needs three, and the Bob-omb also takes just one – but once you activate him, you’ll have a small window in which to repeatedly bounce on him for a huge coin bounty. If he explodes while Mario is on him, however, you’ll lose it all. Larry acts as the mini boss of the set and needs five hits before he’s defeated.

As with all the characters within the LEGO Super Mario theme, they look incredibly accurate to the source material, while still retaining that LEGO charm we all love.

While having the option to add a new 30-second challenge to your LEGO Super Mario courses and the ability to customise a number of items and time blocks sounds appealing, the cost to do so seems incredibly overinflated.

LEGO Super Mario 71380 Master Your Adventure Maker Set hugely succeeds in some areas, and really falls down in others. As a set that enhances the LEGO Super Mario experience it’s a definite winner. The 30-second Start Pipe adds a really exciting and at times heart-stopping experience to a course. The customisation machine also offers a neat way to add power-ups (or power-downs, if you opt for the poison mushroom) and the extra time granted by the customisable time block will no doubt come in handy, especially when using the 30-second Start Pipe.

However, the fact this set costs the same as 71360 Adventures With Mario Starter Course is cause for alarm. There simply isn’t enough in here to justify that price tag. There’s only one exclusive character – surely there should have been more, given Mario isn’t even included? The part count is also considerably lower than other sets that retail for the same price, or even less.

As a set that adds a lot of value to the LEGO Super Mario experience it’s worth picking up, but the price point is seriously questionable. If you are an avid LEGO Super Mario fan then this will offer some refreshing new ways to play, but if you’re looking to get into the theme or add to the Starter Course, there are far more entertaining – and cheaper – sets out there for you to try first.

Support the work that Brick Fanatics does by purchasing your LEGO Super Mario sets using any one of our affiliate links.

How long does it take to build LEGO Super Mario 71380 Master Your Adventure Maker Set?

71380 Master Your Adventure Maker Set is not an involved build at all. The two most engaging elements are Larry and the customisation machine, both of which are very simple to put together. Overall, this will probably take just half an hour to complete everything included.

How many pieces are in LEGO Super Mario 71380 Master Your Adventure Maker Set?

There are only 366 pieces included in 71380 Master Your Adventure Maker Set, and a majority of those are the plates and small platforms. There are also four brick-built characters.

Giving an accurate measurement for 71380 Master Your Adventure Maker Set is tricky as there is no real specific layout. You can make the set as small or as large as you like.

How much does LEGO Super Mario 71380 Master Your Adventure Maker Set cost?