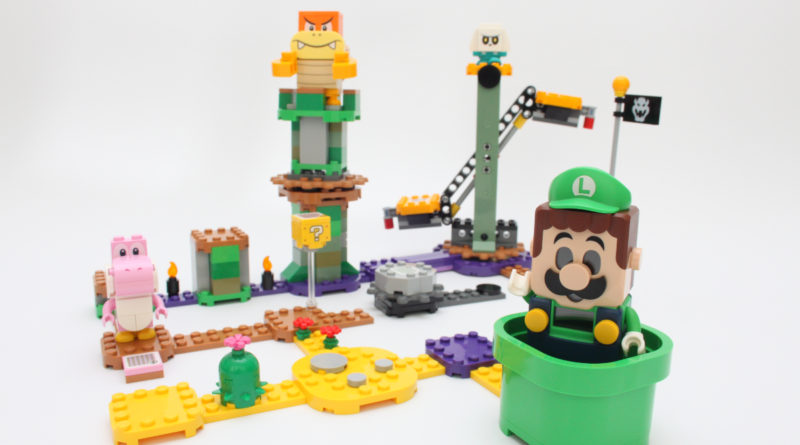 The LEGO Group finally brings multiplayer to LEGO Super Mario in 71387 Adventures with Luigi, a starter course designed to work in harmony with your existing Nintendo layout.

When 71387 Adventures with Luigi was first revealed in April, the only question on anyone’s lips was: does this mean multiplayer is coming to LEGO Super Mario, an interactive theme that has so far been a predominantly solo affair?

The answer, as we now know, is a resounding yes. But just how well do the Mario Bros work together in LEGO form? And can 71387 Adventures with Luigi stand on its own as a solo starter course for Nintendo fans who prefer the green-suited plumber to his stockier twin brother?

Unless this is your first rodeo with the LEGO Super Mario theme, you’ll know that all of this product line’s sets eschew instruction manuals altogether. Instead, you’ll need to load up the accompanying app to learn how to assemble 71387 Adventures with Luigi, which still feels like a cumbersome process for swifter builders, especially when a paper manual is still included in the box for the initial set-up of LEGO Luigi.

The build experience itself should also feel pretty familiar to fans who’ve picked up any other sets in this interactive theme, (especially 71360 Adventures with Mario), largely because it still relies heavily on the same unique part palette that ties every aspect of LEGO Super Mario together. That’s ostensibly no bad thing, ensuring 71387 Adventures with Luigi is compatible with past, present and presumably future Super Mario models.

It does mean, however, that there will be few surprises in store. And because Luigi himself accounts for much of the set’s budget, it’s not the meatiest of builds, either. The level modules that are present represent much of the new tower biome and feel crucial to the overall layouts that you can create. However, the build experience isn’t really what you’re coming to any LEGO Super Mario set for. These models are all about the gameplay – and on that level, 71387 Adventures with Luigi certainly delivers.

Sure, the same flaws that have plagued the Super Mario theme since the start are basically all still there: the rules and limitations that traditional video games provide aren’t present in physical form unless you create them yourself; moving your carefully constructed course is basically impossible given the flimsy connections between areas; and interacting with certain sub-assemblies (read: bouncing on them) will see them destroyed while trying to beat the timer.

With that said, 71387 Adventures with Luigi includes a familiar, but different gameplay experience than its Mario counterpart, with an introductory seesaw obstacle offering a taste of the multiplayer element that persists across all of the theme’s summer 2021 sets. In terms of models, 71387 Adventures with Luigi feels like an evolution of the Super Mario starter course formula – including its characters – which is exactly what you’d want a full year on from the original set.

Our ‘characters’ review subhead has never been more appropriate than in the Super Mario theme, because these aren’t really minifigures by any definition. Instead, the characters included in 71387 Adventures with Luigi are either brick-built or – in the case of the eponymous plumber – crafted using a digital element wrapped in that familiar plastic.

Luigi takes his cues from Mario in design, but this isn’t a simple reskin. The dimensions of both digital figures are ever so slightly different, reflecting Luigi’s taller and slimmer frame. His legs and head are both longer than Mario’s, while his torso is slightly shorter. He still bears the same 1×1 round tiles on his dungarees, ensuring some amount of design harmony across both bros, but Luigi makes use of a new hat element that includes a more pronounced curve on the brim – thereby extending the height of the brick beyond the red version.

It all adds up to a character that feels just different enough from the original digital figure, mirroring the difference in their video game designs.

Just as important as Luigi’s physical design is his character, with much of his reactions to gameplay elements bearing a strong similarity to Mario. He jumps, sleeps, runs and even gets knocked out just like Mario. To help differentiate the two, Luigi offers a fresh coat of paint on top of the Mario move set, retaining the same functions but with a new voice and tone. Inarguably the most important part, though, is the fact that Luigi and Mario can interact with each other, as any brothers should be able to.

With a simultaneous push of the Bluetooth button at the back of each figure, the eager Luigi greets his brother with a cheerful hello as the pair don yellow capes with the Bluetooth emblem. The interactivity available across these two characters is extensive, going further than most of the video games on which they’re based, and there’s likely plenty of potential waiting beyond 71387 Adventures with Luigi and into current and future expansion sets.

Also included are Boom Boom, a Bone Goomba and Pink Yoshi, all of which bring new and distinct options to the table for a Super Mario course. Another colour for the species that first appeared with the more familiar green variant in 71367 Mario’s House & Yoshi Expansion Set may feel slightly repetitive, but those who have yet to grab that expansion pack will no doubt appreciate getting a version of this iconic character.

Pink Yoshi also brings a twist to the usual interaction, with an appropriately-coloured digital silhouette now appearing on the screen and remaining there to lend a hand to Luigi. Notably, the addition of Pink Yoshi means that this set features one more character than the original 71360 Adventures with Mario starter course, while retaining the same price point.

Boom Boom is the newest boss in the Super Mario theme, but doesn’t offer anything new (knock over, jump, earn coins, repeat). Nonetheless, it’s an authentic brick-built recreation of the henchman who commands the Bone Goomba in fending off Luigi. A limited amount of movement allows you to pose the figure’s arms in the iconic swinging motion from the games.

71387 Adventures with Luigi comes in at the same price tag as 71360 Adventures with Mario, but includes a few more parts and one extra character. Beyond that, there’s very little to separate them. And either way, you’re essentially paying for the price of the digital figure – but next to 71380 Master Your Adventure, which retails for the same price (and only a handful more parts) without any electronics, it feels like pretty good value.

As either an alternative entry point into the LEGO Super Mario franchise or a means towards multiplayer, 71387 Adventures with Luigi positions itself well among the wider line-up of interactive Nintendo sets. There’s still reason enough to pick it up even if you already own 71360 Adventures with Mario, and it’s a perfectly fine starter course if you’re yet to jump on board the LEGO Super Mario hype train.

In fact, it’s fair to say that 71387 Adventures with Luigi is a better introduction to the theme than Mario could initially provide, showcasing how the theme has evolved so far – and will likely continue to do so.

Support the work that Brick Fanatics does by ordering 71387 Adventures with Luigi or any of the new Super Mario sets using our affiliate links.

How long does it take to build LEGO Super Mario 71387 Adventures with Luigi?

You’ll spend around an hour putting together 71387 Adventures with Luigi and setting up the digital figure (don’t forget your screwdriver), a good chunk of which involves tapping through the frustratingly app-only instructions.

How many pieces are in LEGO Super Mario 71387 Adventures with Luigi?

How big is LEGO Super Mario 71387 Adventures with Luigi?

71387 Adventures with Luigi is a difficult one to measure because the course can really be configured in any way you choose. You could go compact, or spread your wings and fly. For the sake of storage, though, it all handily fits in the box for later use.

How much does LEGO Super Mario 71387 Adventures with Luigi cost?