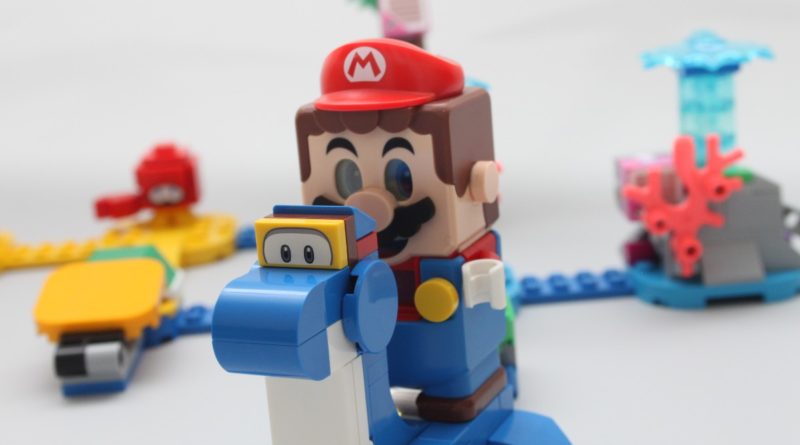 71398 Dorrie’s Beachfront makes waves in the world of LEGO Super Mario with a seaside scavenger hunt, but doesn’t offer anything overly exciting.

LEGO Super Mario is heading to the beach for 2022 with a range of sets inspired by levels with an ocean view, and the plucky plumber is also bringing along a new friend. Dorrie makes their debut in this set as another exclusive character that brings a new mode of transportation to the theme.

However, even with the low price and unique figure, there’s still the question of whether or not 71398 Dorrie’s Beachfront is impressive enough to stand alone as a fully-fledged seaside expansion, or if it’s better as simply an introduction to the new area.

The contents of 71398 Dorrie’s Beachfront are not quite as naturally kinetic as other LEGO Super Mario models, but still feature plenty of functions. The jets of water bring something new to the theme, with a transparent sculpture that adds fresh colours to the variety of modules, and inspires creativity in the buildable courses by providing another platform to jump on.

A platform of simple sand is also included, with a thin ramp that is intended for a green shell to travel up, hitting the Huckit Crab and offering Mario or Luigi an opportunity for some coins. In theory, this sounds like a fun feature – but in practice, the ramp is too small to reliably work, unless you deliberately keep the Huckit Crab loose enough on the plate to fall over naturally.

The other three modules are dedicated to one combined feature, using the same trio of pink blocks from 71368 Toad’s Treasure Hunt but at a much more affordable cost. Their inclusion here is greatly appreciated and completing each simple task to find all three is surprisingly enjoyable, especially the destruction of the sandcastle, which can even be done while riding Dorrie.

Only two characters feature in 71398 Dorrie’s Beachfront, one of which is the namesake of the build. Starting with the main attraction, Dorrie is designed to have enough room for LEGO Mario or Luigi to ride. Dorrie’s recreation greatly resembles Yoshi in earlier sets, but is no less adorable.

The flat structure that allows it to easily carry Mario gives it the appearance of an inflatable pool toy, with the white scannable sticker acting as the hole in the middle – a fitting coincidence considering the beach locale of 71398 Dorrie’s Beachfront.

In gameplay, however, Dorrie is not as entertaining. The new mode of LEGO Super Mario transportation does not allow you to take to the skies like the cloud and 71396 Bowser Jr.’s Clown Car, instead prompting you to slide along the floor as Dorrie squeaks as it moves (through the LEGO Mario or Luigi figure). While not disappointing, the movement is not nearly as entertaining as other options, and it’s just as easy to imagine Mario jumping through the water instead of having Dorrie take him there.

The Huckit Crab returns from 71386 Character Packs – Series 2 and works in the same way it did previously, offering coins upon defeat. This isn’t anything new, but the nature of the build is charming enough and fits well with the setting of the model.

71398 Dorrie’s Beachfront is priced at £24.99 / $29.99 / €29.99 and feels just right at that cost. The included gameplay elements on their own are not as notable as other, more expensive sets but still provide plenty of possibilities when combined with the rest of LEGO Super Mario. Being able to get a taste of the desert and water biomes at such a low price point is also a tempting deal for those who have yet to try out either.

However, all of that isn’t quite enough to make this Super Mario expansion a must-have, so we can only really recommend it to anyone who feels the need to add Dorrie or the trio of pink blocks to their collection. The fun they provide is enough to offset the low asking price, though it has to be said that there are plenty of bigger and better LEGO Super Mario expansions to put your money towards.

How long does it take to build LEGO Super Mario 71398 Dorrie’s Beachfront?

71398 Dorrie’s Beachfront won’t take you long to finish, with a build time of around 23 minutes, or slightly longer depending on your speed.

How many pieces are in LEGO Super Mario 71398 Dorrie’s Beachfront?

With 229 bricks, 71398 Dorrie’s Beachfront has a decent price-per-part ratio, though that isn’t always the best indication of value as gameplay is just as big a part of LEGO Super Mario.

In the suggested configuration, 71398 Dorrie’s Beachfront measures 12cm high, 36cm wide and 27cm deep, but you can mix and match the modules in any way you see fit.

How much does LEGO Super Mario 71398 Dorrie’s Beachfront cost?