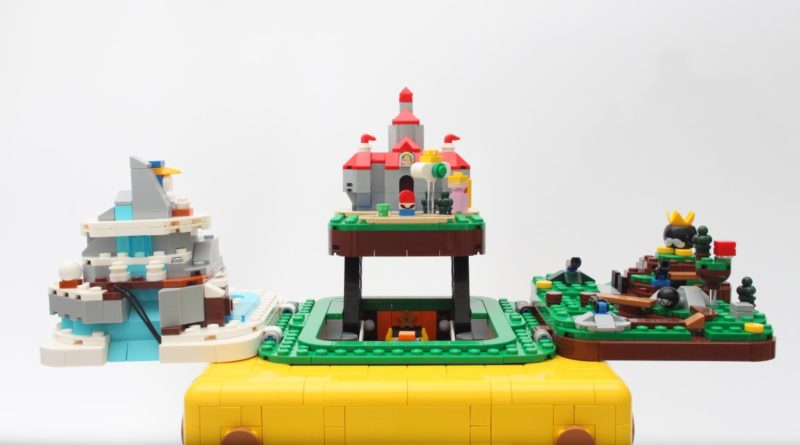 LEGO Super Mario 71395 Super Mario 64 Question Mark Block approaches a classic game in a unique package, but can it live up to the legacy of its source material?

With a legacy and fanbase spanning over two and a half decades since its release in 1996, Super Mario 64 has achieved classic status among the hallowed halls of video game history, leaving the corresponding LEGO model with some sizeable shoes to fill.

Presenting itself as a block not originally from the game, 71395 Super Mario 64 Question Mark Block has a lot to live up to with a title as iconic as this. It also follows 71374 Nintendo Entertainment System as the second huge LEGO Super Mario model aimed at an older audience and, although it covers a completely different concept, the connection and inevitable comparisons can’t be escaped.

However, the classic charm of the Question Mark Block is an image that anyone will know, giving this new set a wider appeal. As such, it’s only fair to give 71395 Super Mario 64 Question Mark Block the chance it deserves and see if it has enough surprises, nostalgia, and other interesting elements for both players of the original game and newcomers alike.

When it was first revealed, the initial model for 71395 Super Mario 64 Question Mark Block appeared to be nothing more than an upscaled recreation of the Question Mark Block, which also appears in the normal range of sets such as in 71360 Adventures with Mario Starter Course.

However, beneath the yellow and white exterior of the model lies a treasure trove of levels and other secrets that, while partially spoiled within the build, are sure to surprise anyone that you might wish to showcase 71395 Super Mario 64 Question Mark Block to. Let’s take a moment to appreciate the outer layer before moving inwards.

Five of the six sides are covered on the Question Mark Block, with only the bottom remaining open. While it could have been covered, the bottom isn’t noticeable in any way and that would have only added to the part count and price. Otherwise, this is an excellent representation of the iconic block with an eye-catching design that is pleasing to see.

The true creativity of 71395 Super Mario 64 Question Mark Block blossoms when you start to fold open the top, with a unique mechanism that doesn’t quite resemble any other LEGO sets.

Pushing down on the flat section of the block will begin to open the side, as it flips around to allow a colourful mix of bricks held within the cube to be displayed on the apex. Manually unfolding these like a book then reveals four levels from Super Mario 64 in what is a surprisingly satisfying process.

These levels include Princess Peach’s Castle, Cool Cool Mountain, Lethal Lava Land, and – possibly the most iconic of them all – Bob-omb Battlefield. Considering the community that has blossomed around the original game and the internet culture it has inspired, these are the four most obvious choices for courses to recreate in bricks.

One minor complaint is that three of the four levels make use of green predominantly (counting Lethal Lava Land’s base layer as part of the build), creating a consistent aesthetic that only makes Cool Cool Mountain stand out.

It may be a matter of opinion if this will come as a positive or a negative depending on your tastes, but ultimately it feels out of place in terms of the colour palette. However, the course simply couldn’t have been left out of 71395 Super Mario 64 Question Mark Block, and the height it adds next to Bob-omb Battlefield helps it to stand out alongside the grey colour scheme of Princess Peach’s Castle.

Finally, there’s a secret, additional level in the Super Mario 64 set, with Bowser’s boss battle platforms represented in a hidden chamber (spoiler alert!). The function of this Easter egg is instantly familiar and proves how intimately the designers know the source material – and we haven’t even mentioned the mini Bowser figure yet.

But that’s not all: just like 71374 Nintendo Entertainment System, this latest Super Mario direct-to-consumer set can also interact with the digital Mario and Luigi figures, which can be obtained from either 71360 Adventures with Mario Starter Course or 71387 Adventures with Luigi Starter Course.

Scanning either figure on the included RFID codes will trigger a scavenger hunt that’s jam-packed with Easter eggs and references to the game, which only the most dedicated of players will recognise. However, the last challenge did feel especially difficult, and we’d like to see the movement requirements toned down in a future update, as figuring out the clue is a task in itself for those not familiar with the Super Mario 64 community.

The characters of 71395 Super Mario 64 Question Mark Block are admittedly not Super Mario minifigures – we’re still playing the waiting game for those – but with just a few bricks the miniature representations are wonderfully recognisable, with the Bowser figure being a particular stand-out.

From Mario using three bricks to King Bob-omb being part of the level to even the hidden Yoshi placed on the roof of Princess Peach’s Castle, the number of included characters might not be the minifigures that we’ve been waiting for, but their size and features make them perfect for posing around the set to recreate your favourite moments from Super Mario 64 – while also being recognisable caricatures of the franchise’s most iconic characters.

While there may be those who are disappointed with the lack of printing on the Bully, none of the characters in the set have eyes (bar Mr. I). Even the Bowser tile puzzle is missing a pair of peepers, and although they would have been appreciated there and elsewhere, they may have been especially difficult to fit given the other prints – Mario’s moustache is big enough on his miniature face already.

71395 Super Mario 64 Question Mark Block sits a full 22 studs across when folded, and substantially more when unfolded, but the asking price of £149.99 / $169.99 / €169.99 can still feel a little high considering the lack of an exclusive minifigure – something which the LEGO Super Mario theme still sorely needs.

However, the scale and concept of this set make it clear that being minifigure-scale or even minifigure-adjacent was never the intended goal. At its core, this is a displayable, commemorative model for Super Mario 64, with a familiar outer design that – while not from the original game – is undoubtedly appealing.

Compared to many other LEGO for Adults creations available in official stores, the price of 71395 Super Mario 64 Question Mark Block is pretty reasonable. For instance, looking at the other massive LEGO Super Mario model – 71374 Nintendo Entertainment System at £199.99 / $229.99 / €229.99 – the price feels fair, with a smaller piece count explaining the difference.

Ultimately, the value of 71395 Super Mario 64 Question Mark Block will depend on how much you love the original game, or simply the design itself. The asking price for the latest huge LEGO Super Mario creation is fair, but not generous – even with the bonus of spare printed Warp Painting pieces.

LEGO 71395 Super Mario 64 Question Mark Block is a brick-built love letter to one of the most iconic video games in the industry, and a pioneer for the 3D platforming genre. Considering the age of the title, it was never likely to be included in the main LEGO Super Mario theme, with Luigi’s Mansion being an example of a series that has received modern releases. However, having a massive model dedicated to it makes 71395 Super Mario 64 Question Mark Block feel even more unique.

The LEGO Group is no stranger to miniature recreations of worlds and locations, but to feature a variety of functions and interactivity within a build that serves as its own display piece helps 71395 Super Mario 64 Question Mark Block stand out from the crowd. That’s as long as you can get past the inaccuracy of the chosen block – which is admitted and explained early in the instructions. We can recommend taking a moment to read through the first pages of the manual too, with thoughtful messages from the designers that call back to their experiences with Super Mario 64.

Make no mistake: 71395 Super Mario 64 Question Mark Block caters to an older audience by directly tying into the classic game, but the simplistic designs for the characters and functionality with the LEGO Mario and Luigi figures help to bring Super Mario 64 into the modern day. It gives it surprisingly broad appeal, and it’s not hard to imagine this making its way into plenty of fans’ homes – for good reason.

Building LEGO Super Mario 71395 Super Mario 64 Question Mark Block should take you around four hours and 30 minutes from start to finish, but taking your time with the experience and appreciating the finer details isn’t a bad idea either. 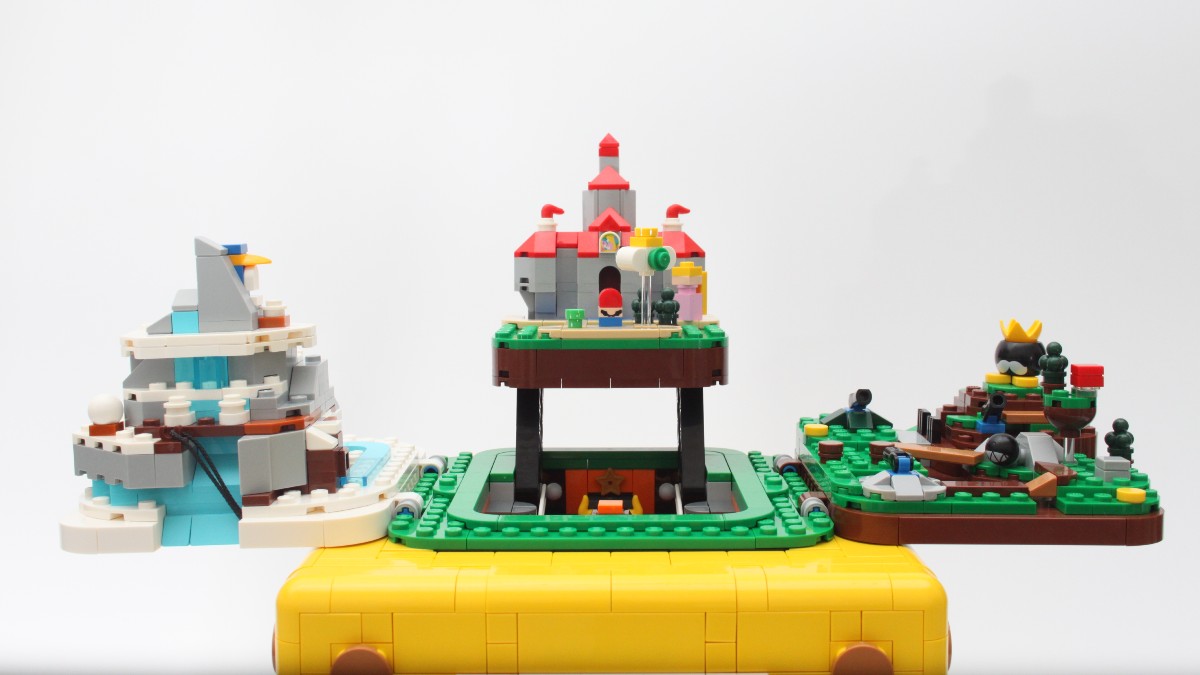