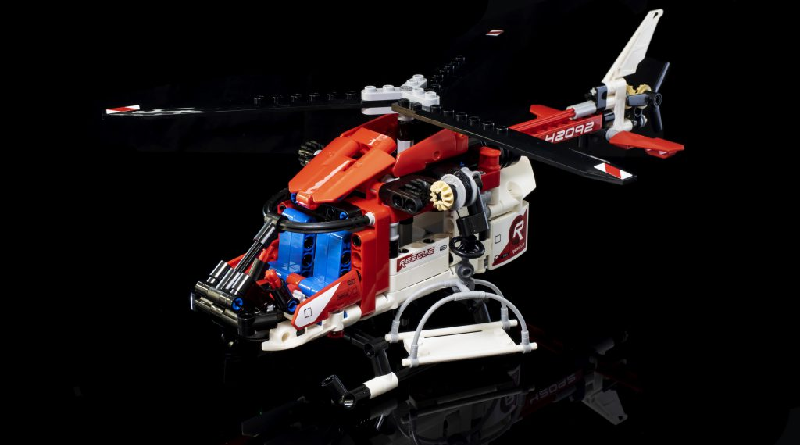 Will the LEGO Group’s latest Technic 42092 Rescue Helicopter be a worthy update since the last version, that was released eight years ago?

LEGO Technic 42092 Rescue Helicopter is an appropriately red and white helicopter, featuring a host of working features. Those functions include working rotor blades, four opening doors, moveable cockpit controls and a working winch with stretcher. It is built from 325 pieces, which is 83 less than 8068 Rescue Helicopter included when it was released in 2011.

Continuing my LEGO Technic education, having built two smaller sets this marks the point I move onto something more substantial. I felt confident to tackle a more complicated set and 42092 Rescue Helicopter felt a good place to start. Let’s find out if I was right about that…

This set contains four unnumbered bags, something which I have learned is common among all Technic sets. Depending on how you first set up for a build it can be quite time consuming, either separating all the parts to begin with or looking for each individual piece as you go. Considering that all other LEGO sets use the numbered bags, I am not sure why that is not the case here.

Right from the start, 42092 Rescue Helicopter is a very enjoyable build. It is a nice process and the set quite quickly starts to feel quite solid in your hands. There are some really interesting parts used throughout too, some of which I personally have never seen before which is always an exciting experience – although remember that I mentioned I am a LEGO Technic beginner, so they will not be new to a seasoned fan of the theme.

The build is split into two main sections, the body and the tail, both of which are pleasing to construct. My favourite part is the way the tail section comes together and links into the gears of the main rotor blades. During the construction of the tail section, you need to align a small build precisely. The distance between the axles and connectors has to be exact but the instructions present a 1:1 example of the exact spacing needed, a very helpful touch indeed.

The mechanics work really nicely and are fairly well integrated within the set. I picked up another Technic building tip while putting the gears together and that’s to leave just a tiny space between the gear and the axle, don’t fit them too tightly, as it will allow for better friction and movement.

I did also learn that accidentally dropping a Technic set half way through a build does not result in the explosion of LEGO parts that usually follows dropping a System set, which is very handy for those of us who are a little clumsy at times.

What I find most pleasing with 42092 Rescue Helicopter, unlike the smaller Technic sets, is that there are more parts used to help fill in some of the “gappier’ areas”. The whole underside of the helicopter is filled in with a mix of light blue grey parts, which aren’t needed structurally and seem to be are used purely for aesthetics. The designers have even gone as far to use a number of trans-clear and coloured pieces to cover up exposed pins on the underside of the helicopter, acting as both lights and a nice overall finish to the model. It helps to make the overall build feel more substantial, something that was lacking from the 2011 iteration. The only thing similar to that previous version is the seats in the cockpit, made from two blue L-shaped lift arms – the rest of the design has been overhauled.

The red and white colour scheme is completely appropriate for a helicopter of this kind. I would have liked to have seen this model in a more striking yellow, or at least red and yellow colour scheme, that some real life rescue helicopters use. LEGO Technic sets in bright colours really pop and look excellent on display. There are additional stickers used to finish off the look of the set and I particularly like the sticker which uses the set number, 42092, on the tail section. It is a nice touch.

The additional stretcher that comes with the set is a simple little build but one I really admire. It just looks really effective and adds a great play feature to the set.

Looking at the play features, the blades are turned by a gear, which can be found underneath the body of the helicopter. Turning this turns both the main blades and the tail blades together. The winch is controlled by a gear on the side. Both work really nicely and the blades have a really smooth motion to them.

When I first started this series of reviews, I was incredibly daunted by the prospect of building nine LEGO Technic sets having never built a single set before. One third of the way through the builds, and I am enjoying this process more and more. LEGO Technic sets offer a build experience quite unlike anything else yet still retain those magic ingredients that make all LEGO sets such a satisfying toy to construct.

Overall this set is an improvement over 2011’s 8068 Rescue Helicopter. It may be slightly smaller in both size and piece count, but the finished look is more complete. Some great play features and a sleek design makes this a decent model for both play and display.

42092 Rescue Helicopter is available now at shop.lego.com. You can help support Brick Fanatics’ work by using our affiliate links.