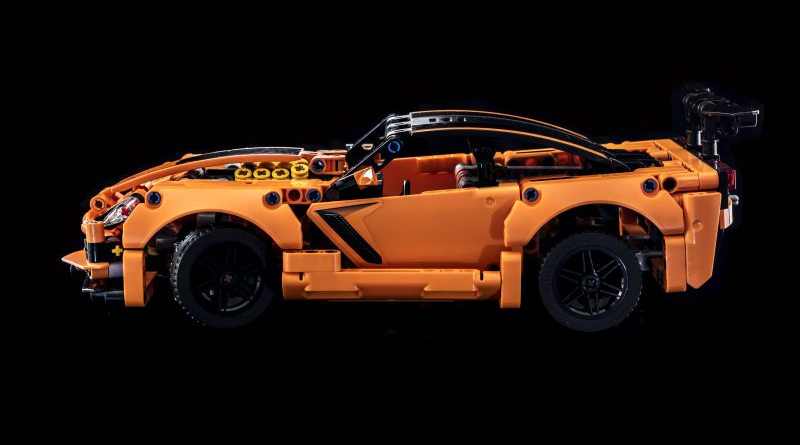 Billed as the “‘vette to beat all ‘vettes”, Chevrolet’s Corvette ZR1 is the most powerful, fastest and advanced production car they’ve ever produced – does LEGO Technic 42093 live up to the reputation of its real life inspiration?

In this latest wave of Technic sets there are two supercars for fans to enjoy, 42096 Porsche 911 RSR and 42093 Chevrolet Corvette ZR1, with the latter being the smaller, cheaper and more accessible of the two. The set contains 579 parts, which go together to form a sleek orange and black replica of the Corvette ZR1. Play features include working steering and a detailed V8 engine with visible moving parts.

This set marks the first time that the LEGO Group has recreated a Corvette in Technic form – in fact only one other LEGO Corvette exists, 75870 Chevrolet Corvette Z06. This set has been developed in partnership with Chevrolet, and a real love for the supercar is evident throughout all aspects of this set. 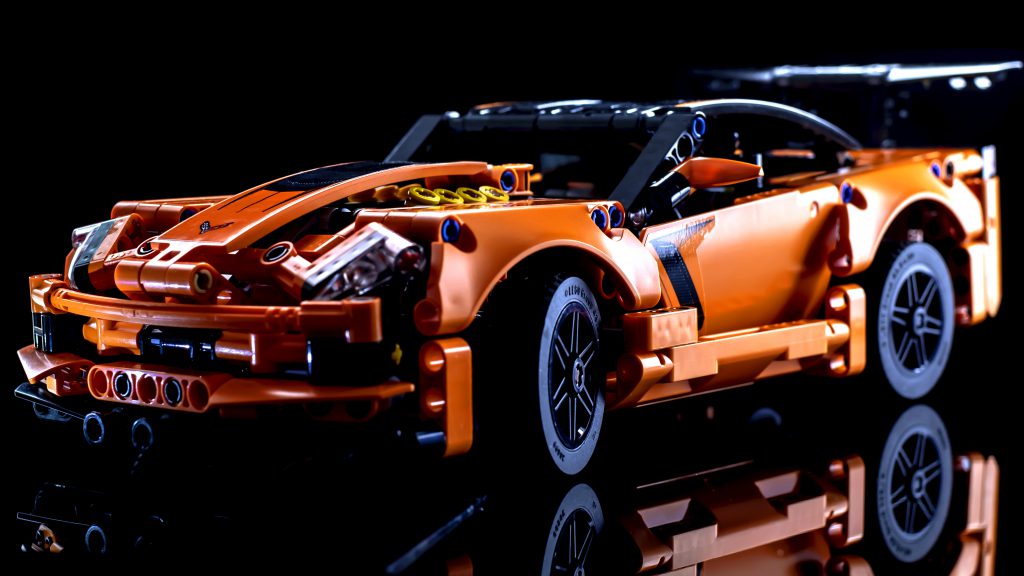 I have now worked my way through three LEGO Technic sets from this latest wave and I feel confident enough to shed the “Technic noob” label I was wearing just a short while ago and grant myself the title of “Technic Apprentice”. With that in mind I wanted to take my growing Technic skills and apply them to a set with some real substance. The hefty instruction manual certainly suggests this will be a more complex build than the previous sets I have put together.

The box art for 42093 Chevrolet Corvette ZR1 captures the speed and thrill of a supercar, showing the ‘vette speeding along a coastal road of an unnamed US city. On the reverse there are detailed images of the LEGO set plus a beautiful shot of the real life ZR1 with some stats showing just how powerful this car really is.

Straight away you are tasked with building a fairly complex gear system. I’m glad I learned not to fully tighten the gears to the axles in the smaller sets, as having to undo some of this work would have been a painstaking undertaking. The first steps prove to be an incredibly enjoyable experience and it’s very pleasing to connect all the gears and watch how they operate. It’s brilliantly educational and entertaining at the same time – for those new to Technic sets, I’m sure you’ll love learning all these new building techniques and styles.

After spending some time working on the interior frame work and mechanics, the Corvette finally starts to take on its recognisable form and it is a really pleasing moment. It feels like all the hard work you have put in early on in the process is starts to pay off.

42093 Chevrolet Corvette ZR1 is by no means a simple build but it is incredibly rewarding. There are some really clever parts used throughout, such as the engine, headlamps and the dark blue grey seats, which despite being used for doors in other sets look exactly like racing seats. The regular LEGO System parts that are integrated into the back of the set work really well, adding to the overall shaping and finished look of the set.

The body work is an absolute joy to construct, I loved the building process that went into the roof and windscreen section. It then connects in a very satisfying way. The wheel arches are one of the final pieces to go on and once they do it completes the look perfectly. The shaping of this model is pretty good and from certain angles it captures the sleek yet muscular look of its real life counterpart. Unusually, the view from the back is particularly spectacular and looks very accurate.

Viewing 42093 Chevrolet Corvette ZR1 from the side, it is clear that the LEGO designers have also managed to incorporate the raised bonnet that is present in the actual car. The only angle that does not quite work for me is front on, it just looks slightly too blocky – but considering the parts available, it is as good a job as possible. Unlike some of the other models in this series it doesn’t suffer from too many unwanted gaps except for perhaps underneath the rear wheel arches.

The play features include a replica V8 engine, made of four bushes on each side that move up and down when the car is pushed forward. Front wheel steering is controlled by a gear at the back of the car. When pushing the car along from behind it is surprisingly easy to steer and push at the same time.

The orange and black colour scheme is a perfect choice for this set as it’s both accurate and striking. There is an all black ZR1 in production and I think this could have been a great alternative, but this colour choice helps the model stand out when on display.

There are a lot of stickers that accompany this set and I’m definitely not the biggest fan of them, although it makes sense why they are used to keep prices down. I would have liked to have seen the 2×3 ZR1 Corvette logo as a printed piece rather than a sticker though.

I really had a blast building this set, right from the first step to the last. The final model looks fantastic, sleek and is a great representation of one the world’s finest supercars. It is also one of the most photogenic sets I have had the pleasure to shoot this year.

For seasoned builders, there is a lot of enjoyment to be had with this set and for younger builders it will be on the right side of challenging as well as being an amazing introduction into the world of engineering. It is a great piece to have on display and with a fairly modest price tag this set comes highly recommended.

42093 Chevrolet Corvette ZR1 is available now at shop.lego.com. You can help support Brick Fanatics’ work by using our affiliate links.