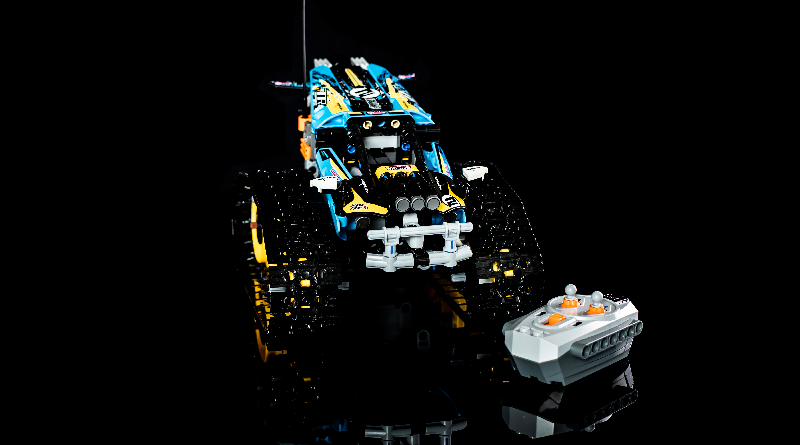 Only last year, fans of LEGO Technic were introduced to remote control sets. Will 42095 Remote Control Stunt Racer offer something more than a traditional Technic car?

42095 Remote Control Stunt Racer is the only remote controlled vehicle available in this current wave of LEGO Technic sets. It is presented in vibrant blue and yellow, features large tracks and has full forward, reverse and 360 degree turning capabilities controlled by a remote control, the joysticks on which are brick built.

When I first started this series of reviews there was one set that had me intrigued more than any other. I don’t think I have ever built my own remote controlled vehicle, let alone one made of LEGO elements, so if nothing else this was going to be a unique experience.

The set comes in a large box with dramatic art showing the Stunt Racer in action. It both feels and looks like a weighty set so I was somewhat surprised to find only four bags inside, one of which one contains fairly large parts. My initial feelings were of slight disappointment, realising that this wasn’t going to be as complex a build as I was hoping for.

The initial build has you constructing the frame work for the motor, which both the front sprockets and hefty rear sprockets connect to. As a newcomer to building LEGO remote controlled vehicles it was quite an enjoyable process and I liked the fact that regular 1×2 grill pieces in red and blue are used to indicate the positive and negative connections on the motor. Once the novelty wore off, I have to admit I was left feeling a little flat.

Due to the large size of the motors there really is not that much skill needed or complexity within the build so it quickly becomes quite a perfunctory procedure. That being said, the experience does start to improve when adding the body work, with the pieces creating a sloped and angular looking model. Unlike a few of the other Technic sets in this wave, it looks good from both the front and side views.

The motor integrates really well within the model. A large sticker helps to further enhance this, and the wires can be tucked away quite neatly. In fact all of the LEGO Power Functions parts included within the set look completely in keeping with the bulky nature of the model and do not detract or look out of place at all.

There are some nice touches in 42095 Remote Control Stunt Racer. The front grill looks excellent and the use of a minifigure fishing pole to replicate an RC antenna is inspired. I really like the hose parts used for the windscreen section, which in this context looks authentic, and the three silver metallic 1×1 round tiles used for headlights catch the light, adding some real dynamism.

One important aspect of this set that I have to mention is there are a lot of stickers. At one stage in the build almost every other step involves applying a sticker of some sort. During one step, there are four stickers just for one part. I did not enjoy this process at all, however if you love stickers then you will be in your element. Once applied I have to admit they do look very cool and really add to the finished look.

Of the 324 pieces included within 42095 Remote Control Stunt Racer, 60 of them are separate track pieces, 30 on each side. They are big, bulky and very robust. The finished model looks like a hybrid monster truck and I am not sure if this is based on any real life vehicle, but the more I look at it the more I like it.

This is not a set that people buy for display purposes – it really is all about the radio controlled element and I am pleased to report it is an excellent feature. The magic of creating a fully functional remote control stunt vehicle from a collection of random LEGO pieces certainly hasn’t been lost on me. I even love the fact the joystick controls are made of Technic elements.

It is fast, feels weighty, handles really well and after some practice you can start to pull off some nifty maneuvers. It is worth noting that this is an utter battery consuming beast, requiring three AAA batteries and a whopping six AA batteries. Changing the batteries is not a problem though as the LEGO designers have made it incredibly easy to remove sections of the body work for access to the motor functions.

I do feel that this is an improvement over last year’s remote control set. It certainly feels heavier, meaner and more substantial and the blue and yellow colour scheme looks more dramatic. If you really prefer the look of 42065 RC Tracked Racer then fear not, this model has online instructions for an alternative build that bears more than a passing resemblance to that model.

It is an awesome feeling once the build is complete and you utilise the set to its full capabilities, but getting there is not the most enjoyable LEGO Technic experience. Younger fans will absolutely relish the remote control features but older fans might want to look elsewhere for complete satisfaction.