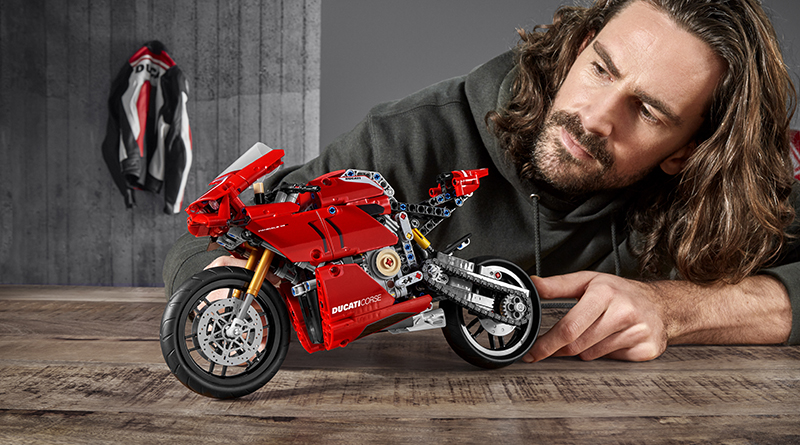 The LEGO Group has revealed LEGO Technic 42107 Ducati Panigale V4 R, the latest set to be announced for the advanced theme.

Just yesterday, the LEGO Group announced LEGO Star Wars 75275 A-wing Starfighter. Today sees another new set announced, with LEGO Technic 42107 Ducati Panigale V4 R due to launch on June 1. It will follow the release of LEGO Technic 42111 Dom’s Dodge Charger on April 27. The new set uses 646 elements and will be priced at $59.99.

42107 Ducati Panigale V4 R is a scaled down model of the iconic Italian motorcycle, with the set designed through a collaboration between the LEGO Technic and Ducati design experts. The set features the two-speed gearbox, that actually activates the V4-cylinder engine. A kickstand will allow the build to sit on display.

It is the first in the history of LEGO Technic that a motorcycle features a gearbox that allows fans to navigate through different speeds. The model also includes realistic steering, suspension, front and rear disc brakes, an exhaust pipe, a windshield and a dashboard.

“The Ducati Panigale V4 R is such an elegant Italian icon and a true technological masterpiece,” says Aurélien Rouffiange, Senior Designer at LEGO Technic. “It was essential that I included as many authentic details from the real motorbike as I could when designing the new LEGO Technic version, ensuring I captured all the bike’s curves and the unique features. Just as Ducati continually pushes boundaries in its design, we demonstrated what the LEGO Technic range is capable of by engineering a fully functioning motorcycle gearbox for the first time and connecting it to the spinning V4 cylinder engine using existing pieces.”

“We have all been kids passionate about LEGO bricks and I think it is easy to understand that this new licensing agreement between Ducati and the LEGO Group is like a dream come true. We are two brands that share the same values of dedication, passion and attention to detail – values that have come together to give life to a unique building experience” says Alessandro Cicognani, Ducati Licensing Director. “Our hope is that the Ducati Panigale V4 R LEGO Technic can bring together, excite and entertain not only children and parents, but also all the fans who ride their motorcycles every day.”

LEGO Technic 42107 Ducati Panigale V4 R will be available from LEGO.com on June 1.