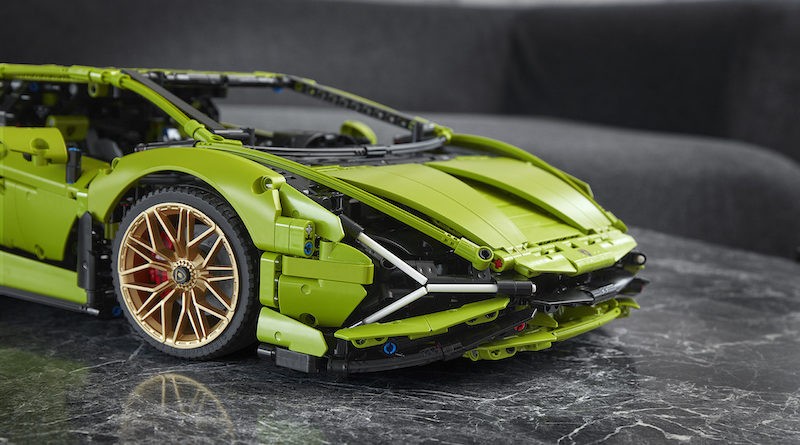 The Italian automotive manufacturer only presented the real-world version of the Sián in September 2019, but on from another social media campaign of teases, today the LEGO Group has confirmed that it is the latest supercar to get the Technic treatment.

Named after the Italian Bolognese dialect Sián, which means a flash of lightning, the car is noteworthy for being the first hybrid vehicle ever produced by Lamborghini. The Sián takes design inspiration from previous models across Lamborghini’s 57-year history, including in the shaping made famous by Marcello Gandini’s original wedge design bodywork and concepts explored more recently through the £100m partnership with Massachusetts Institute of Technology (MIT) that created 2017’s electric concept car, the Terzo Millennio.

Lamborghini are producing only 63 units of the real world Sián, in tribute to the company’s year of formation, and they have all already been sold. However, expect the LEGO Group to produce a few more units of 42115 Lamborghini Sián FKP 37 than that, and for them to be a little more widely available.

Today, the LEGO Group and Automobili Lamborghini unveiled the eagerly awaited LEGO® Technic™ Lamborghini Sián FKP 37 in true style. The showstopping reveal featured all the suspense, emotion and excitement of a supercar launch event – but was miniature in scale and powered entirely by LEGO Technic elements.

The star of the show, 1:8 scale LEGO Technic Lamborghini Sián FKP 37 embodies the unrivalled power, visionary design and futuristic elegance of the limited-edition Italian super sports car. First presented at Frankfurt Motor Show in September 2019, only 63 of the full-sized Lamborghini Sián FKP 37 models are being produced, making this 3,696-piece replica the ultimate collector’s item for luxury car lovers and LEGO fans looking for their next building challenge.

Boasting a vivid lime-green colour and elegant golden rims, the model measures over 5” (13cm) high, 23” (60cm) long and 9” (25cm) wide. This one-of-a-kind model is the ultimate addition to any LEGO collection.

The LEGO Technic Lamborghini Sián FKP 37 will be available directly from LEGO stores* and www.LEGO.com/Technic-Lamborghini-Sian from June 1st, then in many retailers globally from August 1, 2020.