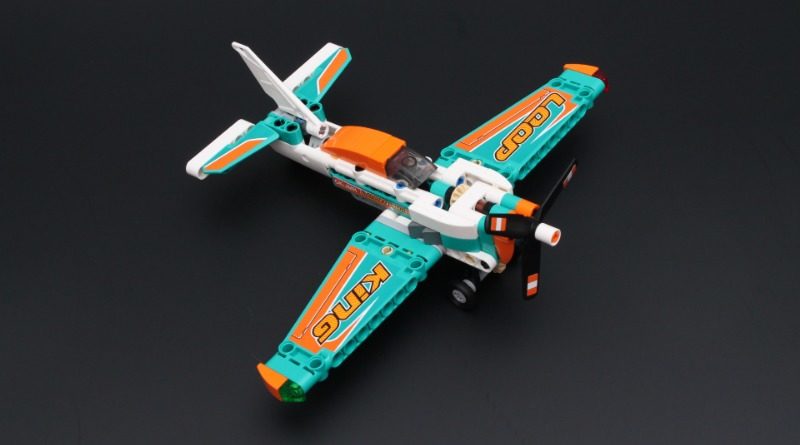 Aircraft have long been a staple feature of the Technic theme, appearing at all sizes and scales. The January 2021 wave brings us another example at the smaller end of the scale in 42117 Race Plane, a striking white and teal plane with a propeller driven by the forward landing gear.

The build is quite interesting as mini Technic sets go. The base of the plane begins with laying down the usual assortment of liftarms, pins and axles, and goes on to add some compact structural elements to achieve some nice shaping in a very small model. A simple gear train is built using one of the newer ‘biscuit’ elements, which transfers power from the forward landing gear to the propeller.

Care must be taken here not to over-tighten the wheels; the slightest bit of friction can stop the mechanism working smoothly. The build is finished with the addition of quite a few System bricks for added detailing and shaping, notably for the cockpit and the engine vents.

The completed model is a very sleek and solid-looking plane that’s also surprisingly big for its scale, with a full wingspan of 29 studs. The combination of white, orange and the unusual colour of teal works excellently here, and is accented well by effective use of stickers. Decals are perhaps inevitable in any Technic set, but they’re used well and for the most part are straightforward to apply.

The exception to that are the three tiny stickers used on the propeller, which are horrible to line up. It’s unfortunate, as they do add a nice finishing touch to the blades. The use of System parts is a great decision, adding tiny detailing that would otherwise have been impossible with Technic elements, and would otherwise probably have been achieved with stickers.

There’s just one function in this model: the propeller is driven by the front landing gear (which is fixed in place and cannot be retracted). As you push the plane along the ground, the propellor rotates. While this is pretty fun to operate, it becomes useless once the plane actually takes flight. There is no easy way to turn the propeller through any kind of mechanism once in the air; turning the wheels to do so is just awkward, and the propeller can’t spin freely because of the gear train connected to it.

Minifigures? In a Technic set? There’s no room for their kind here.

This is an excellent looking model for its size and part count. It’s a little bit of a shame that its sole function isn’t too viable when actually airborne, but it’s a nicely designed set on the whole and aircraft fans will find it a very enjoyable mini build.

42117 Race Plane launches on January 1, 2021. You can support the work of Brick Fanatics by ordering your copy using any one of our affiliate links.