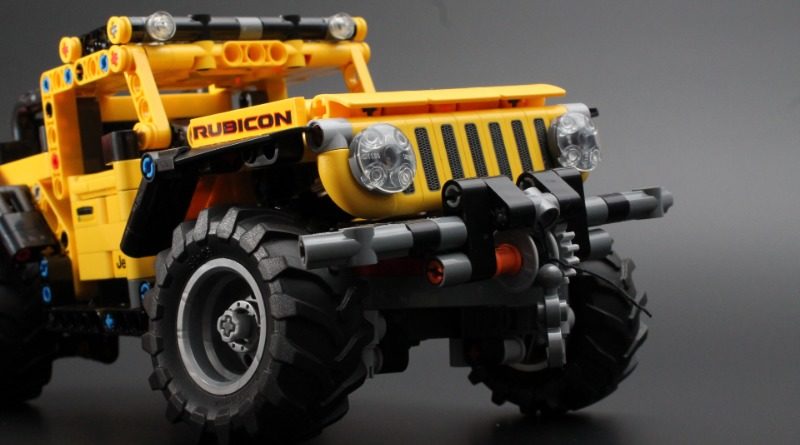 LEGO Technic 42122 Jeep Wrangler tackles an off-road vehicle at a lower price point than the source material might have deserved – so can it pack in enough to win over Technic fans?

The last few years have seen the LEGO Group introduce more and more licensed cars to the Technic line-up, and the January 2021 wave is no different. As well as 42122 Jeep Wrangler, there’s the similarly-sized 42123 McLaren Senna GTR, and the larger 42125 Ferrari 488 GTE AF CORSE #51. Across 665 parts, the Jeep Wrangler offers fans a rugged, mid-sized off-roader, with working steering, suspension, and a front-mounted winch.

The LEGO Group’s box art for Technic sets has become increasingly more sophisticated and the Jeep continues that trend, with its eye-catching yellow bodywork standing out against a mountainous backdrop that really helps show off the vehicle. The back demonstrates the model’s functionality, along with a specification box that depicts the real thing. As is to be expected with licensed sets, there’s no B-model.

The box contains five bags, the instruction manual, a small sticker sheet, and five new tyres, which have a very similar design to the large tractor tyres that were introduced with 42054 CLAAS Xerion – albeit at a much smaller scale.

Other new parts include a 3×7 flat panel – appearing in both yellow and black – and a new 2×3 curved panel, used to great effect for the Jeep’s hood. It’s also worth pointing out that the parts used for the iconic front grille are, mercifully, printed elements. It’s a nice touch that removes the need to align what would have proven to be a nightmarish set of stickers.

The build begins with assembling a strong core for the chassis, using some interesting techniques to achieve a rigid structure that will support the entire vehicle. It progresses quickly, moving on to building sub-assemblies for the front and rear axles that are then connected to the rest of the chassis through mini turntables.

There are some really fun little builds in this set that demonstrate clever ways to fit functions into a smaller model. The rear suspension, with a solid axle connected to a pair of shock absorbers, is especially satisfying to see in action. As one side of the axle is elevated, the shock absorber on that side compresses, while the top mounting point for the opposite shock absorber rotates away from it.

The first set of bags complete the main chassis, with the winch and front grille. The second set of bags then contain all the parts needed to finish the bodywork. This part of the build feels much quicker, with a little necessary repetition to mirror the bodywork from side to side. While there isn’t anything too complex here, there are still some neat little tricks used, such as the way the mounts are angled upwards for the windscreen pillars. Small details like this help to make building the Jeep a really satisfying experience. Once the bodywork is finished, the wheels and tyres are added – including the spare mounted on the rear – and the Jeep is complete.

At a glance, the finished Jeep looks excellent. The boxy style of the Wrangler lends itself well to Technic, with the shaping of the bodywork easily achieved without needing too many specialised parts. The new panels help to round off the front of the hood to great effect, and combine well with the slight angle of the grille to achieve a smooth flow to the front of the vehicle.

Stickers are used sparingly throughout for small details – such as door handles and the dashboard – and the choice to use printed elements for the grille, rather than stickers or a brick-built alternative, feels wise. Probably one of the best aesthetic choices in the whole model, though, is the introduction of a new tyre. They help to elevate the whole model and give it an authentic off-road appearance.

It’s not perfect, though, and looking closer reveals a few flaws in the Wrangler’s appearance. Most notably, if the Jeep is posed in the same angle as on the box, you won’t see a dark area behind the front wheels. Instead, you’ll see clear through to the other side of the vehicle, as there’s nothing in the engine bay aside from a decorative panel.

There are also notable gaps underneath the doors that could easily have been fixed with a few more parts, and are quite obvious when compared to images of the real vehicle included in the instructions. Multi-coloured parts are often used by LEGO designers to guide builders, and it’s a helpful technique here too. But unlike bigger sets, these parts aren’t so successfully hidden, and can be seen in the completed model.

The Wrangler’s functions are a lot of fun to play around with. The front axle is steered, controlled by a gear mounted between the front and rear seats; both axles have some form of suspension; and there’s a functioning winch attached to the front bumper. The rear suspension is by far the most interesting aspect of this set, with an innovative method of connecting shock absorbers to a solid axle.

It’s a shame that the front axle doesn’t also use this system, and instead is merely pendular. Because there’s no engine in the engine bay, it feels like there would have been plenty of room to add shock absorbers. There are also suspension limiters in place on both axles, as the chunky tyres would otherwise easily hit the wheel arches

The steering is achieved through the use of a connector, which pushes the wheels side to side as it is rotated. It’s simple, but compact and effective. Its design also naturally limits how far the wheels can be turned, which stops them from clashing with the bodywork when the suspension is pushed to its extremes.

The front winch is a nice touch, and adds an extra layer of playability. There are no fiddly ratchets to adjust either; it’s connected directly to a friction pin, and operates smoothly by turning the grey gear mounted next to it (which isn’t connected to anything). Again, though, the empty space in the engine bay pops out as somewhere a control could have been placed for this.

This is a Technic set, and in true Technic fashion, there are no minifigures in this set. They’re not what you’re here for.

This is a very satisfying recreation of a Jeep Wrangler in a scale that won’t break the bank. It’s a lot of fun to play around with and looks excellent on display too, and is a great starting point for those looking to dip into the Technic theme for the first time. While there are a few shortcomings where a little more attention to detail would have been welcome, overall this is a set that’s easy to recommend.

Get in gear and support the work that Brick Fanatics does by purchasing your LEGO Technic sets through one of our affiliate links.