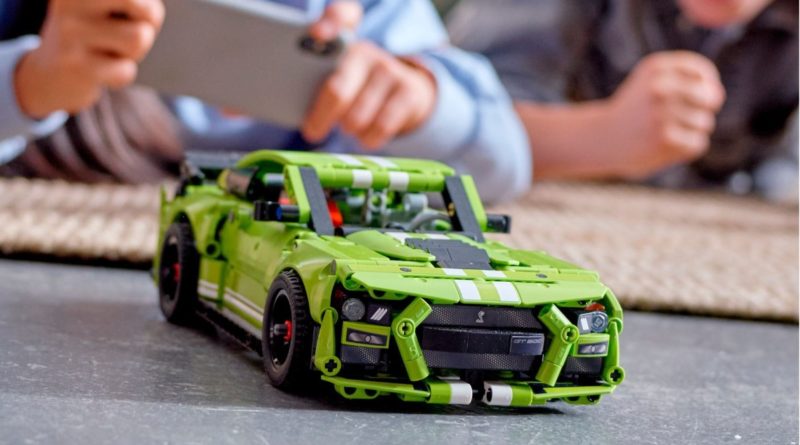 Two of January’s LEGO Technic sets include a bonus augmented-reality experience, and we’ve been testing it out – but it’s pretty lacklustre.

I recently reviewed two new LEGO Technic sets, 42137 Formula E Porsche 99X Electric and 42138 Ford Mustang Shelby GT500. Both come equipped with two pull-back motors and a ‘release’ mechanism that you can operate by hand or, judging by the diagram in the instruction booklet, your foot.

Both these models have an ‘augmented-reality experience’, but it was difficult to tell what that would involve as I couldn’t get my hands on it when I reviewed them. Now I have – so was it worth the wait?

To be honest: not really.

It’s still in the beta testing phase, so I was first directed to download an app called Testflight, which then allowed me to download the TechnicAR app. To run Testflight (which won’t be required when the app goes live) I needed iOS 13.0. Despite my aged iPhone being on iOS 15.1, while the AR app would install and launch, it crashed every time I tried to use it. Fortunately I had more luck with my iPad. So, what does the app give us?

At launch, you choose your model, which is currently limited to the Porsche and the Mustang. The Porsche gives us the option of a battery-charging mini game and a circuit race, while the Mustang has either an arcade drag race or a tournament drag race, the latter of which is only accessible once the arcade tutorial has been completed. I tried the Mustang first.

First you wave your phone around (after granting camera access) to set a race course. Eight feet across my living room carpet seemed fine, given that the car won’t travel further than that, even fully wound. You set a start and finish line and then off you go!

In the world of quarter-mile drag racing, it’s vital to have heat in your tyres, so to start with, you point the camera at the car and see a representation of a throttle pedal and a rev counter. You have about five seconds in which to keep the needle in the green zone. As you’re doing this, virtual smoke billows from the model’s rear tyres and the engine roars, assuming you have the volume turned up.

Then it’s race time, and it now becomes obvious why you might need to launch the car with your foot, as you have to be standing up to give the camera a chance of seeing the start and finish line. There’s a countdown, and the closer you can launch the car to the green light, the bigger time bonus you get.

Here’s where the first of the problems appears. My size-10 feet don’t have the same degree of control as, say, the hands of a surgeon. More like the hands of the Hulk when he’s in a particularly smash-y mood. So time and again, the counter would tick down, I’d try to launch the car and nothing would happen because I’d pressed the lever too hard. Eventually I managed it, after much cursing, and I won the race, which opened up tournament mode.

Tournament mode consists of three races, and each set of three can be played out over three different tracks in the USA.

Reader, I did not have the patience to complete them. There were many, many foot-operated failed starts. It’s possible you’d have more success if one person was holding the device and one person was launching the car by hand, but willing assistants were in short supply, so I wasn’t able to test that theory.

On the upside, the AR does (occasionally) populate your living room with trackside buildings, trees, rocks and so forth. It’s neat when it works, but it’s only about 50% of the time.

I then tried the Porsche. The battery-charging game is all about trying to stop the car in the optimum zone as displayed on your device, a bit like shove ha’penny for our readers of a certain vintage. However, the 100% zone is about 10 inches from the start zone, so anything more than a few clicks on the motor and you’ll end up flying past. I managed a lot of 25% charges and on one glorious occasion, a 50%, but that’s as good as it got.

So then I tried the circuit race. This bears a remarkable resemblance to the drag race, except the race is in six segments, and you have to complete each one before moving on. The first is a straight line. So far, so easy. The second is a bend. Not a diagonal line. A bend. You can see it on your carpet – it stretches down the living room and then takes a sharp turn round the table.

Bear in mind that this is a car with no steering…

On top of that, you’ll occasionally get a ‘fanboost’ appearing on the track, which gives you bonus seconds if you hit it. The Mustang has something similar with boosts to hit and oil spills to avoid. So when they appear, you go back, kneel down to adjust the angle of the car so you’ll hopefully collect the boost, at which point the app complains that it can’t see the track and/or the car, and you have to start the segment again. For a five minute game, it takes a long, long time.

All of which sounds very critical, and I’m afraid to say that’s about the size of it. To be fair to the LEGO Group, the app is still in beta and it didn’t have to include it in the first place, but it feels to me like an attempt to ‘add value/justify an extra fiver on the set price’ that doesn’t really come off.

Youngsters may try it a few times, but most are likely to lose interest fairly quickly. Many parents will wonder why their child needs an expensive phone to play with a LEGO toy when one of the greatest selling points for Billund’s finest is that it gets children (and adults) away from the screen for a while.

The only other things included with the app are two short films: a 30-second clip entitled ‘What is drag racing?’ for 42138 Ford Mustang Shelby GT500 and a 90-second promotional film for Formula E with 42137 Formula E Porsche 99X Electric.

First iterations always suffer from teething troubles – it may be that in future, the app becomes more of a plus point for sets like this, but at the moment we’d have to say it’s a novelty that loses its appeal very quickly.