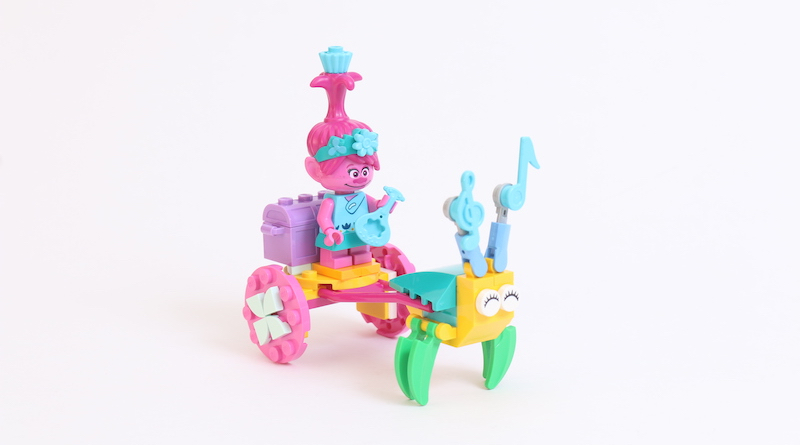 30555 Poppy’s Carriage could be a perfect taste of LEGO Trolls World Tour for those unsure. It’s not, but, as a gift with purchase it still ticks all the right boxes

What does the LEGO Trolls World Tour theme represent to LEGO fans? A junior range akin to the current 4+ line bridging the gap between DUPLO and the first years venturing into System LEGO? A large assortment of interesting pieces new and recoloured? A one-and-done film license for the LEGO Group soon to be forgot?

Most likely, LEGO Trolls falls into a mixture of the above, but, for such a position that it takes within the current product line available on shelves and online, it’s not something that will necessarily be sneered at or overlooked by some of the more experienced LEGO fans. It will certainly polarise opinion for the colour palette that it uses and the pieces that it introduces (sometimes a recoloured piece is just nice to look at but hard to build with), but for as many sceptical fans who will avoid it will be as many drawn in by its unique appearance and product range.

It is somewhat unfortunate, then, that 30555 Poppy’s Carriage won’t be doing anything but furthering whatever opinion you may already have about LEGO Trolls. Where it could have served as a quick and free entry point into the unusual, technicolour brick-built world for those buying other products at LEGO.com and otherwise hesitant about it, this gift with purchase won’t be. Instead, the polybag is available at LEGO.com from April 6 to 19 (or while stocks last) with qualifying £30 or $35 purchases from the LEGO Trolls product line only.

If you’re already interested enough to buy a LEGO Trolls set, this will come as a cute and fun additional build. If you’re steering clear of LEGO Trolls when purchasing on LEGO.com you’ll not receive this, and so won’t get what could otherwise be a first, revealing taste of something really very different.

That’s the only downside to 30555 Poppy’s Carriage, as it is otherwise a solid polybag offering a good mix of pieces in interesting colours, one of the lead characters from the new film and something that as a LEGO set is definitely not the same as anything else you may already have.

For LEGO Trolls fans, now’s the time to pick up something from the range – we have our eye on 41256 Rainbow Caterbus – and for everyone who won’t even consider looking at LEGO Trolls, you’re probably not reading this, so, never mind.

Thank you to the LEGO Group for providing this polybag for review purposes.

If you are purchasing LEGO during this unique time, please do so through the affiliate links we have posted throughout this feature – it really helps to support the work that we are doing at Brick Fanatics. Thank you.