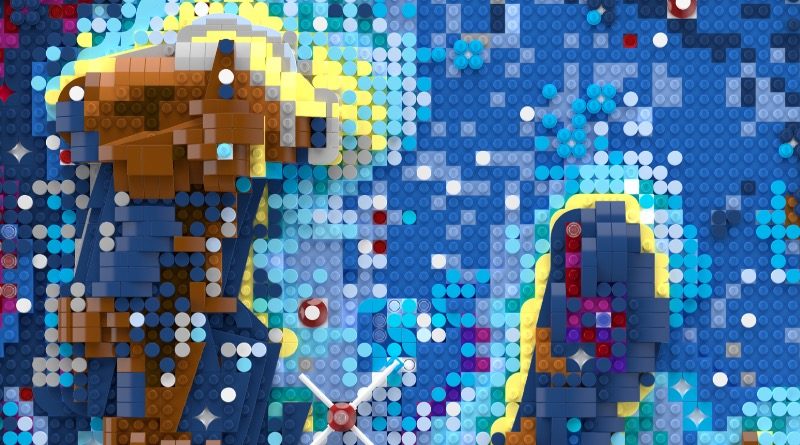 The artwork is part of the company’s Go Beyond space campaign to promote 10283 NASA Space Shuttle Discovery, which is based on the STS-31 mission that first launched the Hubble Space Telescope into the cosmos in 1990.

In the years since, the scientific instrument has captured more than a million incredible and awe-inspiring images of deep space, including several of the Eagle Nebula’s ‘Pillars of Creation’. Those towering, twisting spires were the inspiration for the LEGO Group’s promotional artwork, which departs from its own LEGO Art theme by using three-dimensional displays.

Each of the three bas-relief sculptures measures 20×20”, and will be installed in 168 different LEGO Stores around the world – including all 18 stores across England, Scotland and Wales. You’ll be able to check them out in person from April 18, or when the Glasgow and Edinburgh stores reopen on April 26.

“There are so many spectacular images that the Hubble Space Telescope has been able to capture over the years,” said former astronaut Dr. Kathy Sullivan, who has been actively involved in the launch of 10283 NASA Space Shuttle Discovery.

“Some of my favourites include the Ultra Deep Field, which looked at a small patch of sky and found endless galaxies; The Light Echo, which captures the reverberation of light through space caused by the outburst of a star; and Pillars of Creation, as it looks at a region where stars are being born. What the telescope has been able to capture over the years is truly extraordinary.”

If you’d like to put these striking brick-built images together using your own LEGO parts collection, you can download the instructions for them through the Go Beyond campaign page.