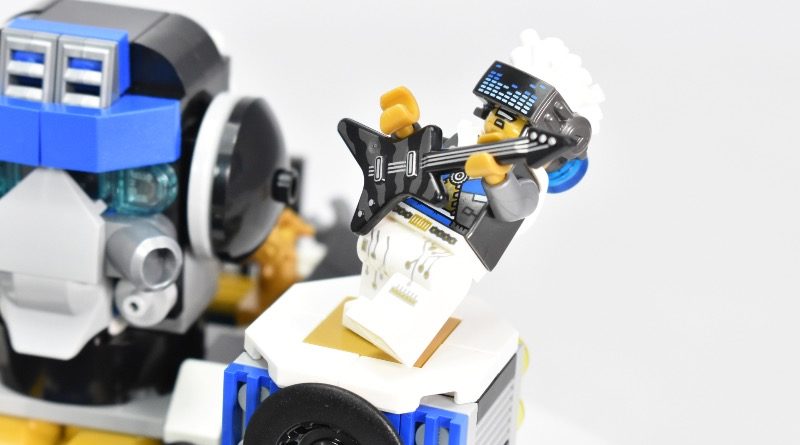 LEGO VIDIYO shifts into gear for its second wave of sets with 43112 Robo HipHop Car, a lowrider driven forward by a couple of killer minifigures.

Following a less-than-ideal initial launch of the theme, LEGO VIDIYO is back in a slightly refreshed way. Instead of just simple BeatBox sets and Bandmates, which met with a large amount of criticism, we have now been introduced to colourful, neon, comprehensive builds themed around stages and music.

43112 Robo HipHop Car provides an unusual early twist on that concept by placing its stage on wheels. But can it drive the VIDIYO theme back into our good books?

The new batch of LEGO VIDIYO sets are undeniably eye-catching and colourful, but 43112 Robo HipHop Car is much more sparing when it comes to the neon pinks and blues, making this set far less obtrusive than its counterparts.

In fact, when displayed side by side with many of the other new LEGO VIDIYO sets, this actually looks slightly out of place given its lack of bright neon tiles covering the surfaces of the model. That doesn’t mean that this build is mundane, however, as there are more than enough different colours to keep things interesting aesthetically.

The building process is simple and easy to follow across the three separate numbered bags, all of which take a little over 10 minutes to complete, bringing the construction time of this build to around 40 minutes in total. Thankfully, VIDIYO’s trend of eschewing stickers continues with 43112 Robo HipHop Car – but only a couple of printed pieces are present, and the model would have benefited greatly from more printed details.

Located behind the oversized robot head and at the back of the lowrider is a drinks area, which is complete with golden cups and golden taps to match. This section of the build comes across as a bit of an afterthought, as it feels a little too small and is barely able to fit a single minifigure.

There’s also a BeatBox-style base for showcasing the minifigures and the included BeatBits, but it doesn’t feel hugely relevant. (In fact, its main effect given the price of 43112 Robo HipHop Car is simply to make the regular BeatBox sets seem even worse value.)

A total of two minifigures are included in 43112 Robo HipHop Car, both sharing the same name, Bot. These minifigures are undoubtedly the highlight of this set, which seems to be a recurring theme with the LEGO VIDIYO sets. Both minifigures have great printing from head to toe, and each come with accessories, including a printed boombox and guitar.

43112 Robo HipHop Car is priced at £24.99 / $29.99 / €29.99 and contains 387 pieces. That seems like a fair ask for what you get, particularly given the build is of similar dimensions to other LEGO sets at this price point, and you’re also getting two high-quality, exclusive minifigures.

43112 Robo HipHop Car is undoubtedly the tamest of the latest wave of LEGO VIDIYO sets, with no neon pink or blue in sight. But while the augmented-reality theme has moved into actual build territory, it’s still the minifigures that prove the highlight across most of its sets – and the same is true here.

That really just speaks to how great those characters are more than anything, because the finished model here is pretty fun too. The construction process for the car is generally straightforward, and would have benefited from more detail, but it’s not bad given the price and piece count. And if you’re just dipping your toes into VIDIYO’s larger builds, this is a comparatively cheap way to do so.

Please consider supporting Brick Fanatics by purchasing your LEGO through our affiliate links.

How long does it take to build LEGO VIDIYO 43112 Robo HipHop Car?

43112 Robo HipHop Car takes around 40 minutes to complete. An experienced builder could most likely complete construction within 30 minutes.

How many pieces are in LEGO VIDIYO 43112 Robo HipHop Car?

43112 Robo HipHop Car includes a total of 387 pieces, as well as two new minifigures. The pieces are split between three separate bags and form a fairly simple build.

43112 Robo HipHop Car measures 8cm in height, 18cm long and 12cm wide. The large width is thanks to a speaker strategically placed over the edges of each side of the lowrider.

How much does LEGO VIDIYO 43112 Robo HipHop Car cost?