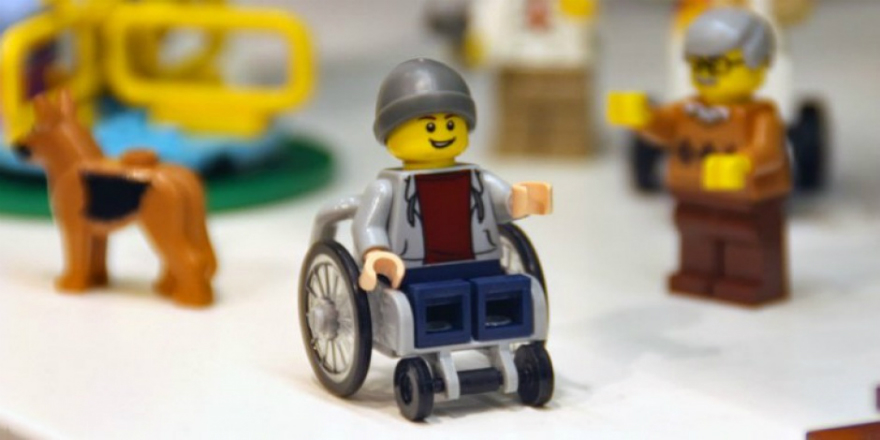 One of the main talking points coming out of the toy fairs is the new LEGO minifigure in a wheelchair. Groups and campaigns have been pushing LEGO and other toy makers to have more disabled characters, so as to help those children less fortunate not feel marginalized. Like everything mountains are made out of mole hills and LEGO without saying anything were targeted due their mainstream popularity.

Now they have gone and created one, however bare in mind how LEGO plan sets years in advance, campaigners for the #ToyLikeMe movement are claiming it was down to their pressure that forced the move by LEGO.  A bit like when LEGO decided not to renew their contract with Shell and Greenpeace claimed a victory. LEGO in both cases are damned if you do and damned if you don’t. So far LEGO have yet to say anything officially and I would be shocked if they didn’t capitalize on the main stream publicity on this but I know for sure that LEGO developed the wheelchair long before the #ToyLikeMe was started last year.

But since when has facts stopped the media? Like anything with LEGO they don’t actually do any research in the matter and only get one version of events, for example here is a piece we got sent yesterday from Toy News to put out;

“LEGO has unveiled its first wheelchair using Minifigure at Nurumberg Toy Fair, in a move that the #ToyLikeMe campaign has deemed “massive in terms of ending cultural marginalisation.”

The figure of a young man using a wheelchair, accompanied by an assistance dog, is part of a new Fun in the Park set from LEGO City.

Atkinson, who is herself partially deaf and partially sighted, established the online #ToyLikeMe movement in April 2015 to call on the global toy industry to positively represent 150 million disabled children worldwide. With over 30k followers in 45 countries, Atkinson has since enlisted brands such as Playmobil, Orchard Toys, Lottie dolls and now LEGO to her ‘toy box revolution’.

“We are beyond happy right now,” said Atkinson.

“LEGO has just rocked our brick built world and made 150 million disabled kids, their mums, dads, pet dogs and hamsters very very happy. We’re all conga-ing up and down the street chucking coloured bricks like confetti! But on a serious note, this move by LEGO is massive in terms of ending cultural marginalisation, it will speak volumes to children, disabled or otherwise, the world over.”

#ToyLIkeMe is currently crowdfunding to continue their work and grow their organisation to celebrate representation of disability across children’s industries. They plan to create an online hub to connect customers with products which represent disability and keep up pressure on the industry. The crowd fund has already raised 20% of it’s target, four days after launching.

“#ToyLikeMe has received no funding to date,” explains Atkinson. “We’ve called in hundreds of favours since establishing, but if we are going to carry on we need to pull our heads out of the toy box and get some real funding to build on what we have already achieved and change the toy box for disabled children today, and those yet to be born.”

So are you pleased to see LEGO create a wheelchair user?, was it something that you think was missing from your LEGO City? Personally I was more excited to see the baby stroller with a baby minifigure, now THAT has been lacking from my city!!!!

3 thoughts on “LEGO Wheelchair creating a stir in the media”