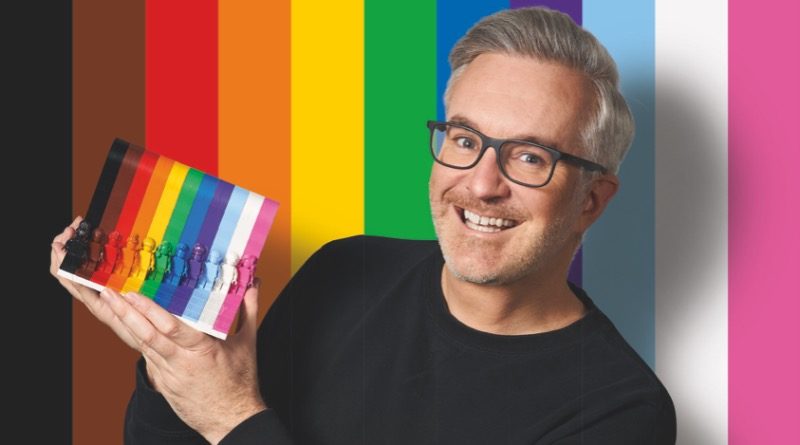 Matthew Ashton has revealed that he originally designed 40516 Everyone is Awesome for himself – but was encouraged to share it with the world by the LEGO Group’s LGBTQIA+ community.

The company’s Vice President of Design is the man behind the newly-revealed 346-piece set, which takes the colours of the community’s rainbow flag (along with bright light blue, white and dark pink to represent the trans community, and black and brown to represent the diversity of skin tones within the LGBTQIA+ community) and builds them into a celebratory display model, complete with 11 monochrome minifigures.

But while the finished set is now just days away from arriving on shelves for everyone to enjoy, it originally started out as simple desk décor for Matthew.

“I’d moved offices, so wanted to make the space feel like home with something that reflected me and the LGBTQIA+ community I’m so proud to be a part of,” he told The Guardian. “Other members of [the LEGO Group’s] LGBTQ+ community came by to tell me they loved it, so I thought, ‘maybe it’s something we should share’.”

The result is 40516 Everyone is Awesome, which takes its cues from The LEGO Movie’s ‘Everything is Awesome’ theme, and will launch on June 1 – the start of Pride month. For Matthew, bringing it to the masses has marked a very personal milestone.

“Growing up as an LGBTQ+ kid – being told what I should play with, how I should walk, how I should talk, what I should wear – the message I always got was that somehow I was ‘wrong’,” he said. “Trying to be someone I wasn’t was exhausting. I wish, as a kid, I had looked at the world and thought: ‘This is going to be OK, there’s a place for me’. I wish I’d seen an inclusive statement that said ‘everyone is awesome’.”

The designer told The Guardian that he was ‘really happy to work for a company that wants to be outspoken over such matters’, suggesting he’s also conscious of the fact that – as responses to The Guardian’s story on Twitter are already proving – there may be some backlash to the set from certain corners of the internet.

But as the designer stated in the press release for 40516 Everyone is Awesome, this is a set all about championing diversity. “I wanted to create a model that symbolises inclusivity and celebrates everyone, no matter how they identify or who they love,” he said.

“Everyone is unique, and with a little more love, acceptance and understanding in the world, we can all feel more free to be our true, awesome selves! This model shows that we care, and that we truly believe ‘Everyone is awesome’!”

Check out the set’s official announcement to learn more about 40516 Everyone is Awesome, then browse our full image gallery to take in every angle of the brilliantly colourful model.