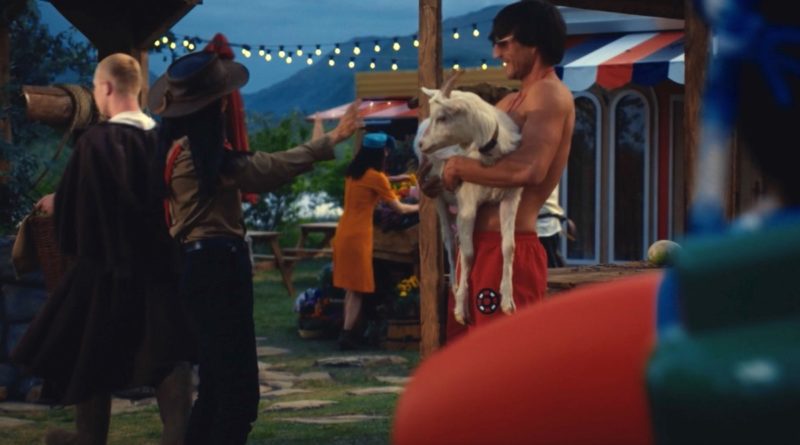 The LEGO Group’s latest Rebuild the World ad seems to weigh in on the possibility of the company bringing back its coveted goat mould.

As per its first two live-action Rebuild the World videos, the LEGO Group’s newest advert – which debuted earlier today – brings classic LEGO elements and minifigures into the real world, including a rubber duck ring, a knight’s helmet, a wrench and even Mjolnir (or Thor’s hammer).

All those pieces are put to use in helping the film’s knight to cross the river in his path, with the exception of one: a goat. At roughly 42 seconds into the clip, a surfer can be seen carrying a real-life goat towards the river – only to be stopped in his tracks by a woman who makes it very clear that the animal isn’t welcome.

While a goat is obviously no practical use for the situation depicted in the ad, it still feels a bit too on the nose given recent comments from LEGO designers. Clemens Fiedler’s original concept for LEGO Ideas 21325 Medieval Blacksmith included the return of the goat mould, which we haven’t seen in a set since 2011, but the final model swapped it out for a husky dog.

Back in February, Brick Fanatics (and other LEGO Fan Media) spoke to designers Wes Talbott and Austin Carlson about the challenges they faced in trying to bring back the goat, which now fetches incredible sums of money on the aftermarket.

“We all know the goat is coveted, because of how quick it ran and how limited it was,” Austin explained at the time. “The problem was that, with all the moulds that we have in the company, some of them have to be given up so we can make way for the new moulds. And [we had] such a big drought of not having any place to use a goat, so we’d lost the mould for that.

“We actually went to the Vice President of Design to talk about the goats, so we really did try to do the best we can with that, but even we have limitations with what we can and can’t do.”

The goat in the latest Rebuild the World ad could just be a coincidence, of course – or it could be a knowing wink to the adult fan community about the rarity and desirability of the LEGO version of the animal, and the LEGO Group’s apparent refusal to bring it back.

And if that is the case, don’t expect to see it return to production lines any time soon…