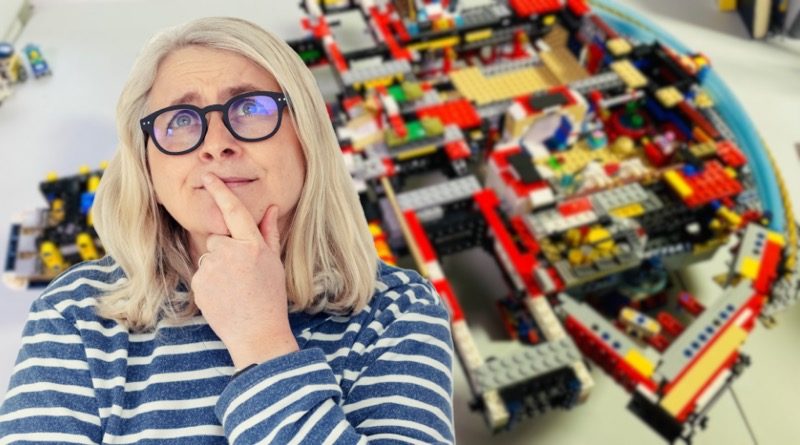 Author and screenwriter Emma Kennedy explains how she separates building LEGO for her YouTube channel and building for herself.

I was asked recently whether I build in my free time, simply for my own enjoyment, or whether I save all my pent-up LEGO-based needs for filming on Relax With Bricks. The short answer is: it’s complicated.

Filming LEGO in real time is, as you would imagine, time-consuming. There’s the build, then editing the footage together, adding on background music, putting in stings, and sprinkling in the finishing touches so each day’s film doesn’t look like it’s fallen off the back of a lorry or been dragged up from a clogged drain.

When you’re devoting the best part of two hours a day (and it’s occasionally longer) to your LEGO-based YouTube channel, it’s difficult to justify spending more time in the LEGO shed – I know it’s sometimes hard to believe, but I do have a proper job – but LEGO, despite having become another string in my career bow, is also my hobby, and hobbies need to be attended to.

For me, LEGO has always been a stress reliever, and if I’m having a bad day or simply need to take my mind elsewhere, I’ll head into the shed, not a camera in sight and make something. I’ve got a long-term project on the go – the Liza Minnellium Falcon – which I have now been building very, very slowly for over 18 months.

That may elicit gasps, but it’s been a painstaking process. I am attempting to make my own version of 75192 Millennium Falcon, but without using any grey pieces as far as is humanly possible. It’s going to be a vision of red and gold; a disco party spaceship for fabulous intergalactic travellers.

Whilst I have pot upon pot of bricks, small and large, finding the right piece in the right colour has been a challenge, and so from the off, when I have felt the need to build, I’ve done what I can, noted down the bricks I need, found them online in the colour I want and then waited for them to arrive. I’m currently expecting another delivery of Technic bricks in red and yellow. It’s like a never-ending Christmas. I’m nowhere near finished.

I had originally intended to time-lapse the Liza Minnellium Falcon build and for the first year, I did – and then disaster struck and all the footage was deleted in a tidy-up of my laptop’s storage that went horrifically wrong. I considered resuming filming, but I took the view that if it wasn’t from the start then it wasn’t worth it – and besides, it was perfectly okay for me to have things that are simply for me to enjoy.

And I think that’s the key to balancing whether I film builds or not. I love building my own versions of LEGO sets, and recently built 10185 Green Grocer and 10190 Market Street off-camera. Both sets are discontinued, and if I’d wanted to buy them on the secondary market I’d be kissing goodbye to the best part of £2,500, which is ridiculous and totally unjustifiable.

Instead, I buy the instruction booklets (I could download them, but I love a book in the hand) and use bricks I’ve already got. There were a couple of pieces that required a top-up, but the cost was minimal. The beauty of LEGO is that if you already have a large collection and have dismantled sets, you will almost certainly be able to build discontinued sets with your own bricks.

There’s a great website – Rebrickable – that offers alternate builds that can be made from the parts of any given set. So if, for example, you have 10264 Corner Garage, a delight of a set from start to finish, you could, should you choose to dismantle it, use the bricks to build an auto-parts shop, a pharmacy and repair shop, a café, an atelier and museum – it goes on and on.

It’s a wonderful way of extending any given set, and then, if you still prefer the Corner Garage, you can build it back again. Occasionally, I will do an ‘Author’s Own’ version for the AFOLWACs (Adult Fans of LEGO Who Are Chums) to watch on RWB, but because finding each piece is time consuming (unless I find all the pieces in advance), it doesn’t make for a thrilling watch.

But that’s fine: sometimes, slow and quiet and on my own is precisely what I need. 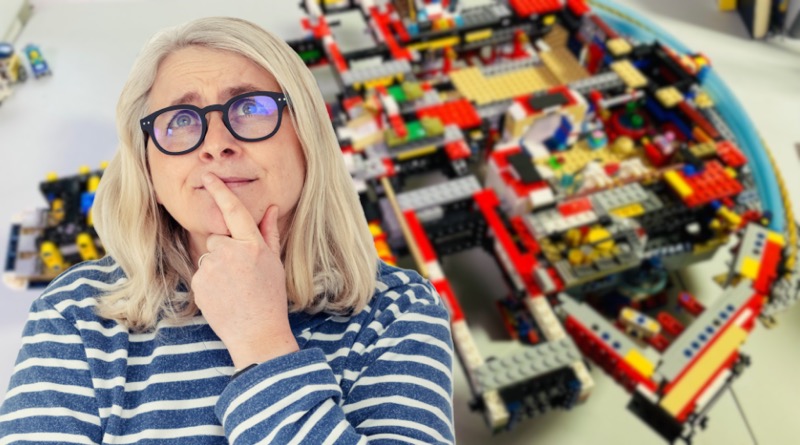