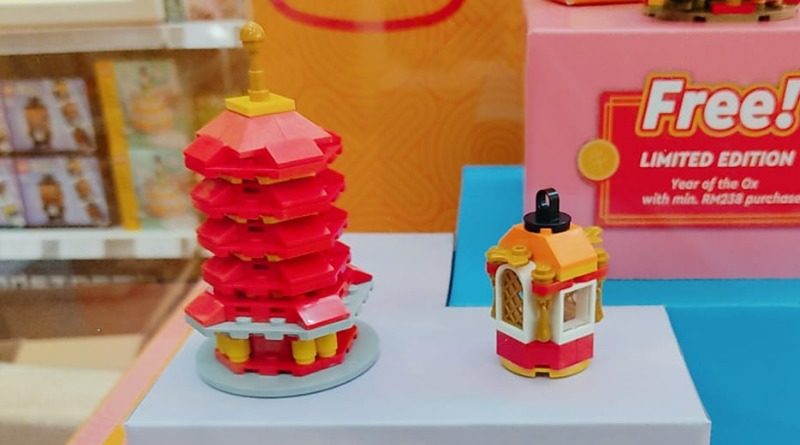 The two new Lunar New Year promos have popped up at a LEGO Certified Store in Malaysia.

LEGO LNY Pagoda and LEGO LNY Lantern were first revealed in an official promo video for 2021’s Chinese Traditional Festival sets, 80106 Story of Nian and 80107 Spring Lantern Festival. According to that clip, both the promo models would be available for free when purchasing those sets in a single transaction – we just didn’t know when or where.

Now, Eirik Lsa has revealed (via the Brickset Members Facebook group) that the models are currently available at LEGO Certified Stores in Malaysia. As expected, you’ll need to pick up both of this year’s Chinese Traditional Festival sets to grab them. The offer will run from January 4, presumably until stock runs out.

There’s no word yet on whether these sets will make their way to other markets, but don’t hold your breath. After all, while the LEGO Group has promised to abandon regional-exclusive sets, that commitment doesn’t extend to gifts-with-purchase – so these sets are free to remain exclusive to the Asia-Pacific market.

If you’re in the UK, you can at least console yourself by ordering 80106 Story of Nian, several days ahead of its original January 10 launch. 80107 Spring Lantern Festival is unfortunately temporarily out of stock – but as we noted in our review, it’s one you won’t want to miss, so head over to our stock alert tool and pop your email address in. We’ll then notify you when it’s back and ready to order.

Both Chinese Traditional Festival sets are still due to launch in the US on January 10.