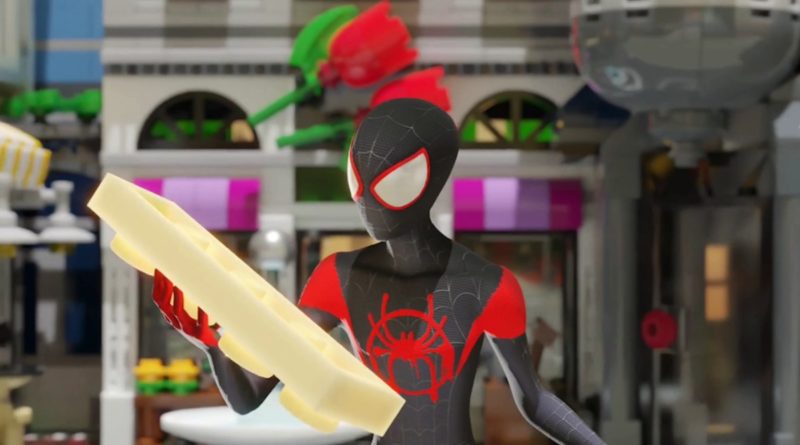 Spider-Man: Into the Spider-Verse never got a LEGO Marvel set when it was released in 2018, so an animator is merging them in a crossover video.

Arran Baker on Twitter has shared a unique animation from Studio Development Animator David Mackenzie, blending the worlds of Spider-Man: Into the Spider-Verse and the LEGO Group’s minifigure of the hero into one video.

The animator created the project using a model rig and moving it through the scene using the graphics software Blender. The full video can be found on his LinkedIn, with a condensed version uploaded to Twitter afterwards.

The smooth animation presented makes it appear as if this was a cut version of the final movie, with Miles having stumbled into a brick-built world only to find a Spider-Man minifigure under attack by Doc-Ock. Making use of the Modular Buildings around him to swing, Miles quickly faces the villain, taking a moment to put LEGO Spider-Man back together in the heat of battle.

The digital buildings around the scene, which include the likes of 10255 Assembly Square and 10278 Police Station, were all made by Kevin Mackenzie for the software. Whilst LEGO Spider-Man hasn’t been confirmed for the upcoming Spider-Verse sequel, the animation lets us live the dream of the minifigure hanging out alongside the multiversal team.

The minifigure picked for Doc-Ock also just happens to line up with the version of the character who will be returning in Spider-Man: No Way Home later this year, which will be getting an official LEGO set in 76185 Spider-Man at the Sanctum Workshop and two more inspired by other Marvel Cinematic Universe movies in 76184 Spider-Man vs. Mysterio’s Drone Attack and 76195 Spider-Man’s Drone Duel.