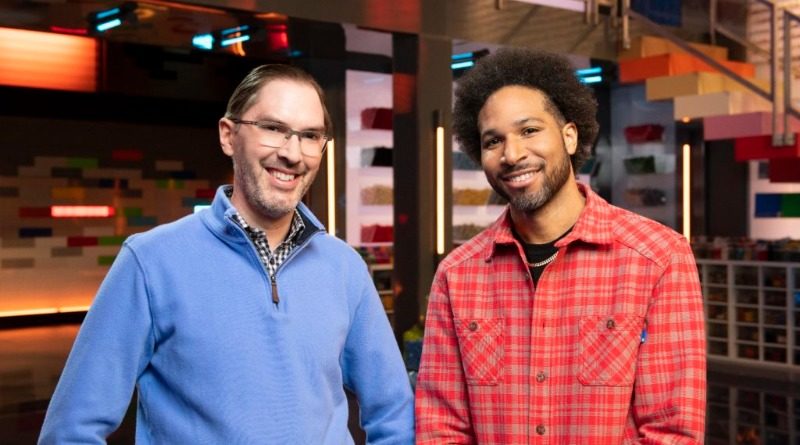 Friends Dave and Richard only built together for the first time on LEGO MASTERS USA Season 2 – but found that they had a ‘perfect partnership’.

We were lucky enough to sit down with all 24 contestants ahead of LEGO MASTERS USA Season 2, the first episode of which airs on Tuesday, June 1 at 8pm ET / 9pm PT on FOX. The 12 pairs of builders will compete with one another in LEGO building challenges for the chance of winning a $100,000 cash prize, the ultimate LEGO trophy, and the grand title of LEGO MASTERS.

Before the season debuts in just a few days’ time, here’s what we chatted about with Dave and Richard.

Richard: I have to say, we are a really well-rounded team. Our superpower is our versatility, being able to pivot and be creative on the fly, which is essentially the crux of the show. I think we really leaned into that.

What inspires your builds?

Dave: It starts in the smaller circle of the people in my family, connects to my community, my school community, my city community, my world community. I know a lot of people really enjoy building from pop culture and their inspirations, but for me, it’s the real world. It’s making those connections. I always feel like, as long as I’m building something that’s important to me and important in my life, I’ll never have regrets about what I build.

Richard: I couldn’t agree with Dave more. That’s really what brought us together. So much of our collective experiences go into everything that we love. In this case, we are from two very similar, but also very different types of cities. We’ve had mutual experiences, like collecting toys or following sports. I think the art and design of all of those things inform everything that we do. For me, 39 years of absorbing life, that’s really where the inspiration comes from.

What made you enter LEGO MASTERS together?

Richard: I sought out Dave because I was a big fan of his work. He had written and built a very profound Black Lives Matter piece and posted it on Instagram. I responded to it because it was very touching and moving. I felt like he understood the climate that we were in, this uprising. He wanted to use this platform and use his art to convey how he felt. We were in sync with that.

Dave: I had applied last year with my wife, but then she said she didn’t want to do it. A couple of other people had asked me to be their partners and I turned most of them down because I just didn’t feel like it was the right partnership. But when Richard asked me, I said, ‘Oh my gosh, of course I would do it with you,’ because I can’t imagine doing it with anyone else.

We connected so much, we’ve spent hours on the phone talking to each other, just talking about everything. That’s what really helped us, even though we had never built together before. I think the most challenging part was that we had never built together before, but we were able to connect on so many things that, in a lot of ways, it didn’t matter.

Richard: It all came very naturally. People said that we must have been friends for 10 years, but not in that cliche way when we finish each other’s sentences. We complemented each other in so many ways. It was just the perfect partnership.

What skills do you each have that complement the other?

Richard: I have a lot of really great ideas, I just get these flashes of brilliance. That speaks to me as a person, not just LEGO. It’s great that I have LEGO as a medium to funnel my ideas. I think it really comes from my creative vision for things and Dave is a great facilitator of those things.

Do you have any tips for other builders?

Richard: Don’t overthink it, in any type of situation. I have to learn how to take my own advice. I think that overthinking puts you in a box and you don’t allow yourself to be as creative. The system is built in a way to let you bend the rules, so I encourage people to bend those rules.

Dave: Being able to accept feedback. If you are just going to build in a vacuum and always think that you’re right, you’re never going to get any better. You have to be able to listen to feedback from people around you and learn from them.