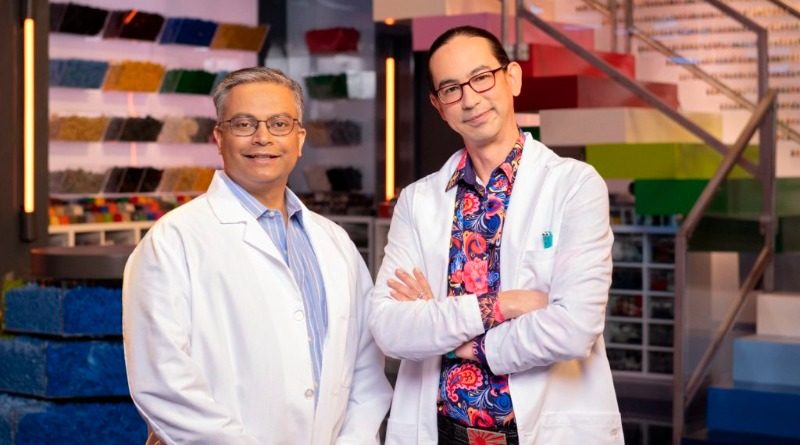 If you’re as excited as us for LEGO MASTERS USA Season 2, you’ll be keen to learn as much as possible about the 24 contestants. They will compete with one another in LEGO building challenges for the chance of winning a $100,000 cash prize, the ultimate LEGO trophy, and the grand title of LEGO MASTERS.

The first episode airs on Tuesday, June 1 at 8pm ET / 9pm PT on FOX. Before then, you can check out a quick breakdown of all 24 contestants or read on to find out more about the men behind the lab coats.

Moto: Technical ability and our science and education backgrounds.

How did you get into LEGO?

Moto: I got into the LEGO community five years ago. My turning point was when my first build was featured by The Brothers Brick. If it wasn’t for that, I probably wouldn’t have taken it to the next level.

Paras: I got into LEGO about five years ago, when I started my non-profit, Next Gen Smartypants. For me, when I had my daughter, that was a life-changing moment. I fell in love with her as soon as I saw her. She changed my life. I really focus on kids. LEGO has such an incredible ability to bring out their best. I’ve seen it. When I see the kids, their eyes light up when they connect with a concept that was foreign to them before. I can’t say enough about that moment and I crave that moment. I’m not an artist like Moto, my relationship with LEGO is a little bit different, with STEAM and with education.

Moto: I wouldn’t want you to be. We have very different skills and that’s the whole point of having a team.

Paras: The two of us working together and complementing each other was pretty strong.

Was there a particular LEGO set that got you hooked?

Paras: I have the bust of Darth Maul. I’m a Star Wars nut. In our Makers’ studio, we have a whole front window. It’s 15 feet wide and it’s all dedicated to Star Wars LEGO.

Moto: For me, my earliest memory of a LEGO set is when I used to play with my brother in the bathtub. After my son’s first LEGO set, I happened to walk into a thrift store in my local area and the same box and model was on the shelf. This is what inspired me to become an adult fan of LEGO. Once the memories came back and the feels from this set, it all went downhill from there. I can’t remember the name, it’s a triple-digit firefighter boat.

What was your biggest challenge building together in the studio?

Moto: The biggest challenge was not building together. We had a week in a hotel during quarantine as our first building experience. I think I put you through 8-10 hours a day. I was ruthless, but he was there and we did a lot of our training on the spot. You make do with what you have.

Paras: Even with that training, we didn’t have the opportunity to do every single thing, especially when you have a lot of pressure on you. We both have different styles and engineers can design things, but how you go about designing things can be a little different.

Moto: And terminology. A lot of the seasoned teams, they have got all their pieces down. All these things have to proceed rapidly.

What are your main takeaways from the show?

Moto: It’s the idea that you never give up, even against adversity when things aren’t going well, if you just persist and believe in yourself, even though the clock runs down, don’t surrender. I learned that from Paras. It’s a great life lesson.

Paras: I would voice it more succinctly in that: I hate that clock. It’s so menacing, it just towers over you. Builds take time to make them shine and that’s something you don’t have. It becomes about the best you can do in this extraordinary, high-pressure environment when you’re in the room with world-class designers and builders – and this ominous clock.

Moto: I would also add that training pays off. When I first applied, I started building 20 hours a week. I looked at it as an Olympic event, you had to be an Olympic-level athlete to train for it. I set up a schedule and set aside 20 hours a week to build, every single week, non-stop. After 1,000 hours a year, it’s like an athletic profession. It’s an amateur sport, but it’s the highest level of amateur sport you can achieve. I was very disciplined and I think that discipline works out.

What did you learn from the show?

Paras: For me, it’s a feeling. I loved being there. It’s like being in the Olympics for something you just love to do. You’re in this glorious arena and everything is focused on LEGO bricks. You’re surrounded by people, we became really close and they are my very close friends in a short time. It’s that feeling and environment that I still keep with me. It’s hard to convey, but it’s one of those spiritual experiences that I still feel.

Moto: The set is majestical. We could go on and on about meeting the judges. I had a disconnect from reality. You’re experiencing things that are real, but in my mind, it’s unreal at the same time. There’s that cognitive dissonance. Overall, once I got home, I was less concerned about perfection. I just smash something out and I’m not too worried about version one, I can go back and clean it up.

I used to work iteratively pretty quickly, but now, after being trained by that clock, I can reduce five hours to an hour and not be so frustrated if it comes apart. As long as the concept is looking great, I know it can proceed to a set-level quality and then an art-level quality. Whereas I used to spend a lot of time getting the structure down to near perfection before I was comfortably styling. Fail fast, fail often, try something else, be creative.