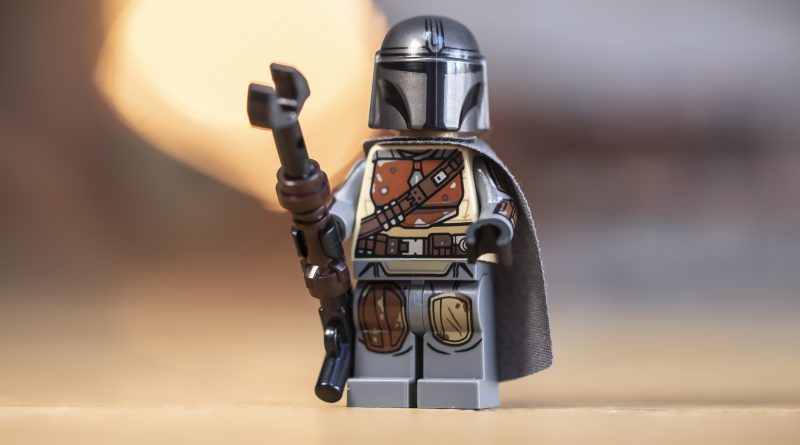 75331 The Razor Crest’s brand new Din Djarin minifigure adds arm printing to the original LEGO Star Wars character – along with one more detail you won’t have seen in official images.

When the LEGO Group unveiled its latest Ultimate Collector Series set earlier this week, it stuck religiously to the Mandalorian code by refusing to display Din Djarin without his helmet. (That’s more than can be said for the character himself, of course.) We’ve now got our hands on a copy of the 6,187-piece model for an early review, and we’ve unmasked Mando to reveal exactly what’s hiding under that helmet.

Following more than two years of blank black heads, the LEGO Group finally gifted Din Djarin an actual face in 75325 The Mandalorian’s N-1 Starfighter. What that minifigure didn’t include, however, was any hair – which we’re sure would have ruffled the feathers of actor Pedro Pascal, who’s probably very proud of his ability to avoid male pattern baldness.

The LEGO Star Wars team has now rectified that with its latest Mandalorian minifigure, however, as 75331 The Razor Crest includes an alternate hairpiece for Din Djarin. You can’t pop it under the helmet – the physics of tiny plastic toys don’t quite work like that – but you can swap the two pieces out as you see fit, rounding out the definitive version of Mando in his durasteel armour.

Fortunately for those of us unable to splash £519.99 / $599.99 / €599.99 on a single LEGO Star Wars set, the LEGO Group hasn’t come up with a brand new hairpiece for Din. Instead, the character is topped with an element that most of us probably already own, or can at least pick up for very little money on the aftermarket.

‘Minifigure, Hair Swept Back with Slight Widow’s Peak and Short Sideburns’ (or part number 25972 at BrickLink) has appeared in dark brown in 12 sets since 2016, including 21319 Central Perk, 76181 Batmobile: The Penguin Chase and 60298 Rocket Stunt Bike. If you don’t own any of those sets, you can currently pick it up on BrickLink for an average of 75p new or 86p used (so, erm, buy new).

You won’t get Mando’s printed arms (or improved helmet) from 75331 The Razor Crest, but adding this hairpiece to the minifigure from 75325 The Mandalorian’s N-1 Starfighter will at least give you the definitive beskar-armoured version.

Check out our full review of 75331 The Razor Crest by clicking here. You’ll be able to pick up the entire set from October 3 if you’re a VIP member, or October 7 if not.